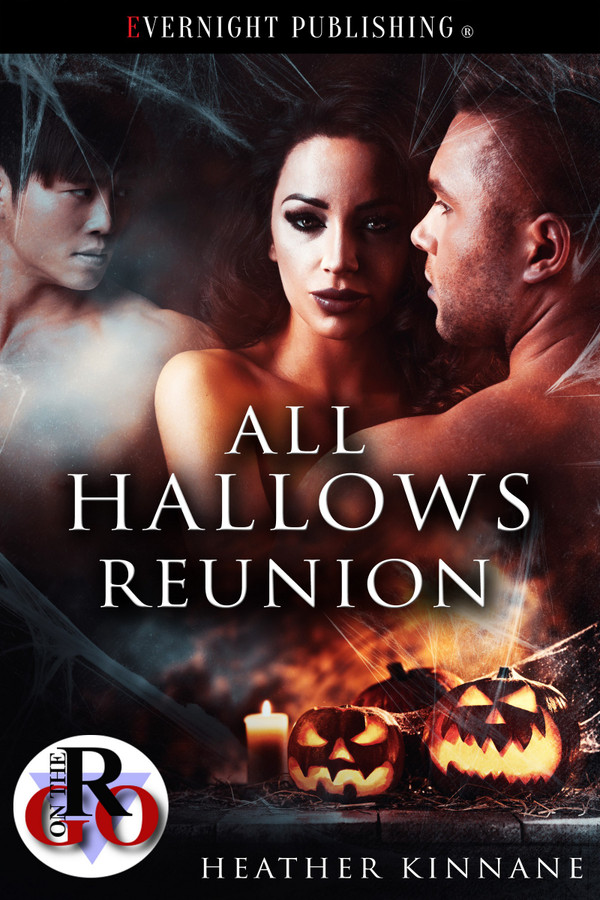 Liane and Toshi and Mason were lovers once, before the tragedy of Toshi's death sent them in three very different directions.

Ten years later, Liane and Mason meet again at a Halloween party and sparks fly. Mason’s been learning some interesting things, and he summons Toshi's spirit so Liane can say a proper goodbye.

Will it be enough for the three of them to let go, and for Liane and Mason to rebuild their relationship? Or will it tear them apart, for good?

Caitlin burst through the door. “What’s taking you girls so long? Tom’s pulled out the Ouija board. Are you ready?”

Liane shivered. “No thanks.”

Caitlin rolled her eyes. “Come on! It’s just a bit of fun. As if there’s any such thing as ghosts.”

In the living room, Caitlin, ghost-man, and Mason were kneeling around the coffee table. Liane assumed ghost-man was the Tom Caitlin mentioned because the rest of the party-goers were clinging around the edges of the room, watching.

Liane took a sip of punch as Ali joined them.

“Are you sure you won’t join us?” Mason’s gaze was intense as their eyes met. Liane was sure, but this was Mason, and it’d been such a long time since he’d invited her to do anything with him.

“Okay.” She pushed down the nerves in her stomach and squeezed in between him and Caitlin.

“All right, everyone. Hands on the planchett,” Tom said.

Liane ignored the butterflies in her stomach as she reached out with the others to rest two fingers on the moveable pointer in the center of the board.

“Take a deep breath, and clear your mind.”

Liane took a deep breath, but she couldn’t stop thinking about how close she was to Mason.

Tom’s voice dropped. “Now, I’m going to ask the question. Are there any spirits around?”

The butterflies in Liane’s stomach jumped as the planchett moved across the table.

“Who did that?” She looked from face to face, but everyone looked as surprised as she was.

The pointer moved from letter to letter. “L-I-A-N-E.” Ali read each letter in turn.

“It’s for you!” She looked at Liane, who felt a shudder travel down her spine.

Liane didn’t need Tom to say the words in full.

“What?” Liane’s face burned. “Are we twenty-eight, or eighteen? Don’t be so stupid.” She stormed out onto the verandah, avoiding looking at Mason as the room behind her erupted in a fit of laughter.

“It’s just a joke, Li!” Caitlin called, but Liane had had enough of their jokes. She rested her crossed arms on the railing and glared out at the night, the air cool on her flushed cheeks.

So much for being old friends. She didn’t know whether Caitlin or Ali was guilty of that little trick. They had both always loved practical jokes. Just as much as Liane had always hated them.

How could something be funny when you were laughing at someone else’s expense?

The door opened and she glanced over to see Mason approaching.

“I vant to suck your blood,” he replied in a poor Dracula impression.

Liane raised an eyebrow and turned to face the night again. She wasn’t in the mood for more jokes. “Ignore them,” she said. “They’re full of shit.”

He stood next to her, resting his hand on the railing so his little finger brushed against her elbow.

“I was rather hoping they weren’t.”

She looked at him in surprise. “What?”

His gaze held hers, and her heart began to flutter.

“I’ve never stopped thinking about you.”

She looked away. “You know where my parents live, and I haven’t changed my phone number in the last ten years. I’m sure it wouldn’t be too hard to find me on social media either, if you gave it half a go.”

Out of the corner of her eye, she saw Mason’s face drop.

He sighed and glanced back out into the night. “I never thought you wanted me to.”

Liane swallowed the lump in her throat. “What makes you think I do?”

“The board seems to think so.” He jerked his head toward the group inside, their attention back on the Ouija board.

“The board? You mean my juvenile friends.” It must’ve been Caitlin. Liane had barely had anything to do with her after college. They just didn’t seem to click anymore, while she and Ali had been stronger than ever.

Mason shrugged. “Maybe there is a spirit out there who’s trying to give us a message.”

“You believe in that?”

Liane was sick of speaking in riddles. “Aren’t you leaving again tomorrow?” she asked.

He shrugged. “That depends.”

“On whether there’s anything to anchor me here.”

She met his gaze, and her breath caught in her throat. She’d dreamed of this time so often. But could she do this now and risk all the heartbreak when he decided he didn’t want to stay, after all?

She looked away, up to the full moon.

He spoke first. “A ring around the moon. There’ll be a frost tomorrow.”

“My grandmother always said a ring around the moon was a sign of tragedy to come.”

He glanced at her. “Perhaps the tragedy would be in letting this moment slip between our fingers.”

She looked at him again. “Is that all this is going to be—a moment?”

He shrugged again. “I’m open to seeing how long this lasts, if you are.”

“Has it finally been long enough? Have you forgotten Toshi?”

He stepped back as though slapped. “I could never forget Toshi.” He glanced up at her. “But I hoped enough time had passed that you might’ve stopped mourning him.”

Liane glanced back up at the moon, surrounded by a billion dots of shimmering light.

Inside, her heart was aching.

“I still miss him,” she said, blinking away the prickle in the corners of her eyes. “You’d think a decade would be long enough, but every time I picture his face, I can’t help but think how young he was, how unfair it all is.”

“If he’d lived, you guys probably would’ve had some nasty break-up and wouldn’t be speaking to each other anyway.” Mason forced a laugh.

“Really?” Liane frowned. “I shouldn’t mourn him anymore because it’s likely we wouldn’t be talking to each other anyway? Is that what you think?”

Mason shook his head. “I’m sorry. I was trying to lighten the mood. That was a really daft thing to say.”

Liane looked out into the darkness, her jaw clenched. Somewhere out there was the ocean, hidden behind the trees, and if she listened carefully, she could hear the wash of waves upon sand.

Mason watched her, but she didn’t feel like talking anymore.

He broke the silence. “We can call him, if you want?”

With Me Now by Heather Hambel Curley

All I Desire by Heather Hambel Curley