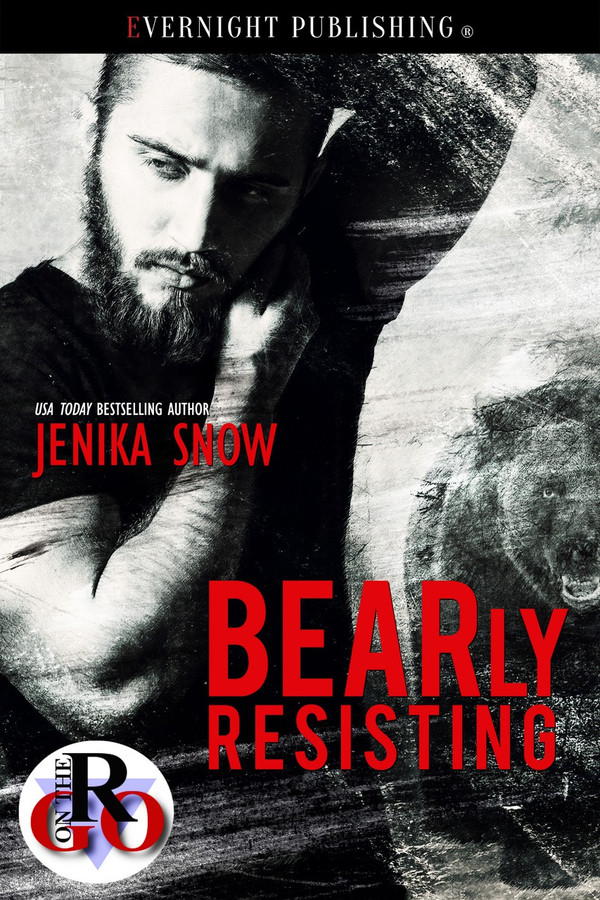 Killian knew his mate was out there. Being celibate in hopes he'll find his female hasn't been a hardship, but he's growing impatient.

And then he sees her. She's human, gorgeous, and will be his. He doesn't even know her name, but her smell is sugary and tells his possessive inner bear she's supposed to be his in all ways.

Alice planned a weekend of relaxation, but instead, she found herself mated to a bear shifter. Alice doesn't fight the attraction she has for Killian, not when she wants to be between the sheets with him in the worst possible way. Alice is single one day and mated to a growly bear shifter the next, but can it last forever?

“Come here, Alice,” Killian said, his voice still deep, but not so quite human any longer.

I found myself moving toward him, as if my feet had a mind of their own. Excitement and anticipation raced through me at the thought of what was to come. When I was only a foot for him he reached out, curled his hand around the nape of my neck, and pulled me forward. My chest slammed against his, my breath caught, and before I could even think his head was descending toward mine.

Our lips crashed together, and the spicy, masculine flavor of him invaded my senses. I couldn’t help but moan, my mouth parting slightly. He took that opportunity to delve his tongue inside, stroking mine, fucking me like I wanted him to do between my thighs.

I don’t know how long we stayed in that locked embrace, but the growling noises he made had me wetter than I was even comfortable admitting. My panties were soaked, and all I could think about was ripping this damn dress off and letting Killian have his way with me.

I wasn’t complaining in the slightest.

But the gasp I heard had me breaking the kiss and turning to see an elderly couple standing on the other side of the doors. They were both dressed expensively, and I could only assume they were heading down to the banquet. I found it humorous the woman’s eyes were wide and she had a white silk glove covered hand placed over her mouth, like she’d just caught us fucking instead of making out.

I couldn’t help it. I started laughing.

I enjoyed this sizzling hot paranormal romance. The steamy plot easily captured my interest. It had a strong heroine, a sexy alpha male, and crazy hot sex. Alice wasn’t looking for excitement but she sure didn’t run away from it either. I liked that about her. She had a naughty fantasy about having wild sex with a shifter. She was drawn to the right place at the right time and met Killian. He was a sexy bear shifter looking for his mate.These two had a wild night of hot shifter loving, scratching, biting and mating. Yes, they were true mates. This short story was a quick read. For the most part the only drama was Alice understanding that Killian meant business when he said he was keeping her as his mate. This was a short book that seemed to fly by at a super fast pace. I liked the characters and the story. So looking forward to more books from Jenika Snow.

Alice planned a relaxing weekend getaway to spend some time with her friend and to maybe let her hair down and experience some excitement from her boring life. She found it alright in the form of a tall, dark and sexy bear shifter who rocks her body with just a look. The heat between them is uncontrollable and neither is about to fight their desire. Killian is growing impatient it seems like he has been waiting forever to find his mate. He is shocked when he sees Alice, a stunning and curvy beauty and his mate. He might not know her name but her scent is sugary sweet and powerful enough to have his bear rising to the surface ready to claim its mate. In BEARly Resisting, author Jenika Snow gives readers a sweet and sexy little escape that is sure to heat up those cold winter night. With its short format or canvas the author successfully works her magic with a plot focuses on the hero and heroine, their meeting and their mating. That saying with her attention to detail and imagery, the author vividly captures the reader’s attention making them feel like they are part of the story. I am afraid if you are a reader who craves, suspense, conflict, drama or danger in their stories this might not be the book for you. But if you are a reader who enjoys an insta-love kind of romance than this is the book for you. Told in both the hero and the heroine’s point of view this insightful tale is smart, sexy and delightful. Wonderfully written, Killian and Alice are splendidly rendered characters that capture the heart with the sparks and high voltage desire as well as the tenderness that occurs between them. The relationship is like a grown up fairytale-with all the joy and anticipation you loved as a child. A dashing, sweet and sexy hero and a daring, fresh and curvy heroine, Killian and Alice create plenty of sexually charged heat to set the pages on fire. The sexy bedroom play is seductive, tender and passionate. Readers will be sad to see this one end,

Alice is looking for a good time. A weekend of drinks with her friend at a lodge and maybe more if someone catches her eye. That &quot;someone&quot; is Killian. Alpha of his pack and owner of the lodge, he is the whole package of weekend delight. But he&#039;s looking for something too. Killian has been searching for his mate for 20 years. Alice&#039;s shifter knowledge is sparse but she&#039;s about to get a crash coarse. If Killian has his way she&#039;ll be his forever. As always I love Jenika&#039;s books. My only complaint I ever have is I want more of them! They&#039;re way too short and I&#039;m always so disappointed when they&#039;re over. Result, because Jenika always has another found it was for waiting on the sidelines for release. I can&#039;t wait for the next one.

I adore Jenika Snow and she does a great job writing quick hot short alpha shifters. Bearly Resisting is one of my favorites. He&#039;s been celibate since he was 19 waiting to find his mate so once he does he&#039;s got lots of pent up aggression to take out on her. She&#039;s one lucky lady. So of you love hot alpha shifters who are loyal then 1-click this sexy panty dripping read today

What a great romance on the go read ! I enjoyed the original version titled feral craving but this re-write/ re - release is even better! The chemistry sparking between Killian and Alice is undeniable and it is all kinds of wonderful insta lust, scorching hot passion and mating! It may only be short but it certainly will make you hot under the collar, I just wish it was longer! Happy Reading!

I love Jenika&#039;s shifter stories and this revamped one is great! Killian has stopped having meaningless sex with women because he is waiting to meet his mate. He&#039;s a bear shifter and had never imagined that he would meet up with Alice, who was in town for the weekend parties with her best friend. As soon as Killian sees her, his bear KNOWS that Alice is theirs! This is a hot and short little story with instant love so if you don&#039;t like those in a book, you might want to skip this one, but if you do, get ready because once this bear scents his mate, she&#039;s done for! Loved it and can&#039;t wait for more books by Jenika!!

When Killian was younger he decided to stop having sex knowing he would find his mate one day. Alice knows there is something missing in her boring life so she heads to her best friend&#039;s cabin for the weekend. She knows the little village is filled with shifters and hopes she can meet a hot sexy shifter this weekend. Little did she know what was in store for her. Killian meets Alice at a dinner and knows she&#039;s the one. Does Alice believe Killian when he tells her she&#039;s his mate? You should definitely read this short sexy little read. I really loved BEARly Resisting. When it ended I was sad it was over. I really really really wanted more. Jenika is so amazing!! Love all her work!!