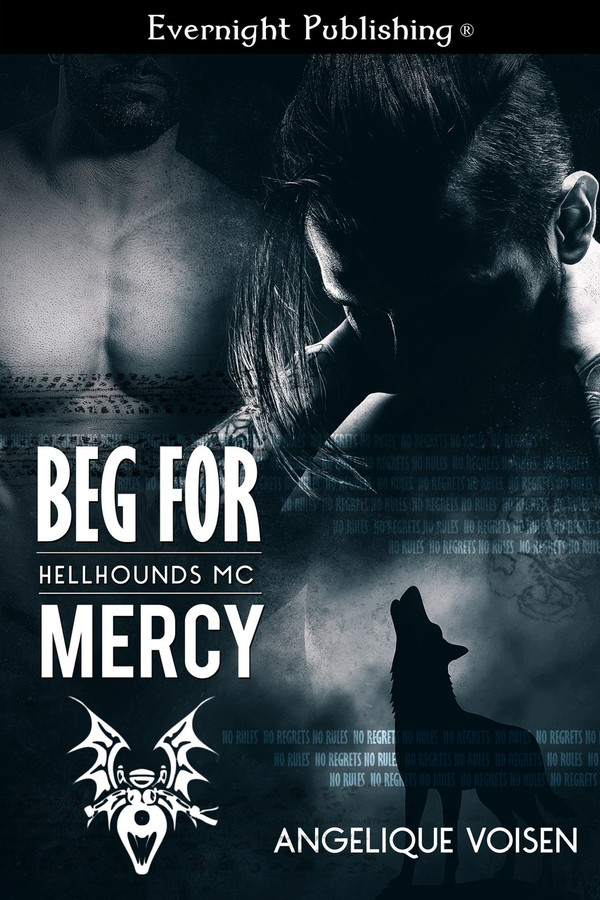 They call him Mercy because he gives none to his enemies...

Before becoming a patch in the Hellhounds MC, Mercy was a healer and a lover. Now Mercy’s bent, not broken, a beast living in the skin of the man. Mercy thought he had nothing left to lose, until the past comes back to haunt him. Former lover, thief, and liar, James Carlson is a dead man walking after betraying Mercy years ago. But Mercy knows once he gets a taste of James he won't stop until James is his—to own, protect, and love.

Too bad James only sees him as a stop on the road. James has crossed some very bad men and needs temporary sanctuary. He’s begging for mercy, but Mercy isn’t sure he has any left to give.

“James, are you awake?” Mercy asked. “Stop fucking with me.”

No answer. James moaned again, fingers grasping Mercy’s shirt, pulling him close. Careful of James’s leg, Mercy settled himself more comfortably beside James. He might have bulked up considerably, and James might have lost a lot of weight, but their bodies still fucking molded against each other. A perfect fit.

Eavesdropping hadn’t been Mercy’s intention, but he heard James and Ezra talking through the door separating his room from the clinic. Too much hate existed between them, James had said. Fuck, but James was right. Nothing good would come out of this. After all, Mercy never expected James to ever come back into his life, but Revo made a valid point. He didn’t believe in coincidences, but James didn’t come back to him. James sought escape. Always did, but from what, Mercy never knew.

James began clawing at him, and Mercy wondered what chased him in his sleep. Without thinking, he grabbed James’s wrists, restraining them. To his surprise, James’s breathing didn’t grow rapid. Calming down, all the tension drained out of James’s body. Mercy didn’t let go until James’s heart returned to its normal rhythm. A different kind of dream plagued James now, judging by the erection poking through the jogging pants Ezra lent him.

Startled, Mercy released James’s wrists and narrowed his eyes, wondering if James was wide-awake all this time, toying with him. It didn’t escape him James uttered Mercy, not Derek, not the shell of a man he used to be, foolish and idealistic. James touched him again, the movement curious, fingers slipping under his shirt, tracing his abs, the ragged scar that spanned underneath.

Breathing hard, Mercy let James explore before cutting in. James slipped his hand lower, touching the hem of his jeans. No fucking away a sleeping man could work the button of his jeans. James undid the button, no doubt finding Mercy didn’t bother with underwear. Electricity traveled from James’s fingertips to the slight dusting of hair leading to Mercy’s hardening dick. Smirking, Mercy closed his hand over James’s wrist, sensing the change in his breathing.

“Do you like what you found, little thief?” Mercy asked, as James’s eyes flew open.

“You know I do,” James answered.