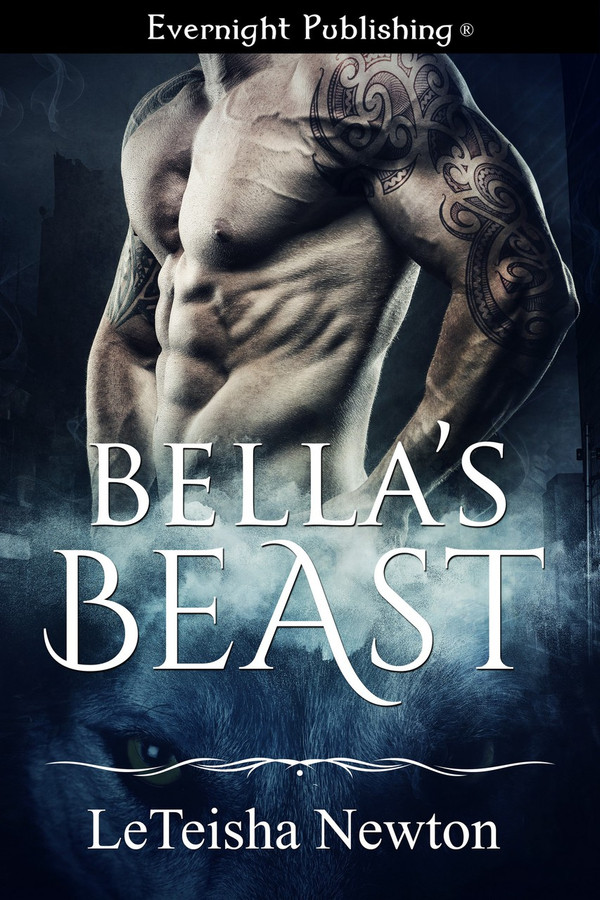 Isabella Thomas has a problem that she can't take care of. Her brother is a compulsive gambler that can't say no to the rush of another big win—despite Isabella's losses from bailing him out.

This time, Isabella has no house, car, or funds to give up for collateral and her only option is Elijio Vargas, the Beast of the Darkness, a man cursed to walk in the daylight as a wolf. The Beast chooses to save her brother—under one condition: Nate's debt is now Isabella's, and the new deal is for her body.

Isabella can't stop herself from giving in to Elijio, and he can't stop himself from remembering that he does have a heart, and she's quickly stealing it. Will Isabella be saved, or will Elijio have to show just how much of a beast he can be?

“I need Pace … Yes.” He paused with the phone to his ear. “It’s Elijio. Pace, I’ll pay the debt for Nate Thomas.” Elijio raised one eyebrow before narrowing his eyes and spoke slowly into the phone. “He’s covered. He needs to be home, in one piece and no worse than he is right now, within the hour.” He paused once more, listening into the phone. His voice, when he spoke again, was colder than ice. “Don’t make me find you, Pace. We both know that isn’t what you want.” He listened again. “Good. I’ll have the amount wired. How much? Done.” He disconnected the call and slid the phone back in his pocket.

“Twenty million,” he said to her.

“That’s how much your brother is in for. Twenty million. I’ve taken care of it. If you need the proof, my butler will bring you the paperwork and you’ll get proof of life within the hour.”

Bella stumbled, nearly falling, but Elijio spun and grabbed her, faster than should have been possible. She sucked in her breath, that same familiar shock twisting through her. Heat blazed over her nerve endings as she curled her fingers, gripping his biceps in confusion. No one, ever in her life, could make her lose her head like he could. His eyes dilated as he started at her, nostrils flaring as he inhaled roughly. His tongue flicked out of his mouth, as he ran it over his lips, tasting the air. God help her, but she wanted him to taste her. She gripped him harder, pulling him toward her without even realizing what she was doing until his face was close to hers. She felt heavy, her pussy throbbing with her heartbeat and her mouth going dry. She wondered what he would taste like. If his tongue would be slick and cool, or hot and damp. She wanted him. She wanted to give in. She couldn’t look away from those eyes.

“Please,” she whimpered, not sure if she was asking for his kiss, or begging him to release his spell on her. She gasped, but before she could say anything, his mouth was on hers. His tongue slid into her lips, sliding wetly against hers. He didn’t ask, or seek, he dominated. He disentangled her arms from his biceps and made her clasp her hands up over his shoulders and behind his neck. His strong hands gripped her head, turning her head for a better fit. His lips, full and yet firm, glided over hears with masterful ease. She moaned, the juice-laced taste of his tongue making her head spin. No other part of his body other than his hands and mouth touched hers, but she felt the connection deep in her gut. Her nipples hardened, her stomach shook, and her pussy moistened. This was desire, this was lust. All thoughts of being here for payment flew from her mind.

She couldn’t think of any reason not to be in his arms. It felt too right. Too explosive to ignore. She pushed against him. The rock solid shape of his abs slid against her ribcage as her breasts were crushed against his diaphragm. Again she was struck by his height, and the way he curved around her. Her touch must of triggered something because he gathered her up into his arms and lifted her off her feet. He broke the kiss and nipped her bottom lip. She swallowed convulsively as he sucked his way down the side of her throat. He bit at the pulse at the base of her throat.

“Ah,” she cried out as he licked the sting away, only to do it again.

This man was rearranging her, and she couldn’t fight it. She sank into him, tightening her arms around his neck and sliding her fingers into his hair.

He growled, the sound rumbling through her as he pushed her up against a wall. The shock of the cold had her arching her back, forcing her body even closer to him. The shift rubbed his cock over her teasingly. She wrapped her legs around him on instinct and he ground his cloth-covered cock against her. Her thighs shook as she held him close and fought the urge to open wider for him. She whimpered and moaned. She thrashed against him and pulled him close. She fell under the wave of his desire as he took her mouth again in a punishing kiss. She could do nothing more than hold him tight against her. His hands left her back and traced their way to her front. He lifted enough away from her to mold her breasts, plumping them with skillful strokes.

“That’s right, baby, give in,” he said, and his voice galvanized her. What was she doing?

“Stop,” she said, between deep breaths. His eyes flared with something, something she couldn’t described before he stepped back, letting her fall to her feet hard enough to jar her teeth.

“You knew what you were here for.”

“I did my part of the bargain, but it’s just as easy to change it. Each time you sleep with me, it’ll take a million off your debt. I’m sure this is the best paying job you’ve had in your life.” Before she could think she reached up and slapped him, the sound echoing in the hallway. Her hand stung from the impact. Elijio roared. Actually stepped back from her, crouched, and roared. The sound filled the hallway, and sending fear curling through her.

I loved this revisit to the Beauty and the Beast story, I enjoyed the little touches of the original slipped in.... along with the super steamy upgrade! I really loved it and can&#039;t wait to dig in to the rest of the Fairy Tale series!

How far would you go to help family? Bella has time and time again, helped her brother to no avail. When a handsome saviour comes into her life to change things around for her, can she continue to save her brother to her detriment? This story has the makings of Beauty and the Beast with a sensual and beautiful woman as beauty and a strong, handsome but aggressively powerful man as the beast. When Bella goes to the most sought after deadly man in the city to save her brother’s life from years of gambling debt, the means of which she lowers herself to save him is something she has to live with for the rest of her life. In the midst of her emotional decision, she discovers the bitter truth and finds a love so strong that it binds her in ways she cannot imagine. This fairy tale is well written. The author takes one of the most loved stories and turns it into an adult, sensual story imbued with a meaningful message to her readers. Bella is a character whose heart is filled with love and compassion and through her personal struggles, she finally finds her way. Elijio Vargas is a good looking but hard hearted man until he meets Bella. You will fall in love with this couple as they compliment each other so well.

I have always loved Fairy Tales and this one was a great spin on your run of the mill Fairy Tale. I am glad I bought it. As all great stories you hate for them to end or you seem to want just a little more and this one is no different but I am satisfied with the end. Hope you like it as much as I.