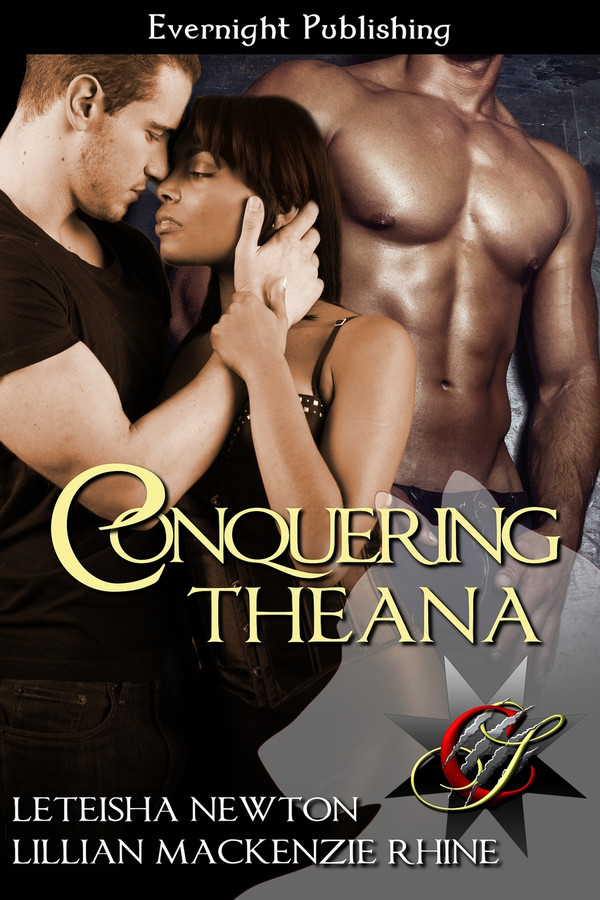 Theana ran from Seurri City, home of the wolf shifters now public to humans, to escape a mating with her childhood friend. She wasn't in the mood for a mate, or the trappings of politics. Then she meets Rafael, alpha of the strongest pack in Seurri, and his beta, Gregori. Suddenly she can't catch her breath, or keep control of her emotions.

Rafael and Gregori refuse to let Theana get her own way, or deny the love they could share. Perhaps two men for their feisty mate are definitely better than one. Now to stall the would-be childhood suitor, and stop an all out war between the packs—but love is worth fighting for.

A few stops before the ground floor the elevator stopped, and a man stepped in. And what a man. He probably was taller than she was by a couple of inches. His short, chocolate hair was cut ruthlessly to frame his ears. His lips were full, bitable really. He had a strong jaw, and his face was built on stark lines, almost severe, and yet the twinkle in his dark eyes was inviting. He gave her a lopsided smile, and then his nostrils flared. The movement was one of a shifter, and she went on edge. Human men were easy to deal with, shifters, not so much. She sniffed delicately, and took his scent in. A myriad of emotions assailed her. Pain, happiness, weariness, shock, all filtered through her as she watched the man before her, dumbfounded.

"Delicious," he grumbled, staring at her now unblinkingly. She froze, her inner wolf watchful and perky. Wait, perky? She asked her wolf what the hell was going on, but she got no response, just the feeling of butterflies in her tummy as her wolf wagged her tail and yipped.

"My name is Gregori, beta of the Ulric clan. And you are?" he asked, extending a long-fingered hand.

"Theana," she said, not able to stop herself. She normally steered clear of shifters that were as high ranked as this one. Second only to an alpha, betas had enough bite to their bark to stand unchallenged. She was for an alpha, of course, but that didn't mean that he couldn't put her on the radar for his alpha. She had never met the alpha of the Ulric clan, known to be the strongest of the wolf packs. That was enough for her to leave him alone. Alphas were all the same: bullheaded, arrogant, and a chip the size of the world on their shoulders.

"Very nice to meet you."

His voice rolled over her like hot chocolate on a cold winter's day. There was a growling quality to it, almost a rumble. She felt her knees go weak, her pussy moisten, and her nipples harden. He smelled so good. Like fresh baked bread and the wild. She breathed in, taking his scent deep into her lungs, her eyes sliding closed. Damn. Opening her eyes she looked at him again, seeing his half smile still on his face. This man was dangerous. Looking like that had to be illegal in at least every state in the US of A. Probably in some other countries as well. Her wolf yipped again, rolling inside and exposing her stomach. The action signaled something to Theana, and she froze, everything in her shattering.

She watched him, saying nothing more. No, it was not nice to meet him. There was no way her wolf was getting all excited about a damn beta. A beta! You don't want an alpha, remember? A little voice growled to her, and she growled back. She didn't want a mate period. She was also not made to be a beta's mate. She knew that, didn't she? Gregori held onto her hand, his fingers warm, smooth, and strong against her hand. He wouldn't back down, not without a fight and her wolf howled inside of her. Shut up, she hissed, but her wolf ignored her. As if he heard it, Gregori stepped up to her until his chest was just a breath away from hers. She dared not to breathe. She didn't want to touch him, no more than she already was. Her body was fighting her, treacherous thing that it was, to get closer to him. His nostrils flared again, and he smiled. A devastating, beautiful smile that was more wolf than man. His teeth were so white they were nearly blinding as his canines extended. He had six, like she did. Three on either side of his front teeth, a mark of a wolf that could be a leader, if he chose. Her wolf whimpered, wanting him to bite her, to mark her.

She lost track of time as she stared at him, his dark eyes going gold. He was reaching out with his wolf, she could feel it. Feel his essence trickle over her skin like a warm breeze until her flesh felt flushed and hot. Her wolf reached out as well, wanting the connection, needing it. Everything in her was shifting, moistening, thickening, until all she could think about was touching this man before her. She was in a haze, unable to fight herself, or what was happening. Gregori took that last step forward, and her body was flush against his, her breasts crushed against his diaphragm. He was so big. She moaned, her eyes sliding closed as his lips slid over the side of her neck. She hadn't even realized she'd exposed her throat, given him access to her. His breath was scalding as he nipped at the flesh there.

She came up on her toes and wrapped her arms around his neck, pulling him closer. When his arms slid around her, she felt the strength in his body, the ability to hold her if she fought, if she tried to get away. This beta was stronger than she could have imagined. Ulric clan, she thought, and the thought was like a bucket of ice cold water over her. They were the strongest of all packs, ruled the other packs, even with the Council as advisers. This beta was even stronger than her alpha, and, at this moment, that terrified her.

"No," he whispered against her neck. "Don't fight me, Theana." He pulled her tighter into his embrace, nipping her neck harder, a warning. She fought her wolf's inclination to submit. She was supposed to submit to her mate, but she was also a woman. She was not just her wolf. She wanted no man. She would not be bartered off because her genes told her this man was strong enough to overpower her, to give her pups, and provide for her. It wasn't enough. She wasn’t ready yet to give in to the natural order.

"Let me go," she said then, her voice more breathless than she wanted it to be.

"You know I can't," he answered, his tongue snaking out to taste her flesh. He blazed a trail to her jaw and nipped again before he looked into her eyes.

"What a wonderful day this is," he said before his lips claimed hers.

So hot. His lips were like fire to her bloodstream. He slid his tongue in between her lips, taking his time licking over her teeth before sinking further into the depths of her mouth. She clung to him as his tongue dueled with hers, fighting for purchase. His arms clenched around her as he sucked on her tongue, and she went crazy at the thought of that at any time he could slice her with his sharpened teeth, that they were just on the edge of violence. She had never felt desire so strong. Her heart was pounding, her mind fuzzy, as her wolf lifted her tail high, fanning it before the male behind her.

Theana felt the impact of the elevator wall at her back, the groan as the cables readjusted. She was off her feet, legs wrapping around his waist, before she could even think. His cock, thick, long, and delicious, ground against her mound as he kissed her harder. Never, never had she thought it would be like this. The ping of the elevator and light flooding in confused her for a moment, and then mortification slid over her when she heard laughter over Gregori's shoulder. He stopped kissing her with a sheepish grin and lowered her to her feet. She placed a hand on her chest, over her beating heart, as she tried to control her breathing. Gregori turned, blocking her from view.

I love finding new authors because it opens the world to new and exciting reads. It’s a pretty common shifter story in that the humans accept the shifter, but only face to face. There will always be some type of organization after the shifter community. I love a strong female character with a good mix of sass and brains. I really liked Theana because she’s a little strong in the first chapter, then she toned the whole I’m better attitude. Translation: she’s a bit spoiled. Her father let her run wild most of her life. Theana isn’t quick to lie down and take orders, nor is she in any hurry to be mated. She has made a point of only being with wolves lower ranking than her, although that didn’t make much sense to me. The males were the typical alpha type, but I liked the alpha right off. This alpha cares about his beta and knew how to put his beta at ease. How the Alpha and beta grew up together and how they formed a bond was really good. They’ve shared women before but a mate? No. And if they did, where does the beta fit in? Is there rank in a relationship? There was the nice show of strength, power and passion along with a few yummy scenes to sweeten the story. I liked how the authors threw in a wee bit of danger as well as keeping the conflict simple. This looks to be a first in a series. Because of the secondary characters I’d think, that another book will come at some point. The writers didn’t leave me hanging though, which I liked. The length was decent and there was just a bit of back ground. It wasn’t a knock my socks off read, but I liked and enjoyed it. If you like wolf shifters, then hop over and grab this read. I’m sure you will enjoy it I did.