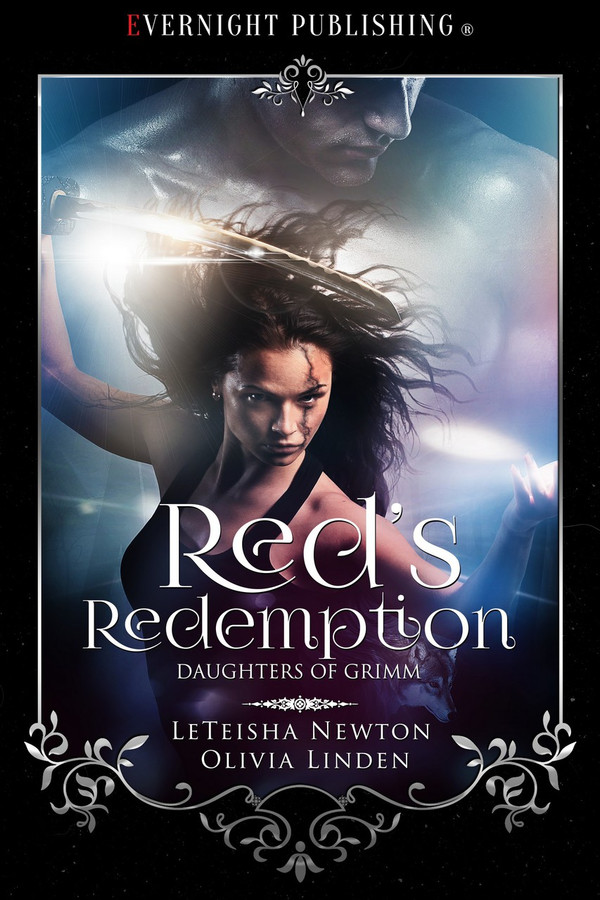 My name is Red…and I kill things for a living.

I was never supposed to fall in love. All I knew was hate, fighting, and killing—and I did those things very well. That bastard of a wolf stole the only person in the world who ever meant anything to me...and losing her broke something inside of me. That was until I met Lowell...and suddenly I didn't know what was up or down, who I could trust, or why the one man who made my heart beat again would hide a dangerous secret from me. In the end, would my hate cause me to crash and burn, or could I redeem myself of all the wrong I’ve done?

“You’re telling me a Shikome is hunting your family?” Red asked, and I felt like her voice went right to my damn gut. This had not been the plan at all. Chriselda Barnes was not supposed to be the most beautiful woman I’d ever seen, with dark wavy hair flowing down her back, long enough to make me want to wrap it around my wrist as I rode her. She wasn’t supposed to have creamy white skin that I wondered what it would taste like and if it would flush under my mouth. She was not supposed to have full lips so red that I couldn’t help to think of other things she could be doing with it, in much more sensitive places. Or have a body that was curved in all the right places, perky full breasts that I wanted to take a bite out of, and toned with enough definition that told me that she knew how to use her body in a fight. She wasn’t supposed to make my mouth water.

No, Red was supposed to be a woman that I could kill and not think twice about it.

My wolf was clamoring, singing to me, and I knew that the woman I’d created this bullshit hunting mission for, just to get her out alone so I could kill her, was my mate, and everything was going to shit. I’d only known her as a name, a phantom that most paracreatures feared because it was her job to get rid of them. Most of the time I didn’t give a damn about what she did, until she’d killed one of my packmates. Then she’d become my problem. One that now I had no idea how to handle.

If I had ever dreamed that this was going to occur I would have done some reconnaissance before agreeing to the plan to hurt her. I had been angry. Lost and hurt that by my order, one of my wolves had been in the position to fall under her hand. When we’d heard about rogue wolves moving in and harming humans I’d immediately thought that it was Adolpho—a vicious and nasty alpha who ruled his pack with pain and fear rather than strength and compassion. From the few run-ins I’d had with the ape-shit batty alpha I’d always left with the thought that I’d have to go at him one day. That Adolpho would eventually cause the fragile truce we held between us to snap because he didn’t seem to have a fucking care for what he did and who he hurt.

But to break a truce between packs could only be for two reasons: the possibility of exposure, or direct harm. It was with that thought in mind that I’d sent Peter out to investigate death from rogue wolves. If Adolpho’s wolves were to blame, and not actual rogue wolves that all shifters in the surrounding area would be driven to exterminate, then Adolpho was violating the truce, and I would be free to exact retribution. The whole thing was a mess, and now I wasn’t sure who the players were. I had to claim my mate, convince her of a fake attack, and make her understand all wolves weren’t bad, all while watching out for Adolpho, maintaining secrecy, and keeping my pack secure.

“Lowell?” she asked, lifting one brow in question. What had she said? Oh, that’s right, the Shikome. I cleared my throat, struggling to get my thoughts in order. Meeting her had completely taken me off my game.

“Yes, a Shikome, if that’s what it’s called,” I added, sticking to acting like I didn’t know what I was talking about. “She’s been targeting the kids in my family. I live on a homestead on the other side of Ridge Forestry Division, and there are several group homes on the land,” I answered, remembering my story. There was no way that I was going to blurt out that she was my mate and belonged to me. She killed my kind for a living. She would sooner shoot me with one of the guns I smelled on her than smile and accept.

“Ridge Forestry Division, huh? I haven’t heard Grimmville called that in a while.”

“I made a point to not call it Grimmville when I moved to the other side, but now … maybe that’s a better name for it,” I finished. Grimmville wasn’t some horrible, dark place as its name implied. It was beautiful, wondrous, and held so many secrets. But, like any place, there were those that could make it very dangerous. Hell, Red helped make it dangerous, whether she saw it like that or not. Funny, she was a lot like Grimmville—dark, sexy, edgy, and with just enough bite you had to be wary. Perfect.

“I can see that,” she said then, interrupting my thoughts. “They tend to like the life force that they can get from children. It’s purer and more vibrant than from adults. How many children have been afflicted?”

“Still alive? Or in a comatose state?”

“Coma, so far. But she’d been coming back to the same three children.”

“She will until they can’t build up their stores any more. Then she’ll kill them and start on the other children in your family. How many are there?” She jotted down notes as I talked. I’d have to be sure to keep my story straight. Easier to stick closer to the truth.

“Six,” I answered, counting the children in my pack right then.

“Then it’s safe to believe that she’ll be around for a while. Bad for you, but good for me to get a chance to kill her. They work by night, as you’ve noticed, so the best thing to do is get with you at the next sundown and track her. My fees are standard for each kill. However, if any other nasties show up, and you want me to handle them, then it’s extra.”

“Could she attract others?”

“Shikomes are pretty territorial, so no other paracreatures may live to attack while she’s there. When she’s gone, though, it may be something to watch for. We’ll cross that bridge when we get there.”

“Then I’ll come back tonight, at sundown, to take you to my home?”

“It’s a date,” she confirmed, standing. She thrust out a hand for me to shake, and I debated, for a moment if it would be safe to touch her. I wrestled my wolf under control and grasped her hand. Electricity streaked up my arm, making my wolf howl. There it was, the first step of the bond. I felt it to my toes. She was mine, without a doubt. She exhaled, and I knew she had felt it too, even if she may not have understood. I released her hand and left her office, needing time to collect my thoughts.

She was so damn beautiful. Everything about her, from the way she talked, to the curve of her neck, and her businesslike manner. I could read easily that she didn’t play games, but that slight grin of hers told me that she was deeper than that. That there was a woman, deep inside Red, that only she saw, behind closed doors, and I wanted to know her. I wanted to please her, take care of her, and never let her worry again. Suddenly my pack, which had always had my first allegiance, was shifted lower on the totem pole, and I knew, without a shadow of a doubt, that I’d decimate anything just for her. All from one conversation. Hell, from one fucking look.

Little Red riding hood with a twist. Instead of bears, we get shifters! Loved it.

OMG! I love fairy tales but this story was hot AND had a happy ending!