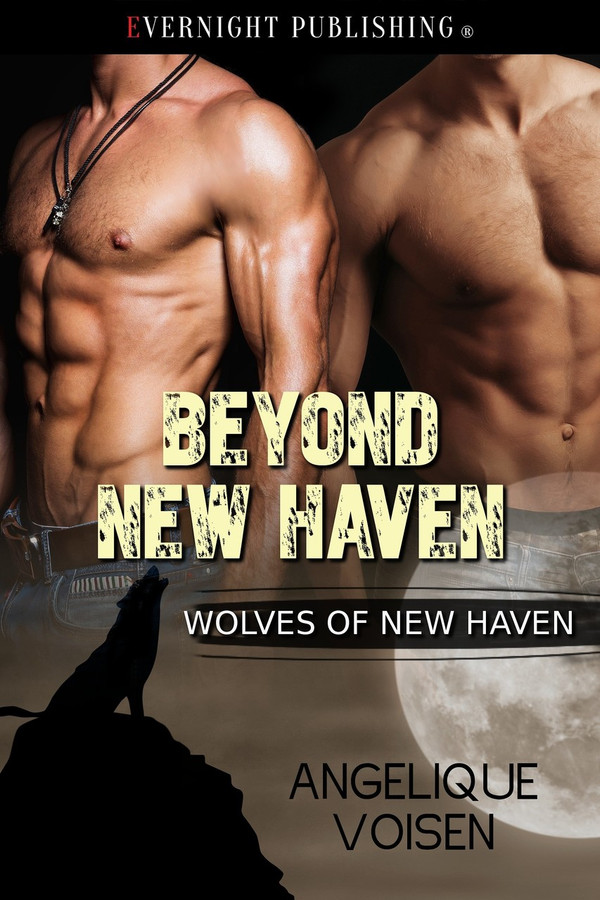 Dom Medina is in a rut. Left by his lover, Dom looks for meaningless fights, makes horrible pick-up lines, and his cholesterol levels are off the charts. When his cousin, the Alpha of the New Haven pack sets him up on a blind date, Dom decides to clean up and start doing some cardio. He’s dead-set on making Parker his, even if he has to fight a war on his own.

Omega wolf Parker is desperate. Rogue shifters have killed off his pack and taken over his town. When he reaches out to the powerful New Haven pack, he never expected the Alpha to send out his best man. Except Dom seems to think this is a date, not a job. Parker needs to focus on his vengeance, but Dom’s making it hard. The dominant wolf fights like a demon but is terrible at the dating game. Despite Dom’s flaws, Parker’s beginning to fall for the rough, but unexpectedly sweet dominant wolf. If he’s not careful, Dom might just end up owning both his body and his heart.

His mate didn’t prep his asshole immediately for entry. Sex wasn’t the only thing on Dom’s mind. Seduction and foreplay were on the menu too—something Parker hadn’t experienced much.

Most of his ex-lovers had only been interested in rutting a male Omega in the hopes Parker would get pregnant. Love was never in the cards.

Dom placed his hands on either side of Parker’s head, as if he wanted to make sure he didn’t crush Parker, and started to leave a trail of burning kisses down the line of Parker’s throat. Moving lower, Dom sucked the hollow of his collarbones, took Parker’s left nipple into his mouth and sucked hard.

Parker moaned, squirming, but Dom held him in place with his body. Feeling the slight edge of teeth, he tensed, but at the same time, he silently urged Dom to leave a mark on his body, to lay claim to what rightfully belonged to him.

“Please,” he whispered, unsure what he was begging for.

Dom knew though, and bit down hard enough to leave a perfect imprint of his teeth. Brief and fleeting pain followed. Dom worked up his entire body with his touches and kisses until Parker felt like he burned from the inside out.

Parker pleaded again. Dom scooted to the edge of the bed and hefted Parker’s legs over his shoulders.

“Fuck, you look so sexy, so needy and perfect for me,” Dom said, uncapping the lube.

Dom has come to New Haven seeking a place to regroup and hide away after his last painful break up. His cousin Carlos has taken pity on him but Dom’s latest night of drinking and fighting may end up being his last. Everything changes when Carlos sends him to Parker. Dom is finally ready for the date yet when he arrives to see Parker nothing is what Dom thought. Parker is trouble and not the good kind. Dom must make a choice; stay and help Parker and take another chance with his heart or leave and never try again. Can Dom take another hit or is Parker the one? Two shifters are looking for different things but discover that they want the same thing. Dom is a good man who has gone through some pain in his life and needs the things that Parker can give him but Parker is not looking for a date he is looking for help. Yet it seems that help comes in the package of a man named Dom. When the threat to Parker rears its head, Dom takes matters into his own hands. I enjoyed seeing Dom and Parker find their way. It was nice to see the two fight for each other and what could be. Parker may not be a big bad alpha but he more than ready to do what he can for those that are left of his pack and for the man he has grown to care for. Their story is fast paced adventure that pulled me in right from the start. I loved Dom and watching him come back from the dark place that he was to the wonderful place with Parker was a nice read. Love is always worth taking that chance and both men learn this lesson as they heal and learn to love again.

The &#039;Wolves of New Haven&#039; series has brought a lot of laughs, some definite awwws, and my respect for an author who took the werewolf lore and turned it upside down. Nowhere else have I read about werewolves with heart problems, diabetes, high cholesterol, obesity, and other regular human conditions. In fact, except for being able to turn into a wolf, none of these shifters are typical of the genre. They don&#039;t have super healing abilities, they aren&#039;t all drop-dead gorgeous, and they struggle with health problems, dieting, and exercise. All of which are very refreshing in a genre that likes to stick to the norms. Carlos, alpha of the New Haven pack and cousin to Dom, is very sneaky in his matchmaking. He knows Dom needs a purpose after his lover dumped him so Carlos convinces Dom to go on a blind date. Parker needs a champion, someone to handle Riker and his rogues after they decimated Parker&#039;s pack and took over his town ruling by fear. Parker reaches out to Carlos for help and Carlos says he&#039;s sending his best. Great set-up by Carlos! Dom is adorable. He comes across as this bumbling, accident prone, muscled, fighting dominant wolf with an absolute heart of gold. He really tries not to screw up but he just can&#039;t seem to help himself. Parker has had to learn how to be strong since his older brother, and alpha, was killed by Riker and, unfortunately, he tends to come across a little harsh for an omega. That&#039;s what made this installment so much fun. The pairings seen before held more true to the dominant and omega wolves, whereas here Dom is more sensitive and Parker is a little tougher. At least in the beginning.

*4,5 Loved it. Dom is just a grumpy cuddle bear who searchs his matching other half. But will Parker see through the thick rough armor and find Doms big heart of gold? This is an amazing series and I can&#039;t wait to read more...