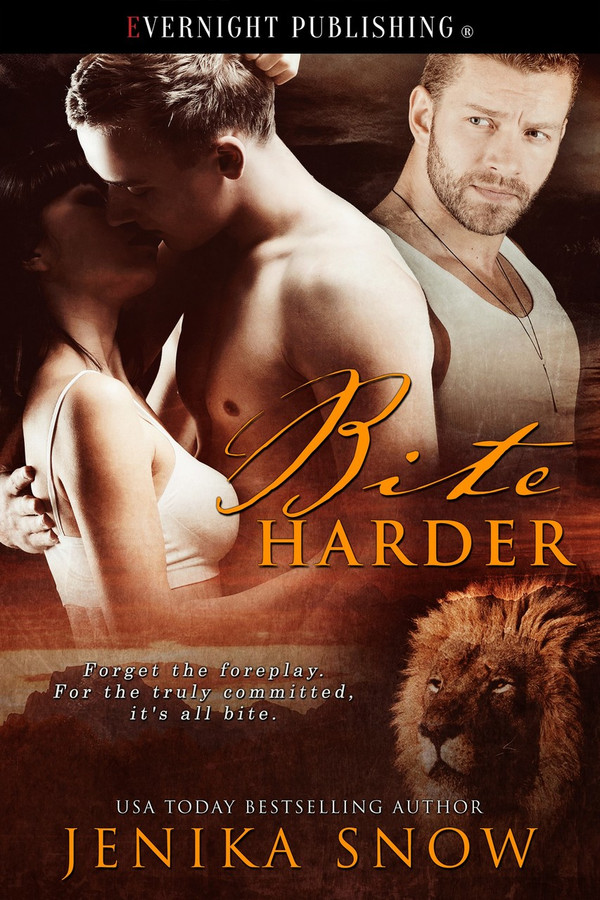 Forget the foreplay. For the truly committed, it's all bite.

Willow has loved Devon and Case for as long as she can remember, but as lion shifters they will eventually find their mates. When she allows herself to be with her two lions after a drunken party, she fears she's ruined a lifelong friendship and flees before morning.

Devon and Case have been inseparable since they could walk, but they can't tell anyone that they are mates. The pride of shifters they belong to won't accept a same-sex mating. But it’s not just their lives they have to worry about. They’ve also just realized they’ve become a triad with Willow—three shifters mated.

When a shocking revelation brings Willow's world crashing down, she knows she can't hide behind her fears any longer. Being with Case and Devon is the only thing that makes sense, and she doesn’t care if it ends up ruining their friendship.

She’d been drunk enough to pass out. But a part of her knew that there were no females here, and that the sounds coming from them were because they were … together. It was the middle of the night, and her desire was a constant burn inside of her as the seconds ticked by. As the moans continued, she became even more aroused at the sight and sound of what was going on in front of her. A part of her said to be ashamed by her desires, that these were her best friends. But she couldn’t help the lust that pounded in her.

Willow rolled over and covered her head with one of the decorative pillows. The fringe at the end covered her eyes, but no amount of fabric or cotton could drown out the moans she still heard. She gave up trying to cloak the noise out, sat up, and looked towards the door where the sound was coming from.

Willow played with the beadwork on the pillow as she stared into the darkness, her lioness eyesight giving her a perfect view of everything happening, as if the sun shone through instead of the moon. And then she found herself standing, walking over to the hallway, and bracing a hand on the wall. The door was so close that if she just reached out, she could have twisted the doorknob and pushed it open.

Dual-lighting from the moon and the streetlight came through the window. The smell of sweat and sex filled the room, covered her body in this thick, heavy sensation of pleasure, and her heart beat faster. Devon and Case were both on the bed together, the sheets on the floor, and their naked bodies on full display. They were kissing, pressing their hard, sweaty bodies together, and running their hands over each other.

Oh God, she was a voyeur intruding on this moment they shared.

3.5 out of 5 stars! Willow, Devin, and Case are all lion shifters who’ve been best friends ever since they were little. However, now that they just finished their senior year of high school everything is changing around them. They’ve always been close but over the past year Devin and Chase have found that they’re mates with one another and even though Willow has feelings for them, which they reciprocate, they are all scared about messing up their relationships. Will fate change for the better for them all or will their chances be taking away from them all by their closed-minded shifter community? This paranormal ménage romance surprised me with its unexpected twists while keeping my attention because of its sweet main characters. Even though it is a quick read, I was given enough background information that I felt really entertained, and it would be great still if I could read more about them. I found the relationship that Willow, Devin, and Case was really sweet yet intense in the way that they protected one another. I was really charmed because of their intensity as it helped me want to root for them no matter what got thrown their way. Though they weren’t sure what they all truly meant to one another for most of their novella it was how they care for each other that made me smile and what I appreciated the most. In addition, the epilogue wrapped up everything nicely too. I recommend this to those who are looking for an intense paranormal ménage romance to read and don’t mind that the characters are in the “New Adult” era of their lives. Review By: From Me to You ... Book Reviews -- read more of this review on my blog: frommetoyouvideophoto.blogspot.com --

What an absolutely great read!!! I just absolutely loved it and so would you! A definite must read!! Happy Reading!!!! :)