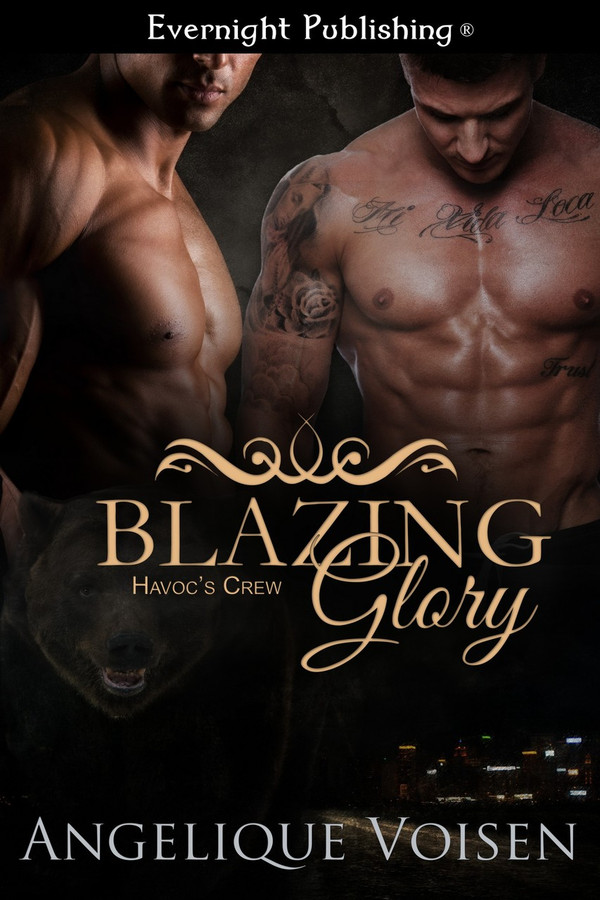 No one can hold a candle to Blaze. He's the only pyromancer in Havoc's Crew, and everyone knows Havoc’s Crew is the best magic outfit in Lyon city. When an accident leaves Blaze disfigured, all he wants to do is disappear. When a wave of zombies threaten the city it's up to him and bear-shifter Levi Black to clean the mess up, but the shifter seems more interested in him than the mission.

Blaze isn't the kind of man Levi would normally take on any of his runs, but he doesn't have a choice. The conceited pyromancer is supposedly the best, but the last thing he expects is a broken shell of man able to bring his protective animalistic instincts to the surface. Getting rid of the undead is the easy bit. The hard part is convincing Blaze he loves him even with his scars.

“Understand this, Blaze. I don’t like forcing the unwilling. If you want me to stop, I’ll stop and leave you the hell alone. If you want to die so badly, then I won’t get in your way.”

Levi’s words hurt in their simple honesty. Blaze swallowed. Before Levi Black came back into his life, all he’d wanted was to die. Reading the letter sent by the City Council and knowing he’d put more people in danger because of his mistake nearly drove him to the brink of suicide.

Blaze may have his pride, but the last thing he wanted was to involve more people in his mess.

“I want you in me, Levi.” It was a painful admission, but Levi was the only man who seemed genuine in his intentions. To Levi, Blaze wasn’t a novelty or a freak. He was simply a man Levi wanted, and it looked liked Levi wanted him badly.

“Good. I want you over that table.”

Blaze shuddered at the command in Levi’s voice. He didn’t resist as Levi laid him on his back over the dining table. There was a surprising gentleness to Levi, as if he was afraid Blaze would break under his hands.

Blaze craned his neck to see Levi cursing and clumsily fumbling through the pocket of his jeans. He smiled at the sight.

Catching him looking, Levi snarled, “Smirk all you want, pyromancer. You won’t be smirking once I start pounding into you.”

Gathering the remains of his dignity, Blaze asked, “You always carry spare lube around, bear?”

“Huh? Nah. Just for this occasion.” Levi returned, his form looming above Blaze. He skimmed his large callused hands over Blaze’s inner thigh, making him sigh. The gentle gesture was at odds with his personality, Blaze thought, groaning when Levi’s fingers curled around his steel-hard cock.

“I want you to know one thing before I fuck you, Blaze.” Levi’s eyes looked directly at him, making him shiver slightly. “I’ve spent months looking for you. Months of hell wondering if you were really alive.”

“Just so we can kill the Biter?” Blaze asked, quite aware of how ridiculous it was to have a conversation with his legs sprayed open lewdly like a whore. He began to close them, but Levi easily shoved himself between his legs, his hand pressed firmly against one calf.

“For a fucking wizard, you sure are dumb.”

“I hunted you down to claim you, asshole.” The intensity of Levi’s gaze and the cold, hard iron in his voice told Blaze the shifter was completely serious.

“As my mate. You’re mine, Blaze. You belong to me and I belong to you. Don’t tell me you haven’t felt anything.”

The denial on the tip of Blaze’s tongue faltered and died away. How could he lie to Levi, when Levi had been nothing but honest to him? How could he deny the mind-numbing and heart-racing desire that took hold of his body the moment Levi entered his threshold?

After the fire, didn’t something linger and whisper in his ear night after night? Didn’t he wonder why he continued on living, despite how much he told himself he wanted to die?

“Then claim me,” Blaze responded recklessly.

This was the first book by Angelique Voisen I have ever read and while there were some issues that I had with the story and the flow, overall it was a great story. The characters were interesting and the idea of these unique paranormals was actually fascinating. The ending left me needing the next book ASAP. In fact I would willingly beg because I need to know what happens. My only real criticism (as mentioned above) was that there seemed to be a rush to get to the finish line. The beginning was awesome and then there is a point where I was like oh no, what happened... and then the story seemed to right itself again and ended on what I consider to be a cliffhanger that I have to have a resolution to immediately.