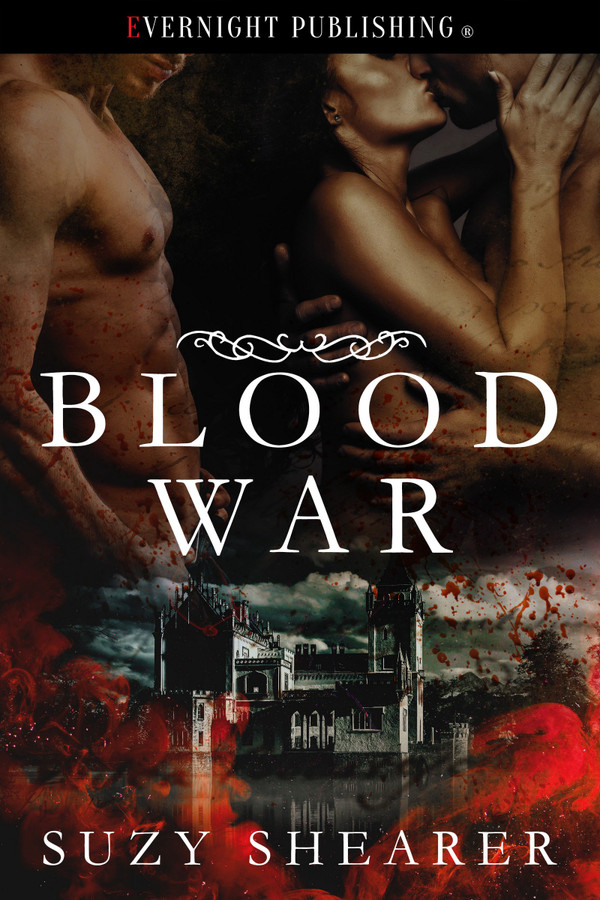 At 55, Ella Conlan thought her life was completely ordinary, maybe even a little dull, except for having RH-null blood. But she hadn't counted on being the center of a Blood War between two warring factions of vampires. Nor had she counted on being the mate of not one but two handsome vampires.

Jarek Hoggarth and his mate, Leon Fenton, are over the moon when they discover the woman with the rare blood group they've been searching for is their bond mate.

Now all they have to do is stop her from being killed, rescue her, convince her to donate her blood, and then finally get her to accept that she is destined to spend eternity with the two of them.

Schrö wandered in through the door cat-flap and sat at her feet, expecting a treat or at the very least a pat. Still distracted, she ignored him and literally boiled the water three times—all the while thinking of the words she thought she had heard. At last she managed to make the coffee and took it into the studio. Ella struggled to push the strange warning away from her thoughts as she began the mammoth task of filing and cleaning up.

The doorbell rang just after ten, and she handed over the work of many months—entrusting its care to the courier company, with warnings of dire consequences should anything happen. Maybe Ella could finally relax now that the piece was gone.

“I hope tonight I’ll get a proper night’s sleep.”

She spent the rest of the day cleaning up. Schrö spent the day trying to drag things out of the wastepaper basket or pull things off the table until at last he curled up and went to sleep amid a pile of discarded fabrics.

Around five fifty Ella made herself a stir-fry and fed Schrö. Then the two of them settled in the family room, Ella to read and Schrö to spend his time washing.

When the sun had descended to the horizon, Ella’s apprehension took over. Try as she might, she couldn’t ignore the warning she’d imagined this morning. Her stomach tied itself in knots, and her heart beat just a little faster.

As the sun completed its downward journey, Ella realized she’d read the same paragraph at least a dozen times. She put her book aside, got to her feet, and peeked out the window into the darkness. Every sound seemed magnified. Ella could hear Schrö’s soft snores, a dog down the street barking. Someone revved their car as they went around a corner, tires screeching. A few late birds heading back to their nests let out a squawk or two. Everything appeared perfectly normal.

She sighed, then sat down again. “This is so stupid. Nothing’s going to happen.”

Another few minutes of staring at the wall. Then Schrö sat up, ears going alert, fur beginning to rise. Ella turned her head this way and that, seeing nothing. She thought she heard faint voices coming from the backyard. Her heart beat a crazy tattoo. Ella tip-toed on shaky legs quietly through to the kitchen, peeked out the window, but once more saw nothing unusual.

Creeping back into the family room, she jumped and muffled a scream when someone knocked on the front door. Hand over her heart, she turned on the outside lights and took a deep breath. Only then did she open the door very carefully.

She certainly wasn’t expecting to see the very handsome, tall man. He looked to be around forty, with straight dark hair that fell past his shoulders. A strange, immediate attraction to him threw her off balance.

Despite herself, Ella felt a sudden rush of heat to her face. Her muscles twitchy and quivering, she tried to push aside her fright and said, “Yes?”

He just stared at her as if in total amazement, his brilliant brown eyes wide. She said hello a few more times, but he seemed to be in another world, never taking his gaze from her face.

Ella, meanwhile, had the sudden urge to kiss him. In fact, she’d have liked to do more than just kiss him.

I’d love to see what he has hidden in those pants! Wait. Where the hell had that come from?

Another man stood a few paces behind, scanning her front yard as if on guard. He was just as tall but had dark blond hair resting on his shoulders. He turned his head. On seeing her, his eyes widened.

Be still my heart. Oh my goodness, they are both so delicious. I want them both! She shook her head. What the fuck has gotten into me?

These two men were all she could focus on. She was tongue-tied. Somehow she needed to ignore her raging libido. Ella tried almost uselessly to push her X-rated thoughts away. Stop imagining kissing them while they’re both naked! She brushed her hand across her mouth, hoping she wasn’t drooling. Clearing her throat, she managed to speak again, despite imagines of bare chests, sexy lips, and other manly delights invading her mind.

The man in front of her seemed to come back to his senses.

From that moment on, her world dove headlong into madness. Nothing would ever be the same again.

Loved it! I always love books about vampires and this is no exception. Ms Shearer wrote a series with vampires but they were scary horrible ones. These vampires are so HOT! Wish it was me with the rare blood - I would love to have those two as mates. This was a quick read but very enjoyable. I always love Ms Shearer using older characters. This heroine is brave and older. I heartily recommend reading it

Suzy is fast becoming my favorite author. The fact her characters are always older and imperfect makes them believable . Blood War is different from her usual books but it is great. It&#039;s only a short story but filled with action and hot sex. It&#039;s a little different from the usual vampire stories in that the war is between vampires. I loved the heroine - she was so brave and who wouldn&#039;t loved having two handsome men!