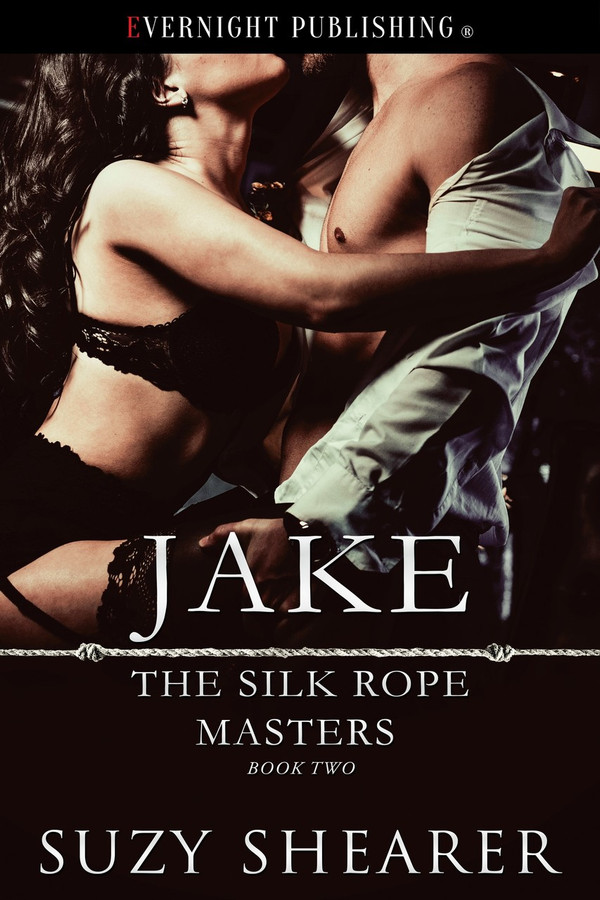 They ooze power, control, natural dominance—and sex. They are The Silk Rope Masters. None have ever found love, but watch out! When they fall, they'll fall fast and hard.

Jake Nichols, 53, is so tall that Emily Miller, 49, has to crane her neck to look into his face. He’s so muscular he could pick her up in one hand, and yet he holds her as if she were a fragile bird.

And that's exactly what she is, a beautiful plus-sized woman with a pain so deep she's buried all her emotions rather than face the tragedy that occurred just a few months ago.

Master Ash, the head of Silk Rope, assigns Jake to care for her, but Jake doesn’t expect to fall in love. Emily is only in his safekeeping until she can fly on her own, and then he will have to release her. But can he?

Opening her eyes, she took in the scene in front of her. A tall, shapely woman, a Domme. Her sub, naked, his wrists bound to hooks on the wall, was standing with his legs well apart, ankles fastened by a spreader bar. The Domme plied a flogger across his chest and then his thighs. As Emily watched, a flick across his testicles. He grunted. Another flick, this time the Domme wielded it upward and over his legs, catching his penis as well. His mouth opened in a silent scream as she landed a second on his cock.

Emily idly wondered what it must be like for a man to have his dick flogged, his balls whipped? Even from this distance Emily could see sweat on his face, the sheen of it glistening across his chest, as his Domme switched to a crop. A few gentle “love pats” on his nipples then thwack!

Between his legs again, and this time his scream rang around the area, but Emily noticed, if it was possible, his erection seemed even harder. A few more hits, then the Domme took his face between her thumb and fingers, and she kissed him. A savage kiss that had him begging for another when she stepped away. Instead of a kiss, she grasped his cock, twisting it, pulling at it until he pleaded for release. She shook her head.

His plaintive begging echoed as she hit him with the crop again, and he sagged against his restraints, disappointment radiating from him. She stepped next to him, her lips close to his ears. Emily strained to hear her words, leaning forward to catch them.

“You’ve taken your punishment like a good boy. I shall let you fuck me, but I haven’t decided yet if I shall permit you to come.”

Emily saw how the words affected him. His smile lit up his whole face as she undid the restraints. He fell to his knees, and taking her hands, he kissed them.

“Thank you, Mistress. Thank you.”

The Domme made him stand. Emily could see he was wobbly on his feet, his erection still hard and strong. The Domme didn’t give him a moment to recover, and instead she led him away after making him carry her bag of tricks.

I&#039;m so glad Ms Shearer is writing a BDSM series, I love the way she invests in all the members as well as the lead characters. This is the 2nd book in this new series and already I have my favourite members. In this book we follow Jake and Emily. They both are dealing with their past in different ways. Emily was written beautifully. A difficult subject to write about but it was handled thoughtfully and with care. Once more I was crying and laughing. I enjoy the way Ms Shearer can wring a gamut of emotions from her readers, it shows that we invest in her characters. Can&#039;t wait for the next book. Hoping it&#039;s Ash but then Finn or Iain or Kaden. Damn hope it comes soon.

I could not put this book down!! What an emotional journey for Emily (and the reader) since the tragic event in her life months before. She has kept her emotions deep inside and afraid to be herself or feel again since then. She is unwilling to give up BDSM because of the hurt though, even if it is to just sit and observe only. Master Jake has been asked to take her under his wing. Since she keeps everything inside, even Jake is at a loss of how to break down her barriers. When he does though, grab the Kleenex! Just when you think you have recovered from the breakthrough, get ready for more emotional upheaval. You will cry sad and happy tears all through this book. I also loved Jake’s friends and members of the club when they are on a mission! I can’t wait to read more in this series.

I laughed, I cried, I cursed. I wanted to slap the hero around the head but overall I just loved it. I&#039;m really enjoying reading about older couples, they seem more real. Ms Shearer has a way of making her characters so believable, easy to relate to. Part of the story was treated with delicacy and sensitivity, and I cried. A great read. I hope she has the next one well on the way because I don&#039;t want to wait.