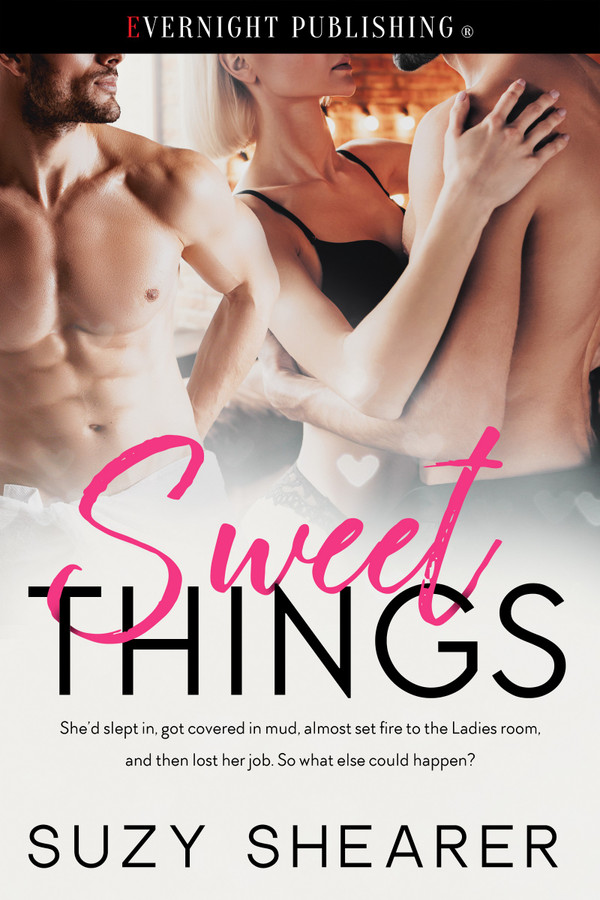 She’d slept in, got covered in mud, almost set fire to the ladies' room, and then lost her job. So what else could happen?

Mia Bruce, 54, couldn't believe how bad her day started out but that chain of events led to something amazing—she started her own business!

Karl Miller, 55, multi-millionaire, business owner and bisexual partner to Liam, couldn't believe his eyes when he found the half-naked staff member in the ladies' room. Instead of a fire in the bathroom, he found a fire in his heart.

Liam Kelly, 53, world-renowned artist, and Karl's life partner, meets Mia on the worst day of her life. He's smitten as much as Karl. Now all the two men have to do is convince Mia she needs two men in her life. Seems easy?

No. Not when she dislikes Karl at first sight.

To start with, somehow, she’d set the wrong button on her alarm and it woke her at four in the morning instead of seven. When Mia fell back to sleep after resetting it, she slept through three snooze buttons and ended up doing a mad dash to shower, dress, and then race for the bus.

Thinking the worst was over, she got off the bus alongside the large construction site opposite the huge office building where she worked for General Finance Corp. Unfortunately, it had rained heavily overnight and, as the bus pulled away, it drove through a large mud-filled puddle of run-off and soil from the dirty building site. One side of her dress from hip to hem, as well as her legs and shoes, were soaked with dirty brown water and soiled with large clumps of sticky brown mud.

Fuck! Can today get any worse?

“Probably,” she muttered while trying to brush off the worst of the mud. She thought about going back home but today was an important one at work so instead, after sighing, she climbed the steps to the front doors. A very dirty and angry Mia stomped into the office building then entered the elevator and jabbed the button for her floor. Two minutes to nine.

“Yay, made it on time,” she sneered, her voice full of sarcasm as she took the elevator to the thirtieth floor.

Today, the new regime began. The company had been sold to Tower Financials and rumors were rife there were going to be a lot of layoffs. Mia was the assistant to the big boss’s PA—a sort of PA’s A. The PA, Liz Chambers, dealt with the higher-ups while Mia dealt with the lower-downs. Liz’s office was in the breathtaking area with the bosses while hers was downstairs with the minions. Still, she liked the work and the company, having worked for them for the past fifteen years, and Liz was a great friend as well as her immediate supervisor.

Quickly throwing her bag into her bottom drawer when she was in her office, Mia surveyed the damage to her clothes. Damn. The mud and slush on one side stood out against the blue of her dress. Her legs hadn’t fared much better and her shoes were caked. She’d have to try to wash out the worst of the mud, especially knowing she’d have to face the new regime leaders. After making sure there was nothing urgent for her to deal with immediately, she raced into the ladies’ room. If she were quick, she should be able to clean up in fifteen minutes. The easiest thing to do would be to take the dress off, wash the muddy parts, and then dry it under the hand-dryer. And that was exactly what Mia did. Too bad if any of the girls came in. She needed the dress reasonably clean and dry.

Drying it was tricky, but apart from the hand-dryer overheating and smelling quite a bit, she managed to get the iris-blue dress dry. Now for her legs and shoes. Draping the now-dry dress over the paper towel dispenser, she washed her shoes and slipped them back on. Using dozens of sheets of wet paper, Mia began washing her legs. Bending over, her back to the door, dressed in just her shoes, red lacy panties, and matching bra, Mia heard the door open and groaned. Probably Tracy from the typing pool. She seemed to always be in the bathroom. There was a soft cough but she ignored her and finished washing her legs until she heard a much louder, deeper, cough. Looking around her legs without bothering to stand up, she got the shock of her life.

Casually leaning against the wall, arms folded and one leg crossed over the other with the toes balancing him, was a hunk. A fire extinguisher sat at his feet. She stood quickly and faced him.

“What the fuck do you think you’re doing in here? Get out!”

Sometimes fate throws us a curveball so that we can choose a new path in life. That is what happened with Mia. Being a PA&#039;s A wasn&#039;t what Mia really wanted to do with her life. A chance encounter with a puddle and a hand dryer brings her face to face with her future in more ways than one. Karl and Liam fell in love when their marriages failed. Friendship turned to love, however, a piece of their puzzle was missing. Then a sweet thing comes into their lives and everything falls into place....eventually.

Mia is done. Done with the day. Done with her bad luck and done with life. Its nothing but one bad luck moment after the next. Or is it? A serious of terrible events (funny because they’re totally relatable) leads Mia to her own business. It’s a brand-new start. A second chance. But that also leads her to Liam and Karl. They’re Millionaires, sexual partners and they want her to join them. When did her luck get so good? This sounded like such a fun story from the blurb. Light and romantic. Something to read before bed or a break at work. There is a lot more depth than I expected. I really like Mia. I understand her. She’s having those days that we all have. The kind that makes me want to sit in front of the tv with a pint of Haagen-Dazs and the phones turned off. Then she meets not one but two sexy men who want her. Unfortunately, they’re a pair because she only likes one. That is a great twist! I am not crazy about the plot of a millionaire falling in love and making it a menage. There is just a bit too many of those out there. It’s not believable for a contemporary. That said, I like the authors writing style. It’s down to earth and her characters are relatable. There’s some humor in here that had me smiling. There’s some sex in here that had me grinning. Sweet Things is a highly recommended read!

This was great, I loved it and was sorry when I finished it I needed to cry at times and laugh at others. I absolutely adore Aunt Mildred, wish I had her as my auntie. Those two hunks are wonderful, I fell in love with them both and Mia was perfect for them. The good thing about Miss Shearer is she always writes about mature people instead of twenty somethings.