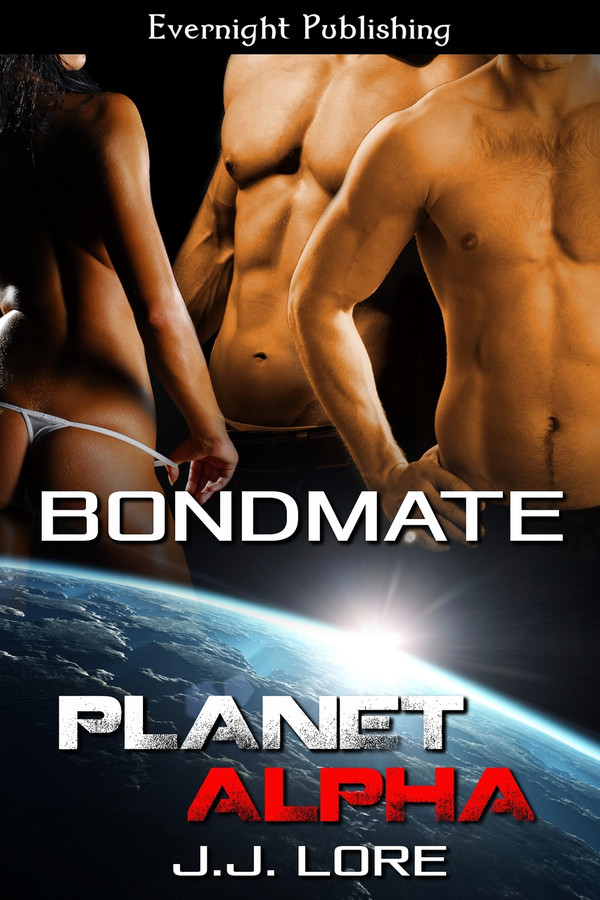 Decorated Alphan warriors Mateen and Bynton are on a clandestine mission to one of Earth’s refugee camps, in search of the one woman who might complete their bond. Tempering their instincts to capture and hold, both men realize they must court their chosen woman to win her trust.

Avanelle Rein is merely trying to survive in the chaos of a dying society. The last thing she expects is rescue at the hands of golden-skinned alien men. Despite her attraction to them, she fears their warrior ferocity.

Facing danger from Xyran raiders draws the three together as they explore their new relationship and one another. An unexpected challenge during an ancient claiming right forces Avanelle, Bynton, and Mateen to decide if their bond is strong enough to survive.

The light brightened, and she flinched as her eyes adjusted, jumping when she felt hands at her clothing. Adrenaline flooded her body, and she struck back, flailing at the assault even as she pushed with her feet to slide further away. Strong hands gripped her wrists and thighs, and she was pressed down on the soft surface. Two faces swam into focus, the big men, no longer enveloped in meters of fabric. They were wearing sleek leather tunics and pants, black as fear. Golden skin, golden eyes, square jaws and tight mouths, they resembled each other closely. Dark hair fell around their shoulders, and when they moved closer, she noticed glossy black curves among the strands. Horns. Devil horns growing from their skulls.

All the gruesome tales flooded her mind, and she screamed. Their grip on her eased, and she kicked against the bed until she fell off the side onto a carpeted floor. On hands and knees she struggled to escape, only to be captured by hard hands. They were the alien demons, come to capture her and eat her. Women had been disappearing from her community for years. Most had blamed perverted killers, but there had been whispers of these golden men with horns being in the area before some had vanished. She strained against their hold, her exhaustion forgotten as the basic urge to survive gave her a final burst of energy.

“Quiet. Calm.” The deep voice carried right into her brain, and she twisted her head to look at the villain who’d spoken. It was the one who hadn’t smiled, the one who’d stroked her buttocks like he was measuring her for a roasting pan. Unaccountably, she stilled, the tension in her limbs easing as she stared into his gleaming eyes.

“I am Mateen of the Albin. I’m not going to harm you.”

Another voice cut in, and she turned to see the other devil, a slight smile returning to his mouth. He’d been the one who spoke before. “And I’m Bynton of the Albin. I’m not going to hurt you either.”

She didn’t believe them, but wherever they were touching her felt only warm and solid, not painful. Big, solid chests hemmed her in; thick thighs pressed against her legs. A few shallow breaths calmed her a bit more. If they were going to eat her, she’d probably be in bloody chunks by now.

“What do you want with me?”

The men looked at each other and softened their hold on her enough that she could move a bit.

“We want to talk to you.” Mateen stared at her, his brows lowered.

“Learn about you.” Bynton released his hold on her arm long enough to adjust the way her cowl fit against her head. She swerved away from his touch, and he dropped his hand.

“Didn’t have to grab me to do that.” It was only bravado talking at this point. She knew her legs were going to shake soon and she’d fall. Too little to eat over the last few weeks, running and screaming, terror, had all stolen away whatever she’d been holding in reserve.

“We did. We needed privacy with you, and that wasn’t an option at the camp, was it?” Mateen’s voice was low, his reasoning logical. No, there was no privacy in the camp for anyone. She hadn’t had a moment of silence or peace since the soldiers had forced the evacuation of her apartment block in Puerta Santigo over a month ago, not that she’d had much solitude there. A blanket sectioning off half a tiny room hardly counted as a home. But she’d belonged there. Once she’d been evacuated her life had turned to hunger, filth, and desperation.

“Privacy for what? Are you going to kill me?”

Mateen narrowed his eyes, and she felt Bynton release her entirely as she asked her question.

“To eat me. The devils like to eat us, or so the stories go.”

“We aren’t devils.” Bynton took a step away and jammed his hands on his hips, throwing his broad chest and thick arms into perfect display. “We are decorated warriors of a respected house, not uncivilized cannibals.”

A great start for a new series.

This was the book that got me hooked. First book I read in this series and since then I have been reading whatever book came out except one - captive.

Great story (read twice) with great characters, premise and tons of action. Overall, enjoyable book with sexy, ferocious Alphan warriors even though it was very predictable at times. Highly recommended for a fast, light afternoon or evening read.

I enjoyed both this book and the following book Forbidden. Both stories worked and the relationships formed were interesting and the characters in each of the trios, formed strong bonds and their respect for each other grew, as trials tested their relationship. I enjoyed the style of writing and imagination. They were entertaining books.

Warriors at there finest.. for a job well done Mateen and Bynton get to travel to earth and find their potential mate. Bynton has a bit of ESP working for him, he is able to feel their mate.. or sense their mate. These two warriors as gruff as they are, quick to kill but just as quick to learn to care for their mate. When they catch Avanelle she has to remind them of a motley little thing, all dirty and has earth grime all over her. Avanelle is just what she looks like.. a product of her environment, earth more like a post apocalyptic time, where just the basics in life are non-existent. The Alphan Warriors has a proposition for their cute sassy little almost mate. Well I had started out with a mind set not to like this, mainly because of the price and the length of the book. Since then I’ve changed my mine..(not about the length or the price), but about liking the story. I adored Avanelle, and the story that Ms Lore wove... the warriors fit Avanelle to a T. It was a fun to read, I giggled and even said aw.. a few times. The sex scenes were good, fan your face worthy, since this is the first book, I may have to look into the second.. I liked the mix of caring, insecurity.. passion and even a dash of danger. Very nice job Ms Lore, and thank you for the chance to read your work.

I liked the story. It was a good alien story. Would have liked a little more heat, but it didn&#039;t make me like it any less.

Bondage, Planet Alpha, great, fast read. Hope to see more of the men of planet Alpha. This is the first book I have read by this author and will be exploring other titles by her.

It&#039;s short and sweet. The two aliens are ready, willing, and able to cherish their human, then fight to keep her. If you want a few hours read for lunch break that will leave you smiling because it&#039;s gushy, this is just right.

The author keeps readers on the edge with some twists and turns and the captivating characters and fascinating world tantalize readers and have them wanting to know more about Planet Alpha and its inhabitants and although I think it would have been better if it had been longer, the story is enjoyable and entertaining.

I really enjoyed this story. The only reason it didn&#039;t get five stars is the short length and price. But I liked the premise so I forked over the price anyway. I hope they (Authors) come up with more Alpha planet stories. Only three so far. Hopefully they decide to make the new ones longer. I definitely recommend this story. Enjoy!