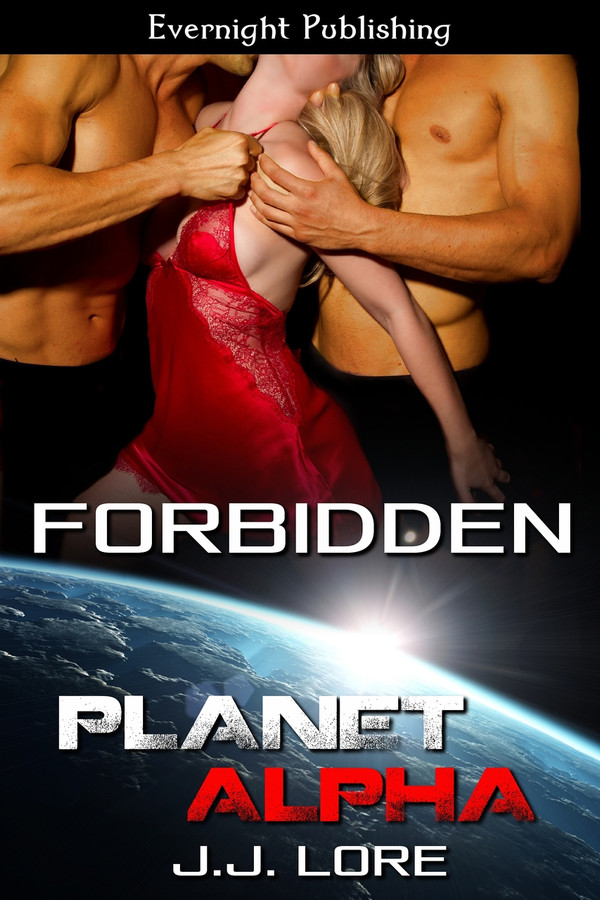 Working to heal wounded Alphan warriors is the new duty of bondmates Leo and Deklan. Although they have recovered from severe injuries received on the field of battle, they are no longer fit to fight. They have accepted this, but then their orderly, all-male existence is turned upside down when an injured human female becomes their new responsibility.

Aura Tremain wakes up in an alien hospital, healing from a beating delivered by the scaly Xyrans who’d kidnapped her. Upon her discharge, two handsome Alphan men offer her refuge until she’s well enough to travel.

Even though Leo and Deklan know they will never be permitted to bond with Aura as their souls demand, they can’t ignore the desire she stirs in them. Her time with them is short, but so intense. Will the intimacies they share be strong enough to withstand the expectation that bondmates are for battle-worthy warriors? Can their passion bind the three of them forever?

They glanced at each other, and she realized she had no idea which was which. When one reached out to touch her hand, the moment he touched her skin she knew it was Deklan. So the other was Leontus.

“We’re Alphans,” Leontus said as he reached into her lap to retrieve the greyish oval that had been attached to her face. His knuckles bumped her upper thighs, and her skin quivered.

So these were the fierce warriors people had been talking about in the last few months. If she believed the whispered gossip and intermittent and hysterical news reports, she was sitting in the presence of the beings who could save humanity if only they would open their borders and give the billions suffering on Earth another few planets to ruin. She was too insignificant a player in galactic events to have much of an opinion, other than that these two men seemed quite civilized and didn’t fill her with revulsion like the Xyrans had. She would have shrugged, but the warm thing pulsating against her shoulder held her back.

Tearing her gaze from the two imposing males in front of her, she took in her surroundings. They were in a small room, about four meters square. The furnishings consisted of a bed, a wide chair, and a black cabinet. Very utilitarian. Not especially alien. “Where am I? Why am I here?”

“You’re here to recover. Gain your strength before you are returned to Earth.” Leontus approached the bed and stood close to her, his gleaming eyes inspecting her face, or her injury, rather. His hand curled near her cheek, and he hesitated a moment, then lightly traced his thumb across the spot where the alien—the Xyran, had struck her. His eyes darkened, and some shiver of awareness flew along her nerves. She knew she should be scared, terrified, but instead simply waited for the next word, the next touch. Her belly fluttered with nervous energy. “How does this feel?”

As Leontus asked the question, Deklan reached out and removed the device from her shoulder. The loss of its weight combined with the strange sensation of having her arm back under control made her shiver. Without a word, Deklan was pulling at the shirt she was wearing, baring her upper arm and collarbone to their view. She made a half-hearted attempt to cover herself, but their big, strong hands were undeterred as they stroked gently over her skin. She remembered the blank agony that had struck her dumb when the Xyran hit her, but none of that pain remained, only a vaguely tingling numbness, like she’d slept in a funny position all night.

They were only making a clinical inspection, but Aura was embarrassed to find her body heating up, pulses timed with her accelerating heartbeat throbbing between her legs with every brush of their fingers against her skin. A dark part of her brain wanted them to tear the rest of her borrowed clothes away, check her thoroughly for any bruise or cut, prod at her until they declared her fit and she was wet and satisfied. Both of them touching, kissing… She blew out a huff to clear her mind of that bizarre desire. Why was she thinking about that? Why was the idea of being naked in front of them making her breathe hard, making her nipples tighten? The Alphans drew back.

She shook her head. What she was experiencing was far from pain. No, better to keep those thoughts to herself. These courteous males would likely be revolted that some alien woman found them attractive. Insistently attractive. She must have sustained a head injury to be this mixed up.

“Good. I’ll schedule a visit from the physician in the morning. He can give you any details about your injuries you desire.”

Leo nodded once and looked to Deklan, who asked her to extend her arm, raise it up, circle it. She did do with a few flickers of pain, but no major impediments.

“Very good range of motion. We’ll evaluate further tomorrow. Now you should try to sleep.” He handed her the glass of water from before, and she swallowed it down, hoping the cold liquid would calm the rush of sensations in her body, not to mention the unwarranted sexual longing in her brain.

This was a sweet alien romance with no mistrust or games. It was straight forward and got to the point. I did enjoy this quick read

I loved Forbidden. I love the Alphans. Deklan is so sweet and open and Leo so reserved, and compassionate. Aura is a the perfect women for them. Strong, knows what she wants and is unwilling to settle for anything less. I love how J J Lore gives an epilogue on how the characters are doing. I loved the ending.

By the standards of their society, Leontus and his bondmate, Deklan, are no longer worthy warriors. They are old and unfit for combat due to their old wounds. They are forbidden to claim a woman to complete their bond. When they would never have thought it possible, they are given a marvelous gift. Aura’s life on Earth wasn’t great. And that was before she was kidnapped and then beaten by a disgusting alien slaver. Death would be a blessing. Instead, she is gifted with something better. I love the non-perfection of these heroes. Sometimes the hero is too perfect. Not this time. Leo and Deklan are brave, kind and damaged in both body and spirit. Aura may appear delicate and fragile but she is most definitely strong and she deserves to be happy. We should all be so lucky. My favorite part of the story was the end and I won’t say why. I don’t want to spoil it for you. I’ll just say Aura is one exceedingly fortunate woman. I suggest you spend an afternoon with Aura and her men. You won’t be sorry.

I had to read this right after Planet Alpha , Bondmate because I enjoyed that story so much. This story is equally as good. Loved the heroine and her story. Loved the gentle, brave and sexy Alphan warriors who take care of her. A fascinating take on the plight of retired soldiers in an alien culture. Hot sex, a love story, and a great ending. Can&#039;t wait for this author to write another.

This erotic science-fiction novella gives an entertaining and spicy look at one aspect of alien-human interactions. There are glimpses of an elaborate and regimented society that evidently suffers from a sad deficit of females to bond with as well as an ongoing war but it would be nice to get a more in-depth understanding of the society as well as the backgrounds of the featured bondmates. This somewhat sobering look at a sadly depleted Earth is sprinkled with wonderfully spicy interludes but could use a bit more substance, but perhaps part of the problem is that I have not read the other volumes in the series since it is possible that some of the previous tales have gone into more detail. Nonetheless, it’s a fun light read and it would be interesting to read more about this universe. “Forbidden” is part of the ‘Planet Alpha’ series and centers on human Aura Tremain, who is kidnapped by the alien Xyran species but fortuitously rescued by a group of Alphan males and cared for by bondmates Leo and Deklan. Leo and Deklan have their own issues making them wary of the attraction that springs up between Aura and them, but all three discover that their differences don’t matter as much as their similarities. The problem is determining whether they are worthy of pursuing the relationship.

I loved Forbidden. I love the Alphans. Deklan is so sweet and open and Leo so reserved, and compassionate. Aura is a the perfect women for them. Strong, knows what she wants and is unwilling to settle for anything less. I love how J J Lore gives an epilogue on how the characters are doing. I loved the ending.

I seem to like this series, although I did not read the one with the male on male romance. Otherwise every book that was written under this series has been a good. Looking forward to more!

Two wounded warriors take in a female from Earth while she is recovering from injuries sustained during her kidnapping and begin to want something that according to their laws they are not worthy of…a bonding with the female in this riveting sci-fi romance. This is the second book in this series by multiple authors that I have read and it is fascinating and entertaining although I do wish the stories were a little longer. J J Lore is the author of this one and Bondmate, the other one that I read and I must say that I enjoyed both of them.

This is the third Planet Alpha book I&#039;ve read. I liked the action in Broken and Damaged better, but this is a good love story. All the alien fighting comes very early when the heroine is injured through an act of stupidity/bravery, however you view her attacking a huge scaly enraged monster bent on raping a child. The rest of this short book explores the relationship between the Earth woman and her Alphan caretakers, scarred ex-warriors who their society says don&#039;t deserve a woman. Really?? We don&#039;t learn much about Alpha, though, so it&#039;s difficult to understand this line of reasoning. In fact, there is little plot except for the ménage sex and conflicting emotions about breaking the taboo to bond. The path to a HEA seemed obvious, so it was no surprise but still satisfying to read when they achieved it.

I had to read this right after Planet Alpha , Bondmate because I enjoyed that story so much. This story is equally as good. Loved the heroine and her story. Loved the gentle, brave and sexy Alphan warriors who take care of her. A fascinating take on the plight of retired soldiers in an alien culture. Hot sex, a love story, and a great ending. Can&#039;t wait for this author to write another.