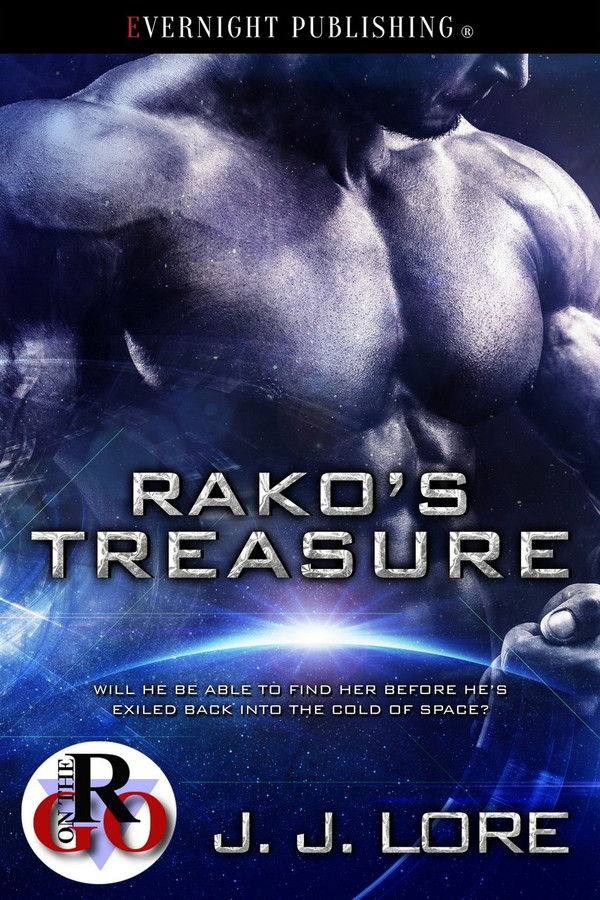 Banished from his planet, Rako wanders the edges of known space looking for salvage, longing to find his mate. When he spots a weak signal from an ancient crash, he isn’t sure if the scavenge is worth the time and fuel. But in the smuggler’s hold on board, he finds a stasis pod with a beautiful woman inside and loses his heart.

Alyce was kidnapped by villains over a century ago, so when she’s awakened by a formidable male of a race she’s never seen before, it takes some adjustment.

Doing the right thing, Rako takes Alyce to a habited station, where she can begin to rebuild her interrupted life. But when descendants of the beings who originally captured her attack, Rako’s protective instincts emerge, along with the extreme body morphing of his kind. He wins the fight, but misplaces Alyce in the process. Will he be able to find her before he’s exiled back into the cold of space?

Am I still merchandise? Afraid to ask, confused by everything, Alyce froze, waiting for Rako to return and lead her to whatever came next. This lassitude wasn’t like her, she knew, despite the huge gaps in her memory. She knew she should be fighting, questioning, asserting for her own self-preservation, but all she could think about was getting warm and eating something.

“Here, come to the cleansing unit.” Rako gestured at a clearish door in the wall and she stumbled toward it, steadying once he circled his arm around her. “I sense you need that first.”

First? Everything provoked a question and uncertainty, so Alyce decided not to wonder too much. It would be best to attend to the basics first. The hatch slid open and she stepped into a chilly cubicle, lined with vents and circular depressions. Rako crowded in behind her and she didn’t mind at all. Without a word, he stripped off his clothes and stuffed them in a bin in the wall. For a shocked second, she stared at his looming body, but then turned away, desperate for modesty. Even though her memory was faulty at the moment, she was sure she’d never seen such a broad and well-muscled chest. It had taken every bit of her battered will to not follow the trail of fine hair down to what would surely be a masculine distraction. A pulse of arousal shuddered through her nerves, even though that should be the last thing on her mind.

He plucked at the edges of the loose shift she was wearing and for a second she thought to resist, but had no energy for it. Up went the stiff, rough cloth off her body, and he tossed it into a corner. She heard him sigh deeply. She looked down, dreading what she might see, but her own underwear was in place if pulled askew. No wonder if she’d been frozen for over a century. Down they went, and she didn’t know if it was her or Rako who kicked them away.

Warm steam filled the air and she sucked in the dampness, her skin and throat soaking up moisture. A rough cloth stroked across her back and she braced herself against the slippery wall as Rako efficiently soaped and rinsed her arms, shoulders, and waist. Before she could consider if she should cover herself somehow, he was quickly rubbing her legs, circling around her thighs and knees, rubbing her feet, and she just allowed it. It was bliss to feel the water sluicing her skin, to balance and be free of that tube. Any concern she might have regarding concealing herself washed away with the suds.

Then he briskly dealt with her buttocks and she had to stop herself from leaning forward, so he could wash between her legs. The soapy water dripped there regardless, and she could hardly ask him to use the cloth too. She could hear Rako’s breathing echo in the chamber and the sound brought her out of her reverie. His hard fingers splayed against her waist as he pressed for her to turn. He would see even more of her body if she did, but why did she care? He’d been kind and gentle and undoubtedly didn’t find her species attractive. Though she couldn’t say the same for herself. That one glimpse of his muscle-packed body and the thick cock swinging above a bulging scrotum was enough to wake up her dormant pussy.

Careful of the slick floor, she turned, keeping her eyes averted. Rako paused and then went to work on her belly, between her breasts, and her neck. As the sweet-smelling cleanser he’d applied to her skin dripped down, he gathered her hair up, forcing her to meet his gaze. Rako’s irises were dark and tiny beads of water glittered on his thick eyelashes. His skin, which seemed to have a plush texture, was darkened by the water and she wanted to touch it, to gauge its consistency. A wild thought and she decided to attribute it to post-waking mental instability. She deliberately looked no farther south than his wide shoulders.

“This must be very strange for you. Are you frightened?”

“I should be.” Alyce considered her state of mind, something every empath had to practice regularly. “Especially since I can’t read your emotions.”

“Ah, you’re an empath. A perilous gift,” Rako said, an assessing tone in his voice. “What do you feel?”

His gentle massage of her scalp was incredibly relaxing, and she almost yawned. Strange, considering she’d slept for decades. “Confused. Lost. Safe.”

The last word just fell past her lips and she considered it a strange choice. There was absolutely no reason to feel secure in her situation, especially since she had no idea what this powerful man was thinking, but there was no denying that she did. Rako nodded and rinsed her hair. Clumps of bubbles slid along her arms and down her legs. “You are safe. Trust in that.”

“Why am I letting you do this to me?”

Rako made a huffing rumbling noise that made her breath catch momentarily. “You need washing and don’t know how to operate this module. And I’m good at it.”

A tendril of her former confidence worked free of her relaxed state. “You seem pretty sure of that.”

“Would you be leaning against me if I wasn’t?”

Alien meets mate. Alien loses mate. Alien gets mate. A time-honored formula that just doesn&#039;t get old. When interstellar salvage hunter Rako encounters a crashed ship in a deserted sector, the spoils within had better be worth his trouble. But inside the ancient wreck is a treasure he never intended to find--a cryogenically preserved sleeping beauty that awakens his species&#039; mating call. Protocol requires that Alyce be taken to the nearest government installation to claim refugee status, but the hulky scavenger isn&#039;t willing to give her up that easily, especially when the descendants of her kidnappers turn up to reclaim their prize. Rako&#039;s a skin-turner, a shape-changing alien considered an &#039;undesirable&#039; in commercial circles. Alyce is a humanoid empath, stolen from her people more than a century earlier. They&#039;re strangely drawn to each other, and the ways this unlikely pair get acquainted during a long space flight is touching, sexy, and hilarious all at the same time. Alien, schmalien; when it comes to love they are fully compatible in every way that counts! ​ This story has a bit of a slow start, with a lot of detail about Rako&#039;s tools and instruments that this reader could do without. The interesting characters, especially Rako&#039;s diminutive and long-suffering servant/sidekick Boz --&quot;Your copulatory vocalizations were quite unusual!&quot;-- quickly liven things up. Rako&#039;s blithe description of government, &quot;Elected representatives from all races, excessive data collection, high taxes, corruption, spotty public safety, the usual thing,&quot; was a golden moment of witty dialogue (my favorite)! Alyce is a sweet, independent heroine who isn&#039;t afraid of anything, making the best of a bad situation and taking things in stride. Though I would have liked the story to be a bit longer, Rakos Treasure is a quick, classic Beauty and the beast style story that&#039;s always a treasure to read, no matter which part of the universe you find it in.