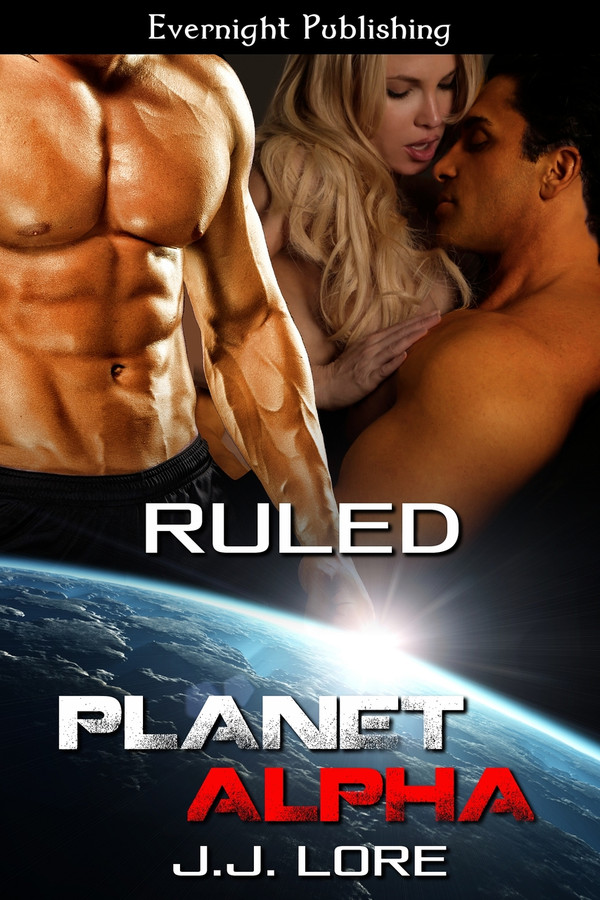 While on a clandestine visit to Earth, Prince Edem of Alpha and his bondmate Mallet by chance meet a humble cook who intrigues them. The impulsive prince feels a brief fling with an exotic human female would be the perfect way to conclude their travels, but his more pragmatic bondmate urges caution.

Despite all the reasons to avoid her, the Alphans seek her out, intrigued by her prickly pride and defiant disposition. For her part, Corrine is intimidated by these imposing and mysterious alien men, but finds herself overwhelmed by their determined courtship.

Edem and Mallet convince themselves their deepening feelings for Corrine do not have to include bonding, since such a commitment would be forbidden by the King and rejected by the subjects of Alpha, determined to keep the royal bloodline pure. But when danger threatens, the three are forced to choose between having the galaxy at their feet and having each other forever.

Heat and light. And noise. That’s what she remembered before being borne to the floor in the Alphan’s strong arms. He was crouched over her now, one of his big hands pressing her face into his shoulder as the sound of shouts and scuffles roiled around her. Shock and fear made her skin go cold, and she burrowed as close as she could to Edem, heedless if it was improper. His warm weight was such a comfort, one she didn’t want to lose.

“All will be well,” he whispered in her ear, and she pressed her cheek to his. His long hair slipped over her face as his scent, spicy and musky like cardamom, filled her nose. Her breasts pressed to his chest, and as he shifted his legs over hers, her nipples hardened and sent a trickle of heat down to her pussy. Suppressing her instinct to spread her legs wide and press her groin to his, she instead wrapped her hands around his shoulders. “You will be safe with us.”

She desperately wished to believe this. She hadn’t felt safe in so long, she couldn’t even remember the last time she’d been completely at ease. She couldn’t stop the little whimper that escaped her, and Edem responded by rumbling something soft and low in that musical-sounding language to her. The raised voices gradually lessened along with the noise of stomping feet. The tension that had tightened her muscles eased, and she loosened her grip on his back.

His breath gusted across her neck, and she quivered. As his hand cupped around the back of her head to shield her from the floor, he shifted so he was looking down at her, his golden eyes a molten bronze as he took her in. She was frozen to the spot. He said something else in that unknown language, and she heard a few people move, but all consideration of her surroundings vanished as he pressed his lips to her cheek then nudged nearer her mouth.

“What…” She didn’t complete the question because the answer was obvious. This alien wanted to kiss her, and therefore that was what he was doing. He was arrogant, and he did as he liked. His lips were so warm and soft the idea they weren’t yet on her mouth made her moan a little. In response to her wordless little cry, Edem kissed her quiet, his mouth dropping over hers in a melting pressure that made her tense and relax at the same time. He nibbled at her upper lip and teased her lower with his tongue until she opened to him, heedless of the violence occurring outside or the idea that the other might Alphans be watching. Long, blissful seconds of pleasurable friction followed as she learned what he liked. He rocked his hips against her in a gentle imitation of penetration, and she could feel his thick cock against her belly through all the layers of clothing separating them. Why was she responding so positively? She didn’t even like sex all that much.

“Edem.” Mal’s voice made her shiver with awareness, and she broke the kiss to look at the big man as he squatted next to them, one big hand on his bondmate’s shoulder. Edem shifted his legs and rolled to the side but still kept his arm around her shoulders. She knew reclining between them on the floor probably looked ridiculous, but it didn’t seem anyone else was even in the room at this point. How long had they been kissing?

“I’m glad you are both well and not distressed by the recent disturbance.”

Was that a glint of humor in the imperious man’s eye? She tried to collect her wits, but Edem’s solid proximity and Mal’s open inspection of their entwined bodies made her brain fuzzy. How long had he been watching them? The idea should have been repellant, but she experienced only curiosity. She should be trying to get up and see the aftermath of the explosion as she normally would have, should be leaving the embrace of this near stranger. She shouldn’t have been kissing an alien on the dining room floor. Mal picked up her hand and inspected it as Edem smoothed back some of her hair, and an unaccustomed lassitude filled her.

“Corrine, come back with us.”

I love this series. Each book has been awesome and I can&#039;t wait for the next one.

Super hot book, not everyone can write a good menage but J.J. Lore sure can.

This book was extremely good. Great story line, and wonderful people in it. I would really recommend this book to most everyone. As long as people whom read these books are open-minded you will love the story.

I worried from the synopsis that the heroes would be a bit too arrogant or pigheaded, but they are very likable. Characters aren&#039;t cardboard or one dimensional. It is, of course, rather short, so the plot is bit limited, and I do wish we saw a chapter adapting to their new lives, rather than just the epilogue that takes place several months later. Still, all in all, a very good addition to the series, with the most impressive dialogue. Jj Lore is a talented writer, and it was a treat to a book in this genre with actual prose. This was my first book by her, but I will definitely look into her other books

Ruled is the 10th book in the Planet Alpha Series and every book gets better, hotter and more intense! The males of Planet Alpha are in desperate need of mates as their females are getting fewer due to very low birth rates. They have discovered that human women are a compatible species. Alphans mate in triads, they have their bondmates another male who they bond with at a very early age then if they’re lucky enough they’ll find their third. Prince Edem and his bondmate Mallet are on a clandestine visit to earth when they meet Corrine Idesa, a cook at the embassy who intrigues them. Because the prince is quite impulsive and used to getting his own way he decides a fling with a human woman will conclude their trip perfectly. As the prince of Alpha Edem knows he is expected to mate with an Alphan female. Edem makes up a cultural exchange program so that he can take Corrine back to Alpha with them. It’s while they’re on their spaceship on their way back to Alpha that Edem gets carried away and bites Corinne and bonds with her. Mal is not happy to say the least, but because he hasn’t bonded as well he gets very sick and the choice is taken out of his hands. Back on Planet Alpha they get a rude awakening in that they’re being exiled because the council has voted, they won’t accept a human queen and as the bond can’t be broken they have to leave. They end up on Tarquin, one of the furthest planets under Alpha’s control. Unexpectedly they all thrive there with the other society rejects and are in the process of building a thriving community. I sincerely hope that there will be more books containing people from Tarquin or who choose to live there. I would recommend this book to all Planet Alpha, m/m and ménage romance story lovers.

I received this book for free in exchange for an honest review. This does not affect my opinion of the book or the content of my review. I have read several books in the Planet Alpha series and with each one I fall just a little bit more in love with the Alphan men. After reading the 10th and newest installment, Ruled by J.J. Lore, I am even more convinced that I need these aliens to be real and invade my home. In Ruled, we are once again treated to the hot and sexy Alphan males and their desire to find the perfect bondmate. Alphans bond as trios, two men and one woman, and their bond is unbreakable. Yet the path to true love is never an easy one. In this one we have the added political intrigue of one of the men being the Prince and heir apparent of the Alphan monarchy. I have read multiple books in this series and I must confess that my favorite ones are the ones written by Ms. Lore. Her writing is so tight and flows so naturally that I easily find myself lost in the pages. The characters are relatable and likeable and you can’t help but hope they find the happiness and love they seek. The emotions are authentic and help me understand the characters’ motivations. The plot is always fascinating and drama filled. And let’s not forget about those steamy sex scenes. Ms. Lore created characters that were complex, yet they made sense. Whether it was Edem’s impulsivity, Mal’s protective nature, or Corrine’s insecurities, I found something that I could relate to and believe. The relationships, whether it was the men’s or theirs with Corrine, was so heartfelt and emotional that I couldn’t help but smile while I was reading. I truly hope that the Planet Alpha series never ends. Each one has been just plain fun to read and I love having a go to series for those times when I need to just escape. Hopefully, Ms. Lore has many more Alphan men who need to find their female bondmate.

Another great book in the series, waiting for the next one!!!!! Where will it happen and who will write it??????

I really enjoyed this new addition to the Planet Alpha series. The characters were interesting and believable, and the plot was well thought out. I liked the emotional overtones of the two men&#039;s relationship and the cautious acceptance of the heroine. Overall, I think this was a great book and recommend it to anyone who likes Sci-fi romances.