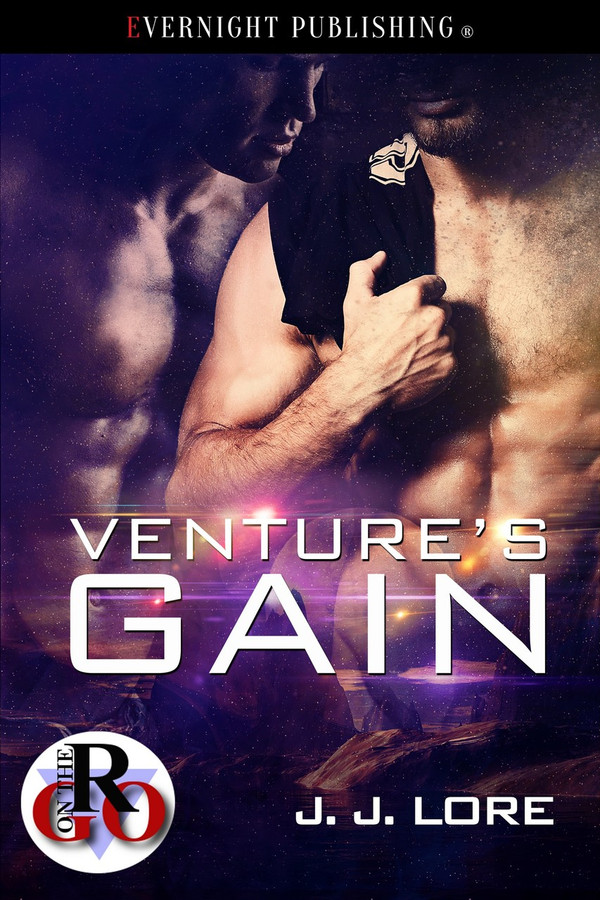 Star tussle player Cai travels the galaxy with his team playing intense matches, but is too introverted to have much of a social game. At a mixer before the next day’s match, he meets a man who is capable of drawing him out of his shell, and he lets his guard down, hoping for a connection.

Stalking his target in a crowded bar seems like a good idea to Venture, at least until the conversation he’s sharing with the handsome athlete turns personal. But he has a job to do, and no matter how much he likes Cai, Venture still has to knock him out, tie him up, and hide him away until payment from gamblers hoping to influence the outcome of the contest comes through.

The dynamic between captor and captive shifts and evolves even in the short time Cai and Venture spend together. Despite the binds holding Cai, he longs to touch Venture, and it doesn’t take much encouragement for Venture to let down his guard with his attractive prisoner. Who is the jailor now?

Venture carefully tucked Cai’s softening cock away and straightened his trousers. “You went away for a moment.”

“You mean escaped from your clutches?” It should have sounded bitter. In fact, for Cai’s own sense of self, it would be better if it was meant to provoke, but instead, all the emotion he could work up was amusement.

“You promised not to,” Venture parried with a glint in his eyes. He rose slowly and looked down, and Cai couldn’t help but notice that Venture was sporting a prominent erection, obvious despite the loose fabric of his garment.

“Are you in command again?” Cai’s mouth was dry, and he wasn’t sure if they were still playing the game.

“I think you expended most of your energy just now, so I’ll just take over.”

Yes, they were still playing, judging by the tiny dent of humor at the corner of Venture’s full lips. Lips that framed a mouth which had just given him incredible pleasure. A wave of warmth filled Cai as his body remembered.

“I should just tighten your bonds again since you’ve gotten all the relief you need.”

“But what about your needs?” Cai dared to glance at Venture’s groin. That was overt as he was able to be.

Venture narrowed his eyes and shuffled closer. “All I need is your mouth for that.”

A little thrill of uncertainty rolled through Cai, and he hesitated. He thought they were flirting, but maybe Venture was serious. And would that be such a bad thing, to be immobilized while Venture did whatever he liked? It was a dark thought, and something he’d never considered before, but the past hours had been teaching him a lot about himself.

Very deliberately, Cai pushed his arms back, lacing his fingers together behind his back. Venture’s eyes sparkled, and a knowing grin curved his lips. “That’s right. You hold still. No sudden moves.”

Slowly, Venture unfastened his robe, pushing aside the dark material and carefully freeing his cock. Cai studied it, noting its heft and dimensions were similar to his own. Evenly matched, so he would have to perform at least as well as Venture had done for him.

Venture reached down and rested his fingertips under Cai’s chin, tilting his head slightly up, then urging his mouth to open. Cai waited motionlessly, then almost laughed when Venture glanced down at his shaft, looked at Cai’s spread lips, and then nudged his mouth open even more. Saliva gathered along his tongue as he anticipated.

Trailing his fingers along Cai’s cheek, Venture caught his gaze as he leaned forward to barely rest the tip of his cock on Cai’s lower lip. Waiting for the thrust, the invasion, Cai sucked in a breath, but nothing happened other than that he could faintly taste the sharp musk of Venture’s skin.

“Tell me you want it,” Venture whispered, and Cai believed he could hear need in his voice. Not just the need for sexual contact, but an urge for Cai to be aroused, and to genuinely desire this, separate from the reason they’d even encountered each other. Like they had simply just met at that bar, liked each other, and stolen away to share this pleasure.

“I do.” Cai followed up on his words by leaning forward, taking in as much of Venture’s cock as he could, stretching his jaw, using his tongue. Venture hissed and Cai paused, worried he’d pinched or sucked too hard, but the other man merely nodded his head and closed his eyes.

Mind games and the dynamic between a kidnapper and his victim are at the center of this story, with surprising results. It is too short to get into any serious psychological analysis or a mention of the proper disclaimers when dealing with a situation of such unevenly distributed power, instead it provides a look at what might be possible. It features two strong-minded men with very different backgrounds and personalities and speculates about the outcome. Cai is an up-and-coming tussle player (a science-fiction version of what sounds like a more brutal version of football or rugby to me), so he is used to physically standing his ground. Socially he is much less secure, essentially because he does not have the time or energy to go out and party or find a partner. So when he is confronted with an experienced kidnapper who is also dangerously attractive. Cai is totally out of his depth. Venture makes excellent money by kidnapping people and either demanding a ransom or, in this case, preventing them from doing something his backers do not want to happen. He is a kidnapper with principles though, such as no harm coming to his victims. Venture is shocked when he finds himself questioning his resolve once Cai is tied up and at his mercy and discovering how much fun they can still have despite the restrictions is a surprise. If you like stories with surprising outcomes, if you want to see two men deal with unusual circumstances leading to unexpected results, and if you’re looking for a read that presents an unconventional look at a kidnapper and his victim, then you might like this short story. As disturbing as it is on the one hand, the characters pulled it off for me.