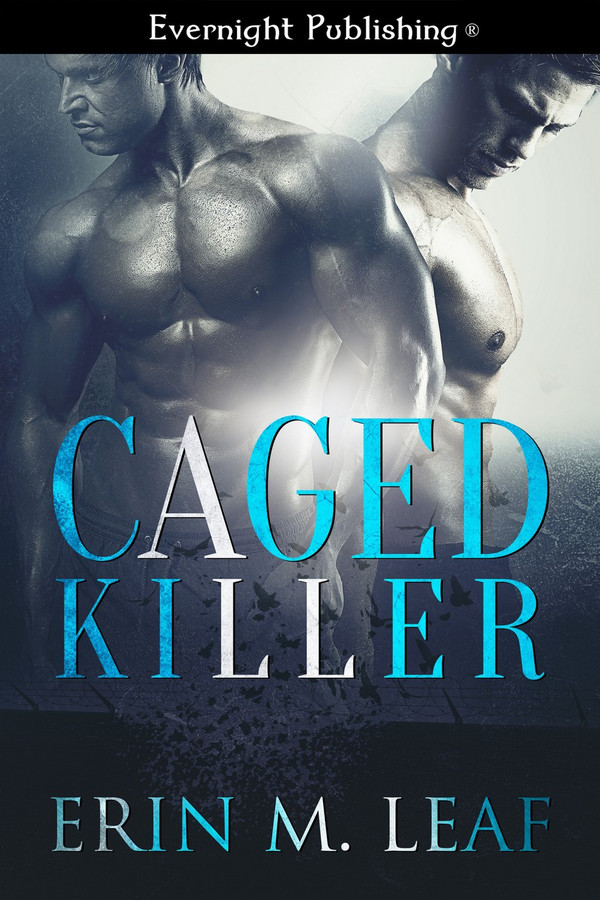 Knox is a killer hired to catch a thief, but what happens when the thief catches the assassin instead, and chains him up? Nothing good. Nothing … sane.

Knox Calvin has spent his life repressing his sexuality. When Mick Lannon picks at his carefully constructed mental cage with a knife, he isn’t prepared for the fallout. Unfortunately, Knox isn’t the kind of man who can be bound for long, and Mick has his own demons to wrestle into submission. When Mick’s vendetta against his aunt’s killer spirals into all out war, Knox escapes to watch the carnage from a distance.

Mick likes his sex casual, his partners breathing, and doesn’t much care about anything else. Knox wasn’t interested in sex at all until Mick shackled him to a wall. What happens when one moment’s slip into darkness wakes up the monster in both men?

“Oh, Jesus Christ.” The words fell out of Knox’s mouth before he could stop them. Mick’s weight pressed right onto his dick, hard and painful and fucking perfect.

Mick licked his lips. “Well, well. Clearly you didn’t see that coming.” He shimmied down a bit more, slotting Knox’s erection right between his legs. The fucker looked like he was getting off on this shit.

“Fuck you.” Knox refused to let his hips buck up into the bastard’s heat. He was not gay. He wasn’t anything at all. He wanted to twist Lannon around and crack his spine into pieces, but he didn’t have the leverage. Not anymore. Not with the bastard on top of me, but the moment he moves…

“That can definitely be arranged.”

Mick ground down, sliding his knife up Knox’s arm like a deadly snake. “I like blood.” He pressed in with the tip, just enough to sting. Blood trickled down Knox’s arm, circling the tattoo inked into the crook of his elbow.

“What the hell are you doing?” Knox couldn’t seem to stop running off at the mouth. “What did you dose me with?” There had to be some reason his body was so hot to trot right now, after years of indifference to pretty much anything or anyone. Drugs were a likely culprit.

“Whatever you pumped into my veins is doing this.” Knox bit back a groan. The scent of chocolate swept over him. “Fucking get off me.”

Mick licked up his arm, ignoring his pleas. “You are an unexpected treasure, Knox Calvin.”

Knox pressed his lips together so tightly the skin went numb. “You’re a fucking cocksucker.”

Mick sat back up again, pushing Knox’s erection flat. It hurt like hell. “Sometimes, yeah.” He licked his lips. “And obviously,” he punctuated his words with a roll of his hips. “So are you.”

Knox growled, beyond pissed and heading straight into rage. “Motherfucker.”

“Mmm. Look at you.” Mick’s eyes traveled along Knox’s torso. “You had no idea you could feel this way, did you?” The thief grinned. “Oh, I’m going to enjoy this.”

“Fuck you.” Knox felt like there wasn’t enough air going into his lungs. Fucking drugs.

“You’re repeating yourself.” Mick slid his knife into the opening of Knox’s t-shirt, and with a swift, sure jerk, split the fabric right down the middle. “Well, would you look at that?” He put his palm dead center on Knox’s chest. The heat from his hand burned. “You have a picture of a cage inked into your skin, Mr. Calvin.”

That’s it. He’s fucking close enough. Knox twisted, lifting up and using his legs to trap Mick. Using his chains as leverage, he tenses his shoulders and flipped them both over, pinning the bastard underneath his body. The mattress squeaked like an old whore, but he ignored it, trusting the steel bedframe to keep them off the floor. He shoved an arm over Mick throat, metal rattling.

“Where’s the key?” Knox shifted the chains, digging the shackle’s cuff into Mick’s shoulder. I should just kill him and get it over with, he thought, but he didn’t press harder. Something about this guy made him want to let the situation play out. What would the thief do next? And it’s not like I have anything else to do right now.

Mick narrowed his eyes. “I have a knife at your jugular, Knox.” He leaned the tip into Knox’s skin.

“I don’t fucking care.” Knox pressed harder. The sting at his neck felt like hardly anything.

“The feeling’s mutual. This is business.” Knox frowned. “Give me the key.”

The blade at his throat sank in unexpectedly. This time the pain wasn’t small. Wasn’t good. Warmth blossomed over his shoulder, wet and strange. Knox blinked, trying to think, and then Mick flipped them back over. He threw his blade to the side and slapped a hand over Knox’s throat. “You stupid fuck.”

Vaguely, Knox realized that his hard-on had finally subsided.

Leaf’s imagery is gripping. Almost dream like. A story with little morsels dropped all along the way just waiting for the mind to squeal and slam on the brakes, yelling &quot;Holy shit&quot;, at an awesome revelation. ‘Caged Killer’ is thrilling from start to finish!

I really did like this, although it was a guilty pleasure sort of liking. Knox and Mick were fun characters and it was great to see how their relationship started, so to speak. However, I would have preferred to have had a little more lead up, a bit more buildup before it was twu wuv and living together and an HEA. The thing is, it works, mostly. These two are that kind of weird (a thief and an assassin) where either there needs to be 200 pages of explanation or you just roll with the punches and kick disbelief into the next galaxy. This book does let you do that; the pacing is fast, the steam almost rises off the pages, and those two together are like oil and fire -- the story would just have been so much better if it were longer.

Erotically mind blowing and dark, Ms. Leaf seduces me again with her sexually charged m/m erotica. For those looking for a happily ever after or some sweet loving, leave now. This tale is for those who enjoy a bit of the dark side with some of my favourite edgeplays: blood, knife and breathplay. This story starts at a slow sensual simmer and quickly heats up to a blazing hot kinky blaze. If Ms. Leaf would have thrown in some fire play, I would have melted into an overcharged sexual puddle. This tale isn&#039;t about kink. It isn&#039;t about sex either. What Ms. Leaf does is weave a story of suspense with kinky seduction. When men seek vengeance, it can become a bloody war, especially when they are doling out justice for a loved one killed. Mick is the kind of man who has nothing to lose. Because of this, he takes things to the edge and to all outsiders, he is uncontrolled. In reality, Mick is tightly controlled chaos and fury. I love this about him. When he pulls in Knox who can&#039;t resist the kind of dangerous play Mick excels in, it is explosive. The chemistry between Knox and Mick is almost physically palpable. It is like watching two caged tigers fighting for dominance. The underlying erotic power struggle between these two men just make the book all that much hotter for me. This story may be short in length, but it packs a lot in and is rich with character, plot and sex. Highly recommended to m/m readers who enjoy a dark erotic read with two sexy men succumbing to their mutual attraction. Where&#039;s the next book with these two characters? - See more at: http://glbt.theromancereviews.com/viewbooksreview.php?bookid=22335#sthash.8j5boRvW.dpuf

Knox Calvin is an independent assassin who has taken a target who proves more than up to the task of evading him. What Knox can’t work out is how notorious thief, Mick Lannon always seems to know exactly where he is when he’s following him! In the end Knox decides he’s had enough and calls his broker and tells him he’s out. It’s no big deal because he doesn’t do torture deals, Knox just kills them. Just as Knox is leaving his brokers place he gets drugged and kidnapped. Mick Lannon wants to know why Knox Calvin is after him so he kidnaps him as he’s leaving an apartment building. When he realises he’s disrupting Tony DiLorenzo’s drug empire to the extent that one of Tony’s lackeys wants him out of the way. One of Tony’s dealers was driving around high as a kite one night when he ran down Mick’s aunt and killed her. Now, they all have to pay! Mick has Knox chained up to the wall in his spare room, yes, he has chains above the bed in his spare room. Mick has an unhealthy obsession with knives and blood-play, none more so than when he’s having sex and Mick likes to have lots of casual sex. Knox isn’t that interested in sex in fact he’s never been that interested in sex with either men or women until he wakes up chained to Mick Lannon’s bed. Knox has a hard time coming to terms with the fact that his body is actually getting turned on by the fact that Mick is not only holding a knife to his throat but he’s cutting him. Only thing is Knox pushes a bit too hard and forces Mick knife to penetrate his throat a deeper than Mick wanted! This is when Knox meets Micks younger sister Aileen. Aileen now lives with Mick because their only other living relative was their aunt who was ran over and killed. Even though Mick only has Knox captive for a day a lot happens within that day! Knox realises he gets incredibly turned on by knife-play and actually wants and enjoys sex when it’s involved. Mick realises that playing with Knox calms him down and centers him like no-one else. Alas, Knox escapes but he can’t stop thinking about Mick. Six months later and Knox is still following Mick but this time he wants to help take down Tony. When Aileen is kidnapped by Tony all bets are off and things get very interesting. Caged Killer is all about two very different but fundamentally the same men who fall in love with other not in spite of their personal kinks but because of them! I’ve read a lot of Erin’s books and I must say this would have to be my favorite so far! Caged Killer isn’t a light and fluffy love story it’s a dark, twisted road to love so deep and abiding you will wish you’re the one on the receiving end!

Knox is an assassin hired to catch Mick but this thief turns the tables and captures Knox. This is different and fun and dark. I really love the way the author thought out of the box with this plot. Both Knox and Mick are great characters. They each have their own demons and I like how it all plays out. The sex is good, I like dabbling in the dangerous. Caged Killer is a highly recommended read!

After trailing Mick unsuccessfully, Knox gets the tables turned and is captured. After waking up chained to a bed, Knox is confused about his feelings. He&#039;s never been with a man, let alone a man that gets off on knife and blood play. The two are virtually enemies, but they are inexplicably drawn to each other. The story flowed nicely and even though this is a dark romance, it wasn&#039;t too dark. This is my first book with knife and blood play, but I will be reading more in the future! Even though this was a short story, it didn&#039;t feel like it, and there&#039;s an epilogue!