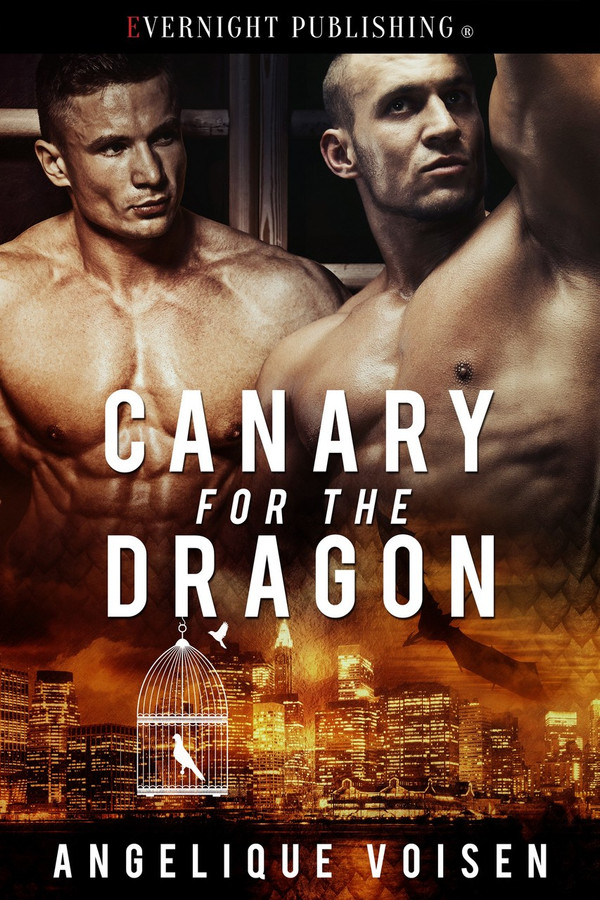 Sky’s a canary prince that’s been kept in a gilded cage all his life. As a breeder for his dying people, it’s his job to find a suitable mate and continue the bloodline. All he wants to experience is a one-night-stand with a stranger he’s attracted to, before someone puts a permanent lock on his cage.

Rex’s a century-old Alpha dragon shifter trying to make it past each day. Losing his mate tore his soul in half. As a result, his dragon’s broken beyond repair. When Rex meets Sky, he realizes he’s been given a second chance at love. But things are never that simple.

Sky’s powerful avian family wants their breeder back and Sky’s terrified for Rex. Little does Sky know who the real threat is. When a dragon finds his mate, the hunt never ends until the Alpha claims his mate.

Sky shivered. Goosebumps appeared on the surface of his skin, but Sky’s dick bulged against his opened jeans. He fumbled for his bottoms, eager to take them off. Rex strode forward, assisted him in yanking them down, along with his boxers. Cool air caressed his lower half.

“Look at you, little canary. So sexy and eager for me, hmm?” Rex stroked his inner thigh in small circles, making him shudder.

He silently wished Rex to move on to his dick, start pumping his shaft again.

Sky recalled he still had his shirt on, so he pulled that off.

“I like lovers with initiative,” Rex murmured, looking him up and down. Sky felt utterly exposed, vulnerable, and liked every second of it. It seemed appropriate he bare it all for Rex, body, heart and soul—even if Rex didn’t know it.

“You’ve had plenty of lovers then?” Sky bit his lip a second later, recalling Rex lost his mate. “I’m sorry. That was uncalled for.”

Rex shook his head. “It’s fine. You’re scared. You use sarcasm and humor to hide it.”

“This is my first time. I mean…” Sky paused, blushing hard. “I’m scared I’ll disappoint you.”

And he wanted to please Rex so much, Rex wouldn’t forget him easily.

God. He sounded like a brat, but being a virgin, he didn’t know what it was like, being at the complete mercy of another man but Rex was one in a million. Rex was worthy of his gift.

Rex blinked, some of the intensity in his gaze melting. “You’re a virgin?”

“Is that a problem?” Sky demanded, not wanting Rex to back off now. Taking a breath, he rose to his feet and said the words that came from his heart. “I want my first to be you, Rex.”

“First and last,” Rex whispered against his ear, sending a flutter through his heart.

“What does that mean?” Sky asked, his question left unanswered when Rex locked lips with his.

Sky is looking for safety and love. Could Rex be the man to give him that? Can a canary find a way to save a dragon? Rex lives in his own prison, one of his own making. His daily trips to listen to a beautiful bird’s song gives him a little peace in his life. When fate has the two crossing paths Rex can do nothing but step in to save Sky but in the end it just might be two men saving each other. Will love win in the end? Can Rex and Sky be what each other needs? I really enjoyed Sky and Rex’s story. The author does a wonderful job of bringing these men to life and filling them full of depth. Each man has his own pain to deal with and maybe even try to overcome. Alone they only survive but together they fight. Sky is a small shifter but he is ready to stand up for himself and others of his kind. Rex is mighty and when he wants something there is no stopping him. The two make a wonderful pair and I loved seeing them fight for their love. Each one believes the other deserves better and the two must make some hard choices if they want to find their happy ever after. Love is a special thing and it should always be fought for. Rex and Sky learn this lesson the hard way. Their story is a fast-paced adventure that shows us the power of true love and what it can do. I enjoyed my trip to this world and cannot wait to return for more.

I liked the trapped heroes in “Canary for the Dragon”. Sky was trapped by life and Rex was trapped in his memories. That is until he met Sky. The story flowed well. I enjoyed the meeting of the two and the romance. Plus readers get a bad guy who is trying to ruin the mating. Pairing a Canary with a Dragon was a first for me. Angelique Voisen is a good writer. I&#039;ve read many books by her and have enjoyed each book. “Canary for the Dragon” is a book I’ll add to my shelf for re-reading. I encourage other paranormal readers to buy this book for the great storytelling and unique pairing.

A century after the Paranormal Peace Treaty, shifters live out in the open and, more or less, at peace with humans. It’s the differences between various shifter species that are more difficult to deal with, as well as some shifter societies’ positively medieval ideas of how things should be run. With a canary shifter trapped in a gilded cage, destined for an arranged marriage and a life of service to an eagle shifter he despises, and a dragon shifter who lost his human mate twenty years earlier and has imprisoned himself in a life of rigid routine as he runs his business, this story was bound to be interesting. Add potential mpreg to the mix, as hinted in the blurb, and I was a goner before I even started reading. Sky is a lowly canary shifter, a breeder, and at the bottom of the avian shifter hierarchy. He is engaged to an arrogant eagle shifter who believes the world should do his bidding, and all so Sky’s family can gain some social standing and a continuation of their line through a “power marriage”. Sky thinks of escaping his fate every day, but he lacks the courage – both on his own account and because it will damage his family’s reputation. The guy he is engaged to is an abusive a**hole who is full of himself and convinced everyone is there to do his bidding. Sky hates him but sees no way out of his dilemma. Rex is broken from losing his mate, and even though he is a powerful alpha dragon shifter, grief has reduced his strength to the point that his dragon is beginning its descent into madness. When he hears Sky sing, something begins to change inside him and while he has no idea what he is getting himself into – interfering in avian shifter affairs – he is a dragon, and there will be no peace until he has what he wants – his canary mate! Both men have a lot in common: they are shifters who can fly, they think they are restricted by someone or something in their life, and they both believe in true love… never mind that neither of them has it right now. But they are also very different – complementing each other just about perfectly. Once they admit that, deal with Gareth and his family as well as the Paranormal Council, they can get down to figuring out how to live together. What a journey! If you like shifter stories which read more like fairy tales, if you enjoy a strong knight in shining armor (who is actually a dragon) rescuing a courageous, stubborn submissive shifter in need of help, and if you’re looking for an entertaining, super-hot read that has what I think is the right balance between adventure, world building, and romance, then you will probably like this novella as much as I do. It made me smile for sure and is going straight to the reread folder.