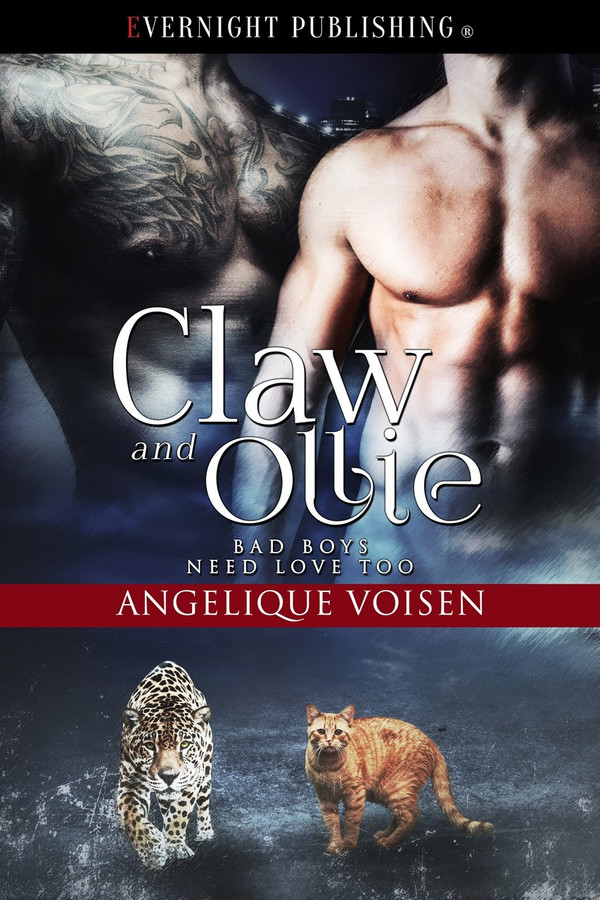 Can a broken cat find redemption?

Tabby shifter Ollie can charm his way into any safe and into the pants of any eligible bachelor…once upon a time. Now Ollie’s merely a shadow of his former self, terrified of facing the outside world. Ollie craves seclusion, until his heart starts longing for a mate to make him whole again.

One glimpse is all it takes for jaguar shifter Claw to know Ollie’s the one man he’s been searching for his entire life. Knowing Ollie needs time to heal, Claw’s kept his distance. When an enemy from Ollie’s past resurfaces, it's up to Claw to get his hands dirty. Claw doesn't mind, as long as he gets his reward in the end. Ollie will become his, no matter what happens.

Ollie let out a squeak as Claw planted his palm against Ollie’s chest. Ollie’s heart started on a staccato rhythm, making him smile. “Hear that? Your heart knows it already belongs to me.”

Claw trailed his fingers lower, his touch light as a butterfly’s wings, but when he reached the bulge in Ollie’s jeans, he gave it a squeeze. Ollie widened his eyes.

“See? Your body knows who it belongs to as well.” Claw undid the button of Ollie’s bottoms, unzipping them to free Ollie’s cock. It was long, beautiful, and starting to thicken. He swiped his thumb over the leaking pre-cum, making Ollie moan.

“Tell me to stop,” Claw said, beginning to move his hand up and down. Ollie’s shaft felt warm under his touch, the skin over the ridges and bumps velvet soft compared to his hard, callused fingers.

“I don’t want to,” Ollie murmured. “Kiss me. Please? I always wanted to find out.”

Excellent answer. Too bad Claw wanted Ollie to pant a little for him. Using one fingernail, he dragged it down the tip of Ollie’s leaking slit, further down Ollie’s sensitive cockhead.

Then he tipped Ollie’s chin and gave the little pussycat the kiss Ollie had begged for. Using his tongue, Claw speared Ollie’s mouth open. Kissed Ollie with teeth and biting, unleashed all his pent-up sexual frustration. Ollie responded, leaning in closer, placing his trembling hands around Claw’s waist to eliminate whatever distance was left between them.

Claw could feel Ollie’s naked dick pressing up his stomach. He deepened the kiss. Ollie grew bolder and slipped his fingers under Claw’s shirt, feeling his muscles, ink, and scars. Curious little cat seemed intent to explore every inch of him, too—not that Claw minded.

“I tasted you and me combined,” Ollie said with wonder.

“Like it?” Claw couldn’t help but ask. Ollie had his shirt halfway up now and rested his smaller hands over the old rake marks across his ribs.