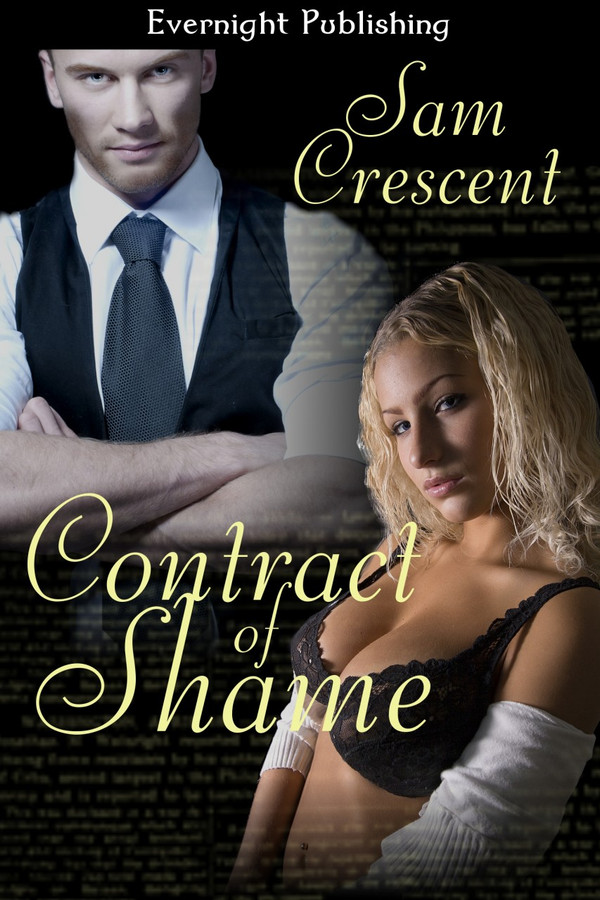 Richard Shaw doesn’t believe in love. He does believe in getting what he wants, and Scarlet Hughes is next on his list. In his world, there is nothing he can’t have. All he needs to do is find her weakness.

Scarlet is a single mother trying to make ends meet. A nightmare from her past keeps her cut off from men and relationships, but a steaming kiss one afternoon in the office leads to her shame.

For one week, Scarlet will give Richard her body and in return he’ll give her the means of giving her son a good future.

But when her past comes back to haunt her, Scarlet can’t hide from her fear any longer, and Richard must risk everything to claim what is rightfully his.

Will Scarlet find it in her heart to forgive him?

“You used your money and power over me to get me to do what you want,” she said.

“No matter how I got you, you’re still here, and I wouldn’t be anywhere else.” His words baffled her, and he silenced her with a kiss.  She melted under his touch. His hands cupped her face and tilted her head back to give him better access. Scarlet moaned and wound her hands behind his neck. The shirt he wore created a rough touch against her pointed nipples.
As a hand moved back to grasp her neck, she gasped and opened her mouth. He plunged in, touching her tongue with his.
He tasted of warm whisky and masculinity. Richard swamped her in size and shape. She didn’t know who broke the kiss first. He moved down her face to her neck, nibbling along her exposed collarbone. Her eyes shut, and she moaned as he bit down. Her neck and ears were ultra sensitive.
Her nipples pointed out against the negligee. She took a breath as he eased a strap down off one of her shoulders.
“Open your eyes,” he said.
Scarlet opened her eyes and stared into his smoky depths. He didn’t look at what he was doing but continued to gaze into her eyes. The strap went down her arm slowly, and then he removed the other until the negligee pooled at her waist. Her breasts were exposed to the cool air. Still he didn’t look. His hand cupped one. Scarlet broke their gazes and stared down at where he touched her. His thumb stoked along the tip of one sensitive but firm and erect bud.
“They’re so big and full,” he said. Seconds later he buried his head against her chest. His tongue glided over the tip he had aroused with his fingers.
Scarlet was shocked as she stared down at her boss’s head and became even more aroused at seeing him tongue her.
****
She had fucking gorgeous tits, and he wanted to suck on them all night long. The large, red nipples filled his mouth. She truly was a full woman. The indent at her waist looked so tiny against the full, rounded hips. The red highlighted her figure perfectly, and he applauded his taste in clothes.
Never before had he picked out clothes for a woman, but with Scarlet he wanted to go that extra mile. He didn’t want faceless people dressing his woman. Richard wanted to see her in clothes he knew she’d look stunning in. Her complexion and figure really worked in the deep red.
When she walked out of the bedroom, his cock had sprung to full attention. Even now the tip was soaked in his pre-cum, his trousers unbearably tight. He wanted his clothes off and Scarlet on the floor with her legs wide open, so he could fuck her sweet cunt.
Richard couldn’t do it. He wanted the first time to be exquisite torture and to last as long as possible, to draw out the pleasure until they were both begging for release.
She stood before him waiting for his next command. Didn’t she know what to do? He didn’t care. He didn’t want to think about her other partners.
The thought of her other lovers had him fisting a hand in her hair and slamming his lips down on hers. He would wipe out any and all memories of her other men. The only person who counted was him.
By the end of this week he’d have her begging him to keep her.
Other Books in the UNLIKELY LOVE series:
Blackmailed by the Beast
Contract of Shame
Claiming His Wife
Seducing Her Beast

I enjoyed this second story in the Unlikely Love series. I did find Richard’s behavior somewhat shocking after seeing his attitude concerning Wayne and his methods for securing Lily. But I guess it was a “do as I say, not as I do” situation when it comes to his desires. Overall an entertaining read. A businessman to the core, Richard Shaw doesn’t believe anything will happen unless it’s written up in a contract. As he’s madly in lust with his assistant, he finds her weakness and exploits it by presenting her with a contract she can’t refuse. How romantic is that? Scarlet Hughes would do anything for her son. And her boss points out how far she will really go when he offers her financial assistance with her sick son. A week of intimacy seems a small price to pay for security and she’s been burned by romance before. Sign her up, or rather sign on the dotted line. What could go wrong? While some may find Richard cold and controlling, which he is to a degree, he just needs the right woman to change his outlook. And Scarlet is that woman. He doesn’t know it but he’s been wooing her right along, just not showing her. When he gets her alone he takes her breath away and she’s not prepared for the feelings he brings up. Can they have a future when the contract states a week?

CONTRACT OF SHAME by Sam Crescent is an erotic romance that is a great combination of sweet and hot. This is book 2 in the Unlikely Loves series. You could read this one as a stand-alone, but you will appreciate the characters more if you have read the first book. I prefer to read a series in order whenever possible, so I bought the first book, Blackmailed by the Beast, and I was glad that I did read them in order. Scarlet Hughes is a single mom with a four-year-old son. She is struggling to make ends meet and to provide her son with the medical care he needs. Her boss, Richard Shaw, has been a good man to work for this past year, until he suddenly calls her into his office one day and makes her an offer that turns her whole world upside down. I highly recommend this book and give it 4 out of 5 stars. It&#039;s very well written and the story hooked me right from the start. There&#039;s a lot of great passion and heat, but also tender romance, and even a touch of mystery. I have become a fan of Sam Crescent&#039;s books and CONTRACT OF SHAME was my favorite so far. Ms Crescent always creates characters that I care about and pulls me into the story emotionally. Scarlet and Richard have both tension and heated passion between them, making their story an exciting one. The conflict and drama kept me glued to the pages and anxious to find out what was going to happen. If I had not read the first book and had just started with this one, I&#039;m not sure I would have liked Richard, at least in the beginning. Since I did read the first book, I already liked him and cared about him going into this story. In this book we meet Scarlet and I instantly liked her. As a single mother myself, I could definitely relate to her in a lot of ways. She is just trying to take care of her son and he comes first in her world. I assume there will be one more book in this series about Tony, who is the third friend in their trio, and I&#039;m looking forward to reading his story.

This story is the follow up to &#039;Blackmailed By the Beast’ where readers got a sampling of Tony and Richard. The epilogue gave us a taste of Richard but the book was not as sweet as that little sample led me to believe. Now that I have read Scarlet and Richard’s story, it was just ok. The story overall was touch and go with some good scenes and then some unnecessary scenes. Richard was another alpha hero but (I guess there’s a first for everything) I didn’t like him. He was demanding and evasive – I never felt I had the opportunity to understand him. Now, I admit his obsession for Scarlet did seem to turn into love in his own unique way of doing it. Like Lily, Scarlet was rather innocent but her age and naiveté did not endear her to me. Some of her decisions were sketchy - she seemed not to be fully developed which did not allow for a connection between character and reader.

Richard had a very difficult childhood. Does that allow him some leeway in his dealings as an adult? Yes, he thinks so. And he knows that he will get everything he wants, one way or another. Unfortunately, his father’s advice is warring with his sense of right and wrong, and his methods for getting his way are eating away at his sense of morality. Regardless of his mental turmoil, he is determined to have Scarlet for his own. Contract of Shame is an intriguing story that has a great plot. The dialect between characters is a little forced at times, but overall this was an enjoyable, easy read.

It Started with a Contract by Sam Crescent