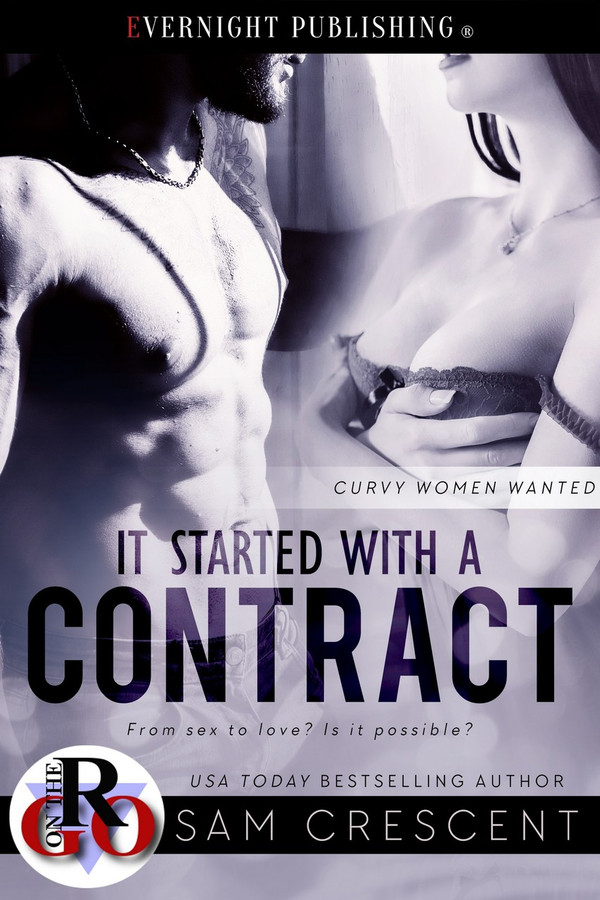 Hadley Green is desperate and needs a job, so when she sees an advertisement in the newspaper, she immediately gets an interview, without bothering to check the fine print of what it means to be at the beck and call of a very wealthy, very sexy man.

All of his life Easton Gray has liked fuller, curvy women. He’s a busy man, and he’s not interested in wining and dining women. So he turns his best friend’s advertisement idea into a reality, never for a second believing it would actually work.

The moment Easton sees Hadley, he knows he wants her, and he’ll do anything to keep her. At first, Hadley is not interested in being a plaything for this man, but then, she is desperate. This is better than being left homeless. She accepts, and finds herself yearning for more than the man’s body. She’s yearning for his heart as well.

Will Hadley be able to go from being owned to being taken? From sex to love? Anything is possible in this short, sweet, and dirty romance.

“Did I speak to you yesterday?” she asked.

“No, you spoke to my secretary.”

He had a male secretary. She hoped she hadn’t gotten him into trouble or anything. She licked her lips, and waited for him to direct. “Follow me.” He walked down the long corridor, and entered a room on the left. She followed him through the door, aware of her heels clicking on the floor. Her heart was racing.

“I have a company that comes to clean, and deals with everything else. This advertisement was … something else,” he said, taking a seat.

“Oh, well, I, erm, would it be best if I just left? If you hire cleaning staff, why do you need a housekeeper?” She stared into his dark eyes and couldn’t help but notice how sexy he was. Averting her gaze, she stared at the paper in his hand.

“I don’t need a housekeeper. What I want is something more … personal.”

“Yes.” He kept staring at her.

“I really don’t know what you want. I came for the job as a housekeeper, and I’m a good, hard worker. I don’t mind working early in the morning or late at night. I’ll clean toilets, cook, whatever you need me to do.” She was starting to beg now. The thought of having to pack up all of her stuff, and be homeless wasn’t helping either. Her rent was due in three days, and she didn’t have enough.

“I wanted someone to fuck,” he said.

The bluntness of his words startled her. “Fuck?”

“I don’t … huh?” She grabbed the newspaper, and pointed at the circled advertisement. “It says here housekeeper.”

“It also says ‘for personal needs and more’ in the fine print.”

She frowned and looked back at the advertisement. Holding the paper right in front of her face, she finally saw the fine print, and heat filled her cheeks. “Oh dear.” She looked at the paper, and then back at him. “You want a fuller woman? A curvy woman.”

“This isn’t some kind of joke?” She glanced around the room expecting to see a camera crew, and someone there to take in her humiliated face.

“No, it’s no joke. This was thought up by my friend and my secretary. My name is Easton Gray, and I don’t have time to dine with a woman. I also don’t want an escort.”

“What exactly do you want?” she asked.

“I want a willing woman who is not averse to spending time with me, and pretty much doing everything I say.”

Sam Crescent is the go to for hot curvy gal romance and this story sets the sheets on fire. The premise of this one seems oh so naughty but Hadley Green is such a sexy, girl next door type of woman that I had no trouble believing how she could find herself in this type of situation. Easton Gray could have come across as all kinds of kinky and domineering but instead he proves he is just a busy man who knows what he wants and ends up getting it by rather an unconventional manner. He makes no apologies for his Alpha male tendencies and over the top demands and while in some men and some scenarios this would be thoroughly off putting. With Easton in works. And as he comes to terms with his feelings I liked that I understood him more. Watching Hadley struggle with her hormones and her feelings of selling herself had me torn because I could see how easily she could have come to the desperation she found herself in. I enjoyed this undeniably connected couple coming to terms with what they had found with one another. This was a short, hot read that absolutely left me smiling. The Story: Hadley Green is desperate for a job, so desperate she shows up for a want ad interview failing to read the fine print. Easton Gray places an ad on a drunken whim to hire a curvy woman to be at his beck and call and when Hadley shows up he can&#039;t believe his luck. Can this arrangement turn into something more than either was looking for?

I am so in love with Sam for giving us this curvy girl series. Hadley needs a job bad she about to homeless and has no money in the bank. Finding an ad in the paper for a man looking for a curvy maid she goes to the interview. Never realizing she didnt read the fine print. Easton is a sexy billionaire businessman who doesn&#039;t have time to date one night joking with his secretary and best friend they make an ad for a women for him to sleep with but it looks like a job ad but you gotta read the fine print.but when he sees Hadly she perfect and he has to have her but will she agree. It was sweet and sexy and holla hot. I voluntarily reviewed an Advanced Review Copy of this book.

I love this series ! Even though the books themselves are shorter romance on the go reads that is my only complaint! I do not want these delicious stories where the curvy girl gets the guy to end! Easton and Hadley may not meet under the most romantic of circumstances however, they are in a place where they realise that they need each other. The chemistry between them is undeniable and a situation of convenience quickly turns to love and craving and every other delicious emotion and need these two destined souls could have. I loved this sweet and romantic read filled with emotion, feeling and scenes of passion that will definitely have your pulse racing! Another great book by the talented Sam Crescent. I loved it and cannot wait for the next installment in this series, just hope perhaps it is a little longer! Happy Reading!

I know this is another &quot;instant&quot; love but I really liked this story. Sam just has a way of writing something that sounds ridiculous but it&#039;s not. It&#039;s flirty, fun and Easton is smoking hot. And while I love that a lot of Sam&#039;s heroines are not skinny minnies, I wish they wouldn&#039;t dwell on the weight so much. Still a VERY good story and one I highly recommend.

Honestly, I didn&#039;t expected to enjoyed this book so much. But I did. It was quick, sweet and sexy. I liked both h and H. I felt theirs connection. And they were just perfect for each other.

I voluntarily reviewed a copy of this book For a story that is so short, I enjoyed it. It was quick, hot and I have to say totally steamy Don&#039;t want to say much about the book as it will tell the story, but if you in the mood for down on her luck girl with a OTT alpha then get this one

I love this series!!! The instant love and chemistry is explosive!! Easton is yummie and all hia demands are pantie melting!! Hadley [love her name] is so cute!! Love these two... Sam Crescent I need more from this series please!!

Easton and Hadley have a whirlwind romance starting with a contract. Doesn&#039;t sound romantic, but it really is. He wants her in his life despite the contract. He wants more. And she gets it all. Love , and security and incredibly hot moments. This is a great read and a great addition to Curvy Women Wanted. While it is not necessary to read book one, I highly recommend it.

Honestly, I didn&#039;t expected to enjoyed this book so much. But I did. It was quick, sweet and sexy. I liked both h and H. I felt theirs connection. And they were just perfect for each other.

Contract of Shame by Sam Crescent