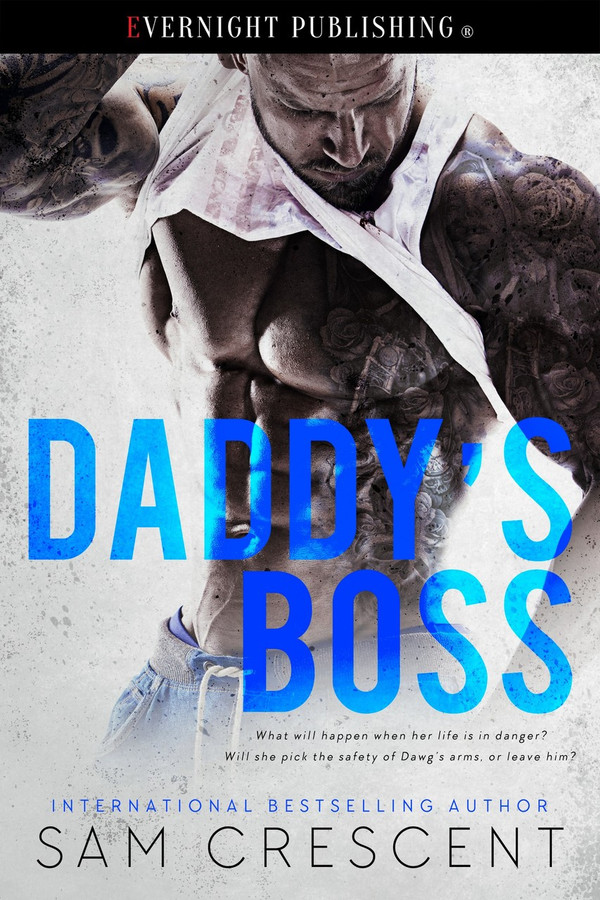 Lori Kinsley is tired of trying to save her father. He gets into one mess after another, and it’s only because she promised her dying mother that she’d keep an eye on him that Lori helps him. He’s now stolen from one of the most dangerous men in the city, Dawg Hampshire, and it’s up to Lori to pay the price.

What does Dawg want? Simple, he wants her.

Dawg has been planning this from the first moment he saw Lori. When she agrees to belong to him, he doesn’t intend to scare her off. He’s in this for forever. He’s seen the darkness in her eyes and intends to find out what put it there. When he learns the truth and Lori’s biggest secret, Dawg knows he will do everything in his power to protect her so she never has to witness that kind of brutality again.

But can Lori allow herself to fall in love with a man who kills? Does she even want to? And when Dawg’s “business” puts her life is in danger, will Lori pick the safety of Dawg’s arms, or leave him?

She didn’t want to be thinking about his cock. He stepped toward her, and she turned so that her ass rested against the sink. “What’s wrong, Lori?”

He’d said her name twice now, and it wasn’t helping her at all.

“Why did you bring me here?” she asked.

“I happen to really like this club. No other reason.”

She stared at him, and couldn’t detect any lie. Rubbing at her temple, she glanced past his shoulder.

“Why do you keep saying my name?”

“Because I like it. I like it when you say mine.” He stepped closer, trapping her against the sink and his hard body. The heat coming from him was too much. Her hands landed on his shoulders, and she had every intention of pushing him away. The moment she touched him, however, all of her plans went out of the window.

Gripping his arms, she stared at his lips.

They looked so hard and firm. She’d felt them against her skin in the little pecks that he gave her.

Would it really hurt to have a taste?

Her pussy was on fire, her nipples tight. She wanted to fuck him, no doubt about that.

Then why deny herself the pleasure?

At that simple reminder, she went onto her tiptoes at the same time, running her hands to the back of his head and pulling him down to kiss her. She whimpered the moment his hands touched her, and she wanted more. She didn’t want him to stop, not for a second.

They landed on her back, pulling her against him before gripping her ass tightly as he dragged her close.

She tightened her hold on his hair at the base of his neck, whimpering as his own touch did the same. There would no doubt be bruises from him, and she didn’t care. Instead, she basked in everything he did to her.

He lifted her up and placed her on the counter between the two sinks, his hands moving from her ass up to her dress straps.

Dawg took the straps and eased them down her shoulders, exposing her tits to his view. “They are so fucking perfect.” He cupped them in his palm, his tongue peeking out to flick each tip in turn. She whimpered as the pleasure went straight to her pussy. With him standing between her legs, she wrapped them around his waist, pulling him close, not caring that they were in a bathroom.

She’d known it would be explosive between them.

Thinking it was one thing, feeling it was quite another.

She didn’t want him to stop, and she feared that she’d never want him to.

Sam Crescent is my definite go to for steamy, sexy shorts and she never disappoints. Lori Kinsley and Dawg Hampshire are a couple that set sparks off on my eReader. Lori is a proud woman who has had some major challenges in her life. I enjoyed just how confident she was with her body and her situation. She took everything in stride and didn’t lie even in her own thoughts. I wish I could have even half of her strength. Dawg’s actions could have completed alienated Lori and myself as the reader however it was his follow up that endeared him to me. By no means was he what anyone would consider sweet, but he definitely had a soft spot for Lori. As readers I believe we all have a voyeuristic streak in us, I know I do and I definitely enjoyed the arousing club scene. This is one of those fabulous stories that take you away from your everyday, leaving you feeling slightly flushed and definitely feeling better. The Story: Lori Kinsley is used to paying the price for her reckless and often criminal father’s behaviour. But he’s gone too far now and landed her at the mercy of Dawg Hampshire. Dawg has bided his time and finally made a move. Now he just has to convince Lori she belongs to him.

This book is on the edge of taboo and I loved it, its seriously yummy and the characters are top notch.

When does one say enough? Dawg &amp; Lori came together because one was bound by a promise that made it impossible to walk away. Recommend

I loved this book it was different from the authors other series i loved the differences between the characters it was a great fun smexy hot read.

What I enjoyed most about this story is that Lori wasn&#039;t just a shy timid little women. And even though she was a bigger women, she enjoyed her life and was confident and strong and sassy. And I think that is what drew Dawg to her as well. He won me over when even though he had a contract with her he never pushed her to stick to it or force her to do anything. And even though she didn&#039;t want to go out with him, for three years he waited for his time and now everything was falling into place for him. Hot, Sexy, a Sort of enemies to lovers kind of feel to it...Definitely my kind of story...

Another great story by Sam Crescent! Daddy&#039;s Boss was an enjoyable fast-paced read. Hero, Dawg Hampshire was the boss, a crime lord that everyone feared including heroine, Lori. Dawg wanted Lori so he hired Lori&#039;s roguish father to work for him. Clever Dawg knew that her father would eventually try to steal from him ( and he did) but this was Dawg&#039;s plan all along so he could get want he wanted and needed - Lori! Lori was no shy woman and she expressed herself well in this story. But Dawg bend for her and her darkness and discovered her secret which caused them to trust one another leading to a great relationship! Yep, Dawg Hampshire changed completely for Lori and she did the same for him! Great epilogue ---10 years later ... loved that! Paul, Dawg&#039;s younger brother was an interesting character! Wondering if his story will be told... hint-hint! Author also gave a bonus chapter of &quot;Bred by the Billionaire: Breeding Season, 1&quot; at the end of the book too. 5 Dirty and sexy boss stars! *****

This was a great story. I read in one go. I was glad that Lori wasn&#039;t this little shy thing. She was bold and strong. And Dawg won me over, when I learned he shoot at the guy, who called Lori fat. You think a bit over board? Maybe. But I don&#039;t care. He was already standing up for his woman when they weren&#039;t even together, yet. He was dangerous and cold, but with Lori he was something else. I really liked Dawg.