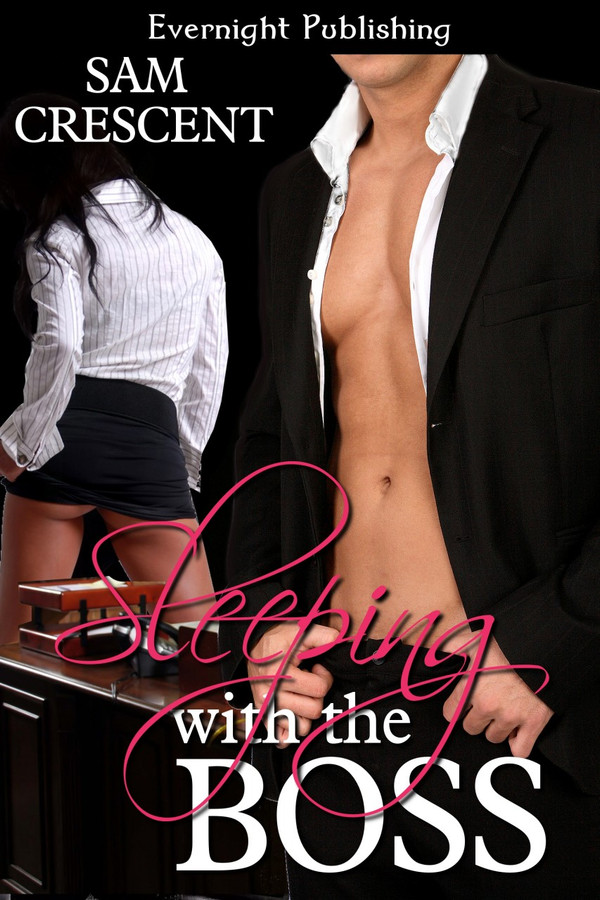 Heather Booth has been in love with her boss since the moment she started working for him. The only problem, Julian Goff is a horn dog. When he’s ready to ditch a woman, he gives the women a piece of jewellery and sends them on their way.

When Heather and Julian get into an argument over her behavior outside of work, the passion between them ignites. They have sex on his desk when anyone could walk in and catch them.

Julian wants Heather more than he’s ever wanted any other woman in his life. He doesn’t do commitment. During a private conversation with her friends, Julian hears Heather’s true feelings for him. He has no choice but to let her go.

Never before has a woman got under his skin. Can Julian earn Heather’s trust back, and will he finally have the courage to give the woman he loves a ring?

He wanted more from her. Releasing her hand he wrapped his arm around her waist pulling her in closer. Her curves were soft against his hardness, the roundness of her tummy rubbing against his semi-hard cock. He wanted her. There was no denying his need for her. Julian turned pushing her back against his desk. He wasn’t thinking. All he could do was react. Heather had gotten under his skin. He needed to claim every inch of her and wipe the thought of other men from her mind.
Lifting her onto his desk, he spread her legs wide to make room for him. He pushed the skirt up her thighs revealing her pale flesh. Gripping her thighs he felt the weight of them. She was bigger than the women he usually liked. However, he couldn’t seem to control himself around her. What had changed from Friday to Monday?
You’re single, and you’ve always wanted Heather. You just liked having her around you more.
He shut off the thought and pushed it to the back of his mind.
“We shouldn’t be doing this,” she said but made no move to fight him as he began to unbutton her blouse.
“Shut up.” He captured her lips once again to stop her from thinking. She whimpered then sank her fingers into his hair. Pushing the fabric of her blouse out of the way, he broke the kiss to look at her tits.
Her lace bra covered her. He saw the red tips of her hard nipples. Julian unbuttoned the clasp of her bra pushing each side out of the way.
Her heavy breasts popped out. He cupped one in his hand feeling the weight and teasing the bud with his thumb. She let out a cry of pleasure. Her nipples were sensitive at the lightest of his touches.
Julian kissed along her jaw until he went down to capture one red nipple between his teeth. She gasped. The sound was heaven to his ears.
Heather pulled his head away then tore at his pants. She was all fingers and uncoordinated. He pushed her hands out of the way. In seconds his belt was undone and his pants down to his knees. He pushed her skirt to her waist appreciating the small piece of fabric that covered her cunt from his view, then tore the final obstruction from her body.
From the light shining through his office window he saw she was wet and ready. Taking hold of his cock he placed himself at her entrance then sank inside her, slowly. Her tight pussy gripped him. Her feminine scent surrounded him as he plunged all the way in then pulled out. His cock was covered with her cum.
The sounds escaping from her moved him forward. He grabbed her hips and slammed inside her. Several items on his desk were thrown to the floor in his desire to feel her wrapped around him. Julian pulled her to the edge of his desk. His hands were on her hips as he fucked her hard and fast. She held onto the edge, her tits bouncing with every thrust.
“Play with yourself. I want to feel you come,” he said. His climax was so close, and he didn’t want to lose control before she did. Her fingers stroked her clit. Julian watched as he slowed the tempo down. “Let me taste you.”
She pressed the tips of her fingers to his lips. He sucked her fingers inside his mouth. Her taste glided along his tongue. She was sweet and musky.
He let her go, and she teased her clit. The flutters of her cunt increased letting him know she was close to climaxing.

Classic case of man who doesn’t want to commit. Heather is a great solution to his commit phobia…but he almost loses her in the process. The sex is hot, the characters believable, what’s not to love?

I’ve been a fan of Sam Crescent for a while and when I saw this book, I knew I had to review it. I have read many of her books and enjoy her writing style. I love her spunkiness and the way she doesn’t care if it will offend anyone or not. She writes with passion. I started reading this book and I just wanted friends like Heather had. Then I realized that each one of them still keep some secrets from each other. They are there for each one and they speak their minds and that are the kinds of friends that everyone needs. I loved how Heather went ahead and had an affair with her boss Julian. She knew how he was with women and she still took the chance knowing that in the end her heart would be broken. That just shows you the kind of woman that Heather is. She is a little down on herself because she isn’t skinny like every woman wants to be. It seems that when she gets with Julian she starts feeling better about herself. I can’t wait to read about the other three. I hope that each one gets their own story because they each have different personalities that you just can’t ignore. I was trying to go slow and take this book in but it just sucked me in and away I went. It did have a little bit of spanking, but not enough to call it a BDSM. I would tell everyone to read this book because it has a strong woman who is willing to take the chance. She also knows that no matter what her friends will be there for her whatever the outcome is.

It&#039;s almost torture to be in love with her boss, just ask Heather Booth. She has no illusions that it would ever work since he doesn&#039;t do commitment. She should know since she buys all the jewelry that he gives at the end of his affairs, plus she&#039;s just not his type. How on Earth could she expect him to be attracted to her when all his other dates have been the tall, thin model types. Out at a club with a client, Julian Goff can hardly keep his eyes off Heather when he spies her dancing with her friends. Sparks fly when Julian confronts Heather about her after hours activities and suddenly Heather finds herself sleeping with the boss. They both know that there&#039;s a time limit on their relationship since Julian runs as far away as he can from marriage. But will he really want to keep running? I loved this book! Heather and Julian are just a great couple to read about, not only is there incredible chemistry between them that leads to scorching hot sex scenes that also manage to be tender, but the story just feels really solid too. I was also thrilled to see that this book is listed as the first in a series called Friends, Men and Secrets because the little teases we get of Heather&#039;s friends lives leave you waiting for their stories. I really just love her and her group of friends! They are such a great example of solid friendship which was just another bonus to go along with Heather and Julian&#039;s story. I had never read a book by this author before but I&#039;ve already gone and added others to my to read list and I&#039;ll definitely be watching for the next book in this series! I&#039;m just keeping my fingers crossed that it&#039;s soon!

Fear the Boss by Sam Crescent