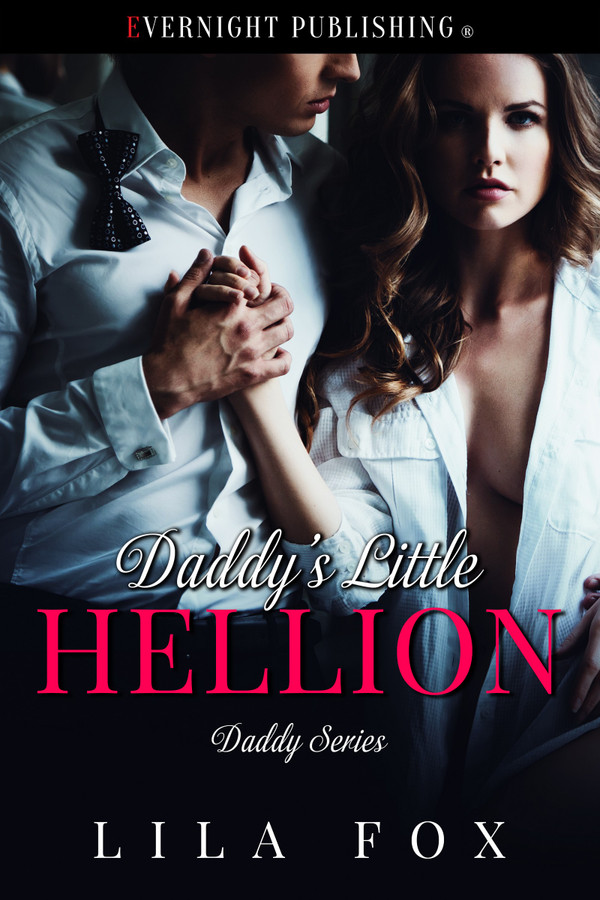 All her life, Jenna has fought just to be seen. She never thought she would find someone to love her the way she is. She knows she can be difficult, but underneath, she’s a scared little girl in need of a daddy.

Trey has been looking for a little. With his dominance and height of six and a half feet, it seems impossible to find a woman strong enough to put up with him. When he sets his eyes on Jenna for the first time, he’s instantly attracted, but she’s so timid, hiding behind other people. He doesn’t think she’ll be able to deal with a man like him.

As he realizes she’s not timid but bruised and in need of help, he steps in to protect her. It takes losing someone close to them to bring them together, but will another act of violence tear them apart again?

Then he pushed her legs apart enough to fit his shoulders and settled in between them.

She screamed at the first touch of his tongue to her swollen clit.

He chuckled when she tried pushing him away at the same time as pulling him closer with a grip on his hair.

“I’m going to eat your cunt until I throw you over, but then I’m going to fuck you so good you’ll never be able to get me out of your head, and you’ll know without a doubt that you’re mine. Do you understand, pet?”

“This first one is going to go fast.” He smiled, bent his head, and bit down on her clit at the same time he thrust two of his fingers into her. That was all it took for him to throw her over. He kept at her until she collapsed, gasping for breath on the mattress.

Chuckling at the dazed look on her face, he guessed in the future that this would be the only way to keep her quiet unless he shoved his cock into her mouth.

She nodded and exhaled, making him smile.

She squeaked, and her body twitched, but otherwise, she didn’t move.

He moved up until he covered her body. “Are you ready for the next one?”

“Oh, you can, and you will come as many times as I want you to.”

She put her hands on his hips as if to shove him away, and it just made him grin because he could tell she was trying to decide if she should push him away or pull him closer.

He guided his cock into position until the head pressed against her sopping cunt, then started to dive in.

He didn’t give her time to adjust to his size, just kept thrusting until he was all in.

He would have been concerned if not for the fact she continued to raise her hips as if to take him deeper. She tried to pull him against her.

“You can take me. Just relax for a second, pet.” He didn’t move until she had calmed under him. Fuck, she was so tiny. He was afraid he’d squish her, but she kept trying to tug him closer.

His thrusts started slow and easy, but his control quickly slipped until he was pounding into her. One of his hands went to her hips to keep her steady while the other one curled around the back of her neck before he bent and took her lips in a scorching kiss.

God, the feel of her hot, wet cunt wrapped around his cock was the best thing he’d ever felt. When she started to tighten on him, he lifted his head. “Fuck, pet. That’s it. Come for your daddy.”

She tightened on him so much as she came that he was unable to continue to thrust until she started to come down. He gritted his teeth at the pain and pleasure of being constricted in her tight cunt.

She finally lost her grip on him, so he slowly thrust inside of her as he studied her after she relaxed back. God, he thought she couldn’t get any more beautiful, but he was wrong. She had a rosy flush a woman only got after being thoroughly satisfied.

“You’re mine. Do you understand, pet? I only want you.”

She gazed up at him and nodded.

“Good.” He pulled out and flipped her onto her stomach and up on her knees. He lined up his cock and slammed into her, making them both groan.

Trey growled. “Take all of me.”

He rode her hard for a minute before he slowed. “You’re going to come one more time.”

She shook her head frantically. “No—” she cried out.

“Oh, yes, you are.” He reached for the lube he’d set off to the side. “I’m going to make you come while I’m stretching this ass out.”

She tensed underneath him. “Wait… What? There’s no way.”

“Oh, yes, there is. I’ll make sure to stretch you, baby, and you know I’d never hurt you, but I am taking this ass sooner than later. I want all of you to belong to me.”

“Fuck, are you telling me this is a virgin ass?”

“How in the hell am I supposed to control myself with you telling me shit like this? Fuck.”

He stopped his thrusting to press a good amount of lube onto one of his fingers.

“Now relax your ass muscles, pet. I guarantee you’ll love this.” He started pressing his finger into her tight ass.

“Yes, you’ll take everything I give you and love every minute of it. Now, relax your ass and push out. If you absolutely hate this or you feel pain, tell me to stop.”

One of his hands came down on her ass softly when she continued to resist. He did it over and over again to get her attention off what his finger was doing.

Finally, he was able to push through the tight muscle in her ass and press in until he had his whole finger in her.

“There you go, baby. You took your daddy’s finger. Now you’re full in both your holes, aren’t you?”

He moved his finger inside of her ass at the same time he thrust his cock into her. “This body is mine. This ass is mine.”