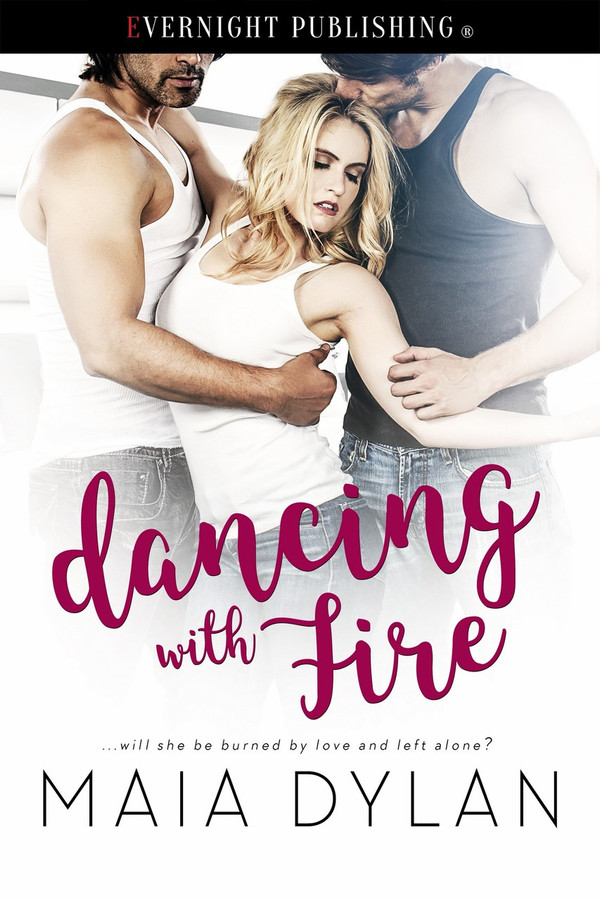 Lucabella Strand is tired of waiting for the Firestone playboys to honor her request for a meeting. Raising rents, and hiring a musclebound douche-bag as a building manager to threaten and torment them is not how reasonable landlords treat their tenants.

Zac and Hayden Firestone have no idea they even own a residential building, and when Bella accuses them of unfair treatment they immediately deny it. Until she shows them her proof. She leaves both men reeling, but believing that she might be the one meant for them. Seeing her for the second time leaves them in shock.

A misunderstanding and a hidden secret quickly comes between them, and finding a way back together proves difficult. Will taking a chance and dancing with fire lead Bella to a future she had never thought she’d have, or will she be burned by love and left alone?

“Fine, I’ll tell you and risk the swelled heads I know it is going to give you both. This past week has been fantastic, and I love that we are getting to know each other slowly. But you have to know that the two of you are pretty potent in the arousal building department, and I have learned that I turn into quite the potty mouth when I am sexually frustrated.”

Zac leaned in with a growl and placed an open mouthed kiss on her neck. “Damn, that is good to hear. I go home every damn night harder than I have ever been, and have to take matters into my own hands, if you catch my drift.”

Hayden growled as he leaned in and pressed a similar kiss on the opposite side of her neck. Bella moaned and dropped her head back, immediately granting them both better access. “Fuck, Bella. Beautiful, beautiful Bella. It’s not our heads that are swelling at your admission.” He reached down and gently took her hand, tugging it gently and placing it in his lap.

“Oh, God,” Bella moaned at the feel of his erection behind the zipper of his suit pants. She squeezed him in her hands, eliciting a groan of approval from Hayden, and wanting to hear Zac, she reached over with her free hand to do the same to him.

“Fuck,” Zac growled against her skin before she felt his teeth pressing gently on either side of the tendon that ran down the side of her neck.

“Baby, we have been giving you time, and if you need more, then we will stop everything right now and back off.” Hayden’s voice was thick with arousal.

Before she could change her mind, or get so lost in them both she ended up naked with them on her damn couch, she pushed to stand up in front of them. The looks of disappointment that filled their expressions morphed quickly to understanding, and Bella felt the last part of her heart, the tiny part she had been holding back from the two of them, become theirs. She was in love with them both.

She held out a hand to each of them. “My bed is not big. It’s only a queen size. But I think among the three of us we can find a way to make it work.”

DANCING WITH FIRE starts off with Hayden in his office, hearing a commotion between his secretary and someone unknown. He gets involved and is instantly attracted to Bella but confused as hell, as she tells him a story about rent, property not being up to scratch, and then produces their letterhead as proof. Hayden&#039;s twin brother, Zac, gets involved and they both try to figure out what has happened to Bella, whilst also trying to convince her to be with both of them. OK, so first off, Hayden is a jerk - first class! He sees an event, has one short conversation, and assumes the rest. I really wanted Bella to make him grovel, but the fact he was clearly sorry and his apology was sincere, I could understand where she was coming from. Zac is the gentler twin, although no less dominant when he needs to be. I liked both Zac and Hayden as they rounded each other out. With secrets and twists, this is a fast-paced novella that bounds along, taking you with it. Well written, with no editing or grammatical errors to disrupt your reading flow, this is a story with plenty of action, in and out of the sheets. Maia Dylan is a wonderful author and I look forward to reading more of her work. Definitely recommended by me. - See more at: http://erotic.theromancereviews.com/viewbooksreview.php?bookid=23644#sthash.0PgiNT4w.dpuf

Bella storms the office building where Zac and Hayden have their offices to demand they stop raising rent in the apartments they own. Zac and Hayden have no clue what she is talking about and she leaves before they get anymore information. As the three of them piece things together, they start feeling emotions. Zac and Hayden have always known they would share one woman between them and they know that Bella is that woman. Is this all going to work? And who is causing problems that may put Bella in danger?