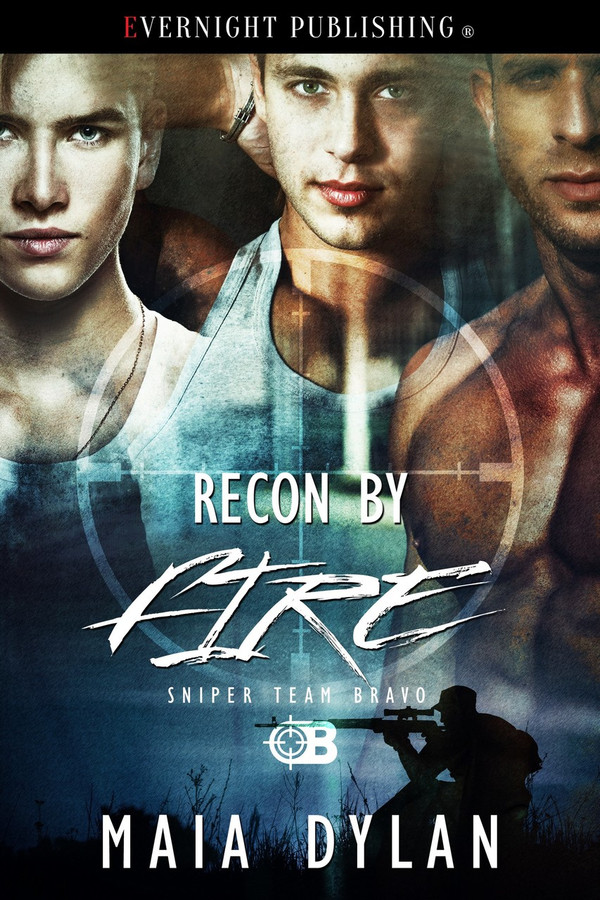 A sniper will employ a recon by fire technique when the position of their enemy is unknown. It can also be a tactic for two men looking to convince the man they both want for their future to take a chance on them.

Nick Jones and Aiden George are committed to each other. When they meet a marine medic who ignites a passion within both of them, they're determined that he's the third they never knew they were looking for.

Sam Wilson is plagued by doubts instilled within him at a young age. When he gives in to one night of passion with two servicemen he meets during an attack on the base, those doubts make him run. When he meets them again eighteen months later, the three must overcome Sam’s past, defeat an unknown enemy, and pursue the future Aiden and Nick are convinced they can all achieve together.

Will they be able to find their target in time, or will the fire of their love be left to burn out completely?

Sliding into the booth, he passed Aiden his beer and checked his watch. It was almost seven-thirty. “I missed you like this.” Aiden’s amused voice had Nick looking up.

“Nervous,” Aiden replied, and Nick felt a warmth rise in his neck and knew he was blushing. “God, you are even blushing. You were like this with me at the beginning, too.”

Nick scoffed and took a large slug of his beer. “And could you blame me? You were out of my league, and I knew it.”

“Hardly,” Aiden said with a shake of his head. “I might have outranked you, but I was never out of your league.”

“It wasn’t your rank that made me nervous, babe,” Nick said as he leaned forward. “You are hotter than hot, and I always thought you’d realized you could do better than me. Add to that your nature and your personality and you pack a pretty powerful punch.”

Aiden held Nick’s gaze for a moment then nodded. “I find it funny that I was thinking the exact same thing. Here you were, this powerful, forceful man, who wore authority like a goddamn jacket. That dominance and confidence that you exude is a real turn-on for me.”

Nick sat back and grinned. “Yeah, I kinda noticed how turned on you got when I ordered people around. I knew that you’d love it in the bedroom, too. And how right I was.”

The two of the laughed, then became aware that they were no longer alone almost at the exact same moment. Nick turned to the man who stood beside their table holding a beer in his hand, and a carefully blank expression.

“Hey, it’s good to see you,” Aiden said first and slid further into his side of the booth. “Have a seat.”

Sam hesitated for a moment, and Nick shot a quick glance to Aiden. He had no idea what the hell was going through the man’s head, but Sam seemed like he regretted having turned up. Sam’s face cleared to a friendly expression, a smile on his handsome face, but it didn’t reach his brown eyes.

“Good to see you, too.” Even Sam’s tone sounded off to Nick, and his frown deepened. “The rest of the team are just coming in, and Dev wants to catch up on some business stuff, so I thought I’d come over and say hey. Sorry, I can’t join you for that drink, but maybe some other time.”

Nick caught Aiden’s look of confusion and knew that his lover was just as confused as he was on how to continue. So, Nick knew that if they were going to get to the bottom of Sam’s sudden change of heart, it would be up to him. He should probably go softly, try to coerce Sam into taking a seat and talking about things calmly, but that just wasn’t him.

“Sam, sit down in the booth.” Nick’s voice automatically dropped to the tone he employed when he was delivering his men’s orders. Sam’s eyes widened a little, but Nick noticed that his relaxed posture, as fake as it obviously was, because the man was anything but, seemed to snap taller as if he were standing at attention. “Now.”

Sam slid into the booth immediately and seemed both shocked to find himself sitting there and pissed off at himself for complying. “I really should—”

Nick figured Sam was about to launch into a reason why he should leave and cut him off before he could do it. “Unless the end of that sentence is ‘tell you both what was just going through my head’, then we don’t want to hear it.” Nick locked his gaze to Sam’s and held it.

Aiden chuckled, drawing his and Sam’s attention. “Christ, are you two gonna just stare at each other, waiting for the other to blink? Let me tell you something you might have suspected about the good sheriff here, Sam. He is stubborn as hell and won’t ever back down. Especially when it is in regards to someone he wants.”

Nick saw Sam shoot him a quick glance as if to see how he would react to Aiden saying Sam was someone that Nick wanted, but his expression remained clear. Aiden spoke the truth, and as soon as Sam came to realize that, the better.

Sam sat back in the chair, his eyes narrowing. “You know, I’m a Marine rifleman. I can be pretty damn stubborn myself.”

Nick grinned. “Hell, I know that. Aiden and I witnessed that in Afghanistan, but this is different. I want you enough to fight to get you to tell me what happened between the phone call this afternoon, and you standing by this booth tonight. And I reckon you want me and Aiden enough to put aside that stubborn streak of yours and tell us. The attraction we had for each other was immediate and off the charts. The night the three of us got together was pretty fucking powerful, too. Aiden and I want the chance to see if the three of us can have that with you on a more permanent basis, and I reckon that phone call this afternoon, and the fact that you’re sitting with us now, means that you do, too.”

Nick waited, and hoped like hell he was right.

Aiden and Nick have been a committed couple for years now, but both men agree there’s just something about Sam that sets them both off. Neither Aiden nor Nick though know how to bring Sam to them without scaring the Marine off completely. Sam, for his part, can’t help the hot fantasies he has about both Nick and Aiden – but his difficult past makes it hard for him to trust that he’s enough for the two spunky men. Can they work this out together? There’s nothing I love more than a hot military romance, and a M/M/M threesome just makes it all the more better. There’s an awesome and strong cast of secondary characters – the rest of Sniper Team Bravo. I loved the easy camaraderie between them all both out on the battle field and settling down to a “normal” life. I also found that there’s plenty of good plot for readers who don’t like their erotic romance to just be a string of hot sexual encounters. This book really felt like it ticked all the boxes for me – loads of character back story and emotional plotline, arson investigations, nefarious villains from people’s past. Add on hot ménage sex and this was a delicious read and one I will thoroughly enjoy for multiple re-reads in the future. I was delighted by how layered and deep each of the characters were – not just Aiden, Nick and Sam, but also the other members of Sam’s team. It’s clear there are more stories coming up, and having missed the first two stories didn’t detract from my enjoyment of this at all. I loved the author’s tone and voice and really found myself swept up in the story and eagerly turning the pages. There was an interesting lead-in to the next story that I’m sure will hook a number of readers into getting the next story too. A fun, sexy and hot ménage romance full of delicious military men that I feel is sure to appeal to many readers.

Book 3 of Sniper Team Bravo. Like the other 2 books in the series it is a enjoyable read and entertaining.

I&#039;m really digging this super hot series by Maia Dylan! It&#039;s got great action, as I&#039;ve come to expect from her, but the characters she&#039;s built in this series really pulled me in. It was so easy to get invested in them and their relationships and I&#039;m waiting patiently for the next in the series! (Is it done yet? ;-)

Sam first met Nick and Aiden whilst they were all in Afghanistan. Sam is Lance Corporal Samuel Wilson, Medic/sniper with Sniper Team Bravo whilst Nick is Captain Nick Jones and Aiden is Senior EOD Technician Aiden George and they’re all serving in different branches of the American Armed Forces in Afghanistan. There was an immediate attraction between the three of them but as Nick and Aiden were already in a committed relationship Sam couldn’t stand the thought that he was just a spare in their relationship, a third wheel so he went back to his team and disappeared as soon as he could. Nick and Aiden have been in a committed relationship for almost a year, they’re happy and until they met Sam neither realised that maybe they were missing something, a third. They spent one night together them Sam went back to his team, Sniper Team Bravo, not long after that they all retired from the armed forces. Nick and Aiden spend the intervening time tracking Sam, so when he and the rest of Team Bravo settled in Redwood Falls Nick made secures the Sheriff’s position there. Aiden is an author of m/m erotic romance books and has managed to make a living from writing. It’s not until the Team have a stalker who tries to blow them all up and Aiden is called in to find and disarm the devices he planted around their property that Sam realises they are living in Redwood Falls as well. Nothing is easy for the three men when they try to start a relationship, Sam has had a horrific childhood that he has still not recovered from. Who can blame him when his parents made sure he knew from day one that the only reason he was born was so his older brother would have a perfect biological match to fight and beat his Leukaemia. When his brother gives up and allows himself to die Sam’s parents put the blame entirely on his shoulders. Not only do they have Sam’s issues to deal with they are told that the man who murdered his parents twenty years ago, “the platform bomber” has been released from prison. Recon by Fire is a brilliant addition to the Sniper Team Bravo series and I have to say each book drags you further into the lives of the team and their assorted partners. I can’t wait for the next book! I definitely recommend that you get a copy and if you haven’t read the first two books you need to read those first!

Another great addition to Sniper Team Bravo, and even better, it&#039;s MMM! Loved it, and seeing the guys on the team again! Totally 5 stars, I&#039;d give it more if I could! Great read! Definitely recommend!

Dancing With Fire by Maia Dylan