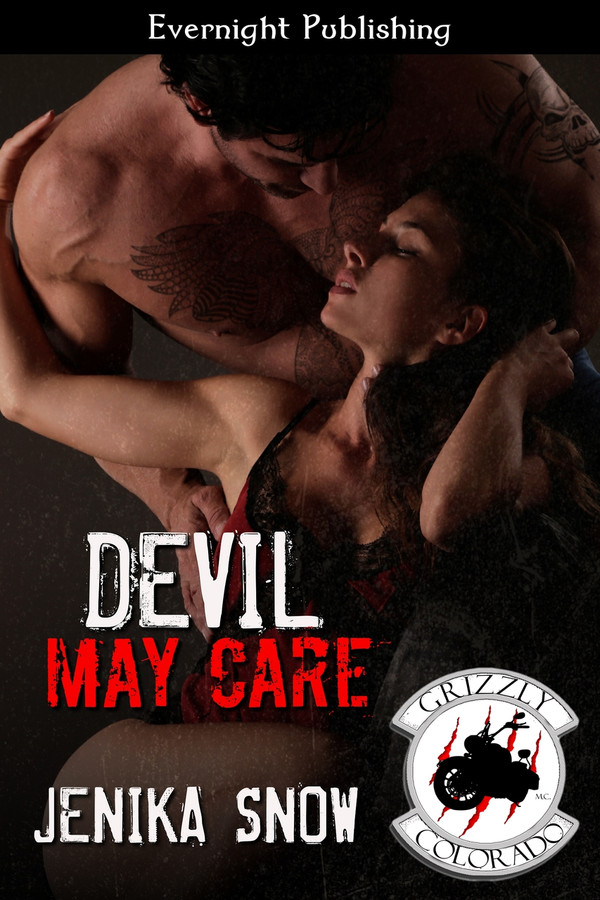 Jakob, a bear shifter and member of the Grizzly MC, is at a point where his life has no meaning. The darkness and loneliness slowly consume every part of him. In order to find that spark again, he became reckless, acting out and being even more dangerous than ever before.

Saya is instantly drawn to the bear shifter she sees fighting bare-knuckled and dirty. He’s handsome in a brutal way, but also seems angry at the world. But the attraction between them is undeniable.

She sees the aggressive, possessive side of Jakob, the side that will take down anyone that tries to hurt her. He’s deadly and menacing, and is power all wrapped in one dangerous grizzly shifter.

When Jakob is with Saya he feels there is meaning to his life. Looking at her, being with her, gives him that high he desires. He can’t let her walk away, no matter what. Making her see that she is meant for him, that she is his in all ways, is Jakob’s main goal now. He won’t fail at it.

Her big tits, wide hips, and luscious as hell ass had him so fucking hard his cock ached, his balls drawn up tight. Reaching down, he adjusted his cock through the towel and grunted at that small contact. Damn, he fucking wanted her like a fiend, and how twisted was that?

He pulled his towel away and grabbed his cock, not caring what he was about to do, even if he should. Yeah, he was going to be a fucker and jerk off while thinking about Saya. Closing his eyes, Jakob thought about Saya in his room, standing before him in nothing but a pair of white panties. A groan ripped from him.

She’d have a trimmed thatch of dark hair covering her cunt, and he’d be able to see it through the thin material. She’d do whatever he said at his command, and her big tits would sway slightly as she moved toward him. She’d want him so fucking much.

Jakob started really jerking himself off then, stroking his hand over his dick from root to tip and feeling the tug of pleasure at the base of his spine.

Her nipples would be so hard, so fucking hard his mouth watered for a taste. Jakob held in his groan at the visual he created, at the pleasure thinking about Saya caused. Starting to really stroke himself, he kept his eyes closed and pictured what he’d do to her, all the dirty fucking things he’d do to her. He’d spread her thighs, and smooth his hands down her inner legs, touching every part of her, making her his in all ways. He’d touch her pussy, pull her labia apart, and then feast on the pink center. She’d be begging for more, pleading for him to make her come. He wouldn’t deny her, wouldn’t make her suffer, because watching her get off would be the best fucking aphrodisiac.

His throat tightened as pleasure moved through his body, starting at the base of his spine and encompassing every inch of him. He stroked his cock faster, applying more pressure to the shaft, needing to get off.

Fuck, I want her.

He wanted to make her his. His bear wanted her as his mate, as only his.

I want in her body, to claim her pussy.

When he was finally able to breathe normally, he opened his eyes and stared at the ceiling. After a moment he sat up, looked down at the mess he’d made on his abs, and felt self-disgust fill him. He’d just masturbated to a female he didn’t even know, a female that clearly ran from him and what she might feel.

He scrubbed a hand over his face. He wasn’t one to follow the rules, obviously, because he was a Grizzly Patch, after all. He’d also never been one to want a female so badly he couldn’t even think straight, couldn’t get her off his mind. But Saya was making him want to break a lot of fucking personal rules and cross lines to get her.

Two broken people find their way to each other in Jenika Snow&#039;s DEVIL MAY CARE novella, which brings together two motorcycle clubs and a paranormal shapeshifter concept. As the daughter of the Death Bringers MC president, Saya is no stranger to club life. She&#039;s packing around a lot of guilt because her father is in jail for protecting her. As a member of the Grizzly MC, Jakob is part of an elite group of shifters. He&#039;s fed up with life until he sets eyes on Saya. What follows is a sizzling hot story told in typical Jenika Snow style. There are plenty of panty-melting scenes as these two characters explore their attraction. This story can be read as a stand-alone, but I found that it definitely sparked my interest in reading more in the series. Who can go wrong with a series featuring hot MC members plus grizzly shifters? - See more at: http://erotic.theromancereviews.com/viewbooksreview.php?bookid=4649#sthash.7M1czSfr.dpuf

Jakob lives the life of an MC without a doubt, but the darkness is starting to take over him and his bear. He has no idea how to find the light until she is drawn to him after one of his fights. Saya has no idea why she is drawn to the Grizzly MC member and she has sworn off of bad boys in general. Despite her past, she is unable to walk away from Jakob even at the risk of losing her heart and soul to a bad boy. Jakob had no idea what was missing in his life until she walked right up to him. When he sees her defend herself against an predator, he knows she is the woman for him and his bear, but will her past or her imprisoned father keep them apart? Devil May Care is a wonderful story, but it is low key compared to the other books in the series. I found the characters interesting and Reaper a father unlike all others. The storyline is interesting, but not has exciting as I am accustomed to with Ms. Snow. I would not have missed this installment because the story of all the Grizzly MC members bring the world to life and a break from the tension is always entertaining. - See more at: http://www.coffeetimeromance.com/BookReviews/devilmaycarebook12byjenikasnow.html#.VvulwcK0Opp

I love this whole series. Grin an Bear it left me wanting to know more about Jakob. Jakob is at a point of his life that all he feels is the darkness swimming around him. He wants things he don&#039;t think he will ever have. When Saya sees the bear shifting man in the ring, she realizes she has seen him before outside her kitchen window. There is something about Jakob that calls to her. She made herself go to him and try to talk to him. After that didn&#039;t work out so well she found herself outside in a situation and Jakob comes to the rescue. Jakob feels the lightness Saya brings him and he wants to have her forever. Saya feels this connection with Jakob and wants to be with him. I love Jakob and Saya. Get this book now to see what happens with these two beautiful people!!!!! &lt;3

Hot Dayum..... Jakob is one fine sexy Grizzly. Loved this story. How Saya brighten his darkness, and how he was able to open her heart again . Sweet, kinky, dark smoking hot goodness Amazing

Jakob and Saya.....What a couple. The connection and sex between these two are....off the charts. Now, I love all the Grizzly&#039;s but Jakob may be my favorite. He&#039;s so tortured and lost and it seems that no one sees him drowning. Saya may be the only thing that can save him and she doesn&#039;t even know it. Saya has nothing but guilt bearing down on her soul. Guilt for not listening to her father and the consequences that followed it. Guilt for leaving her father behind and moving away. Can Jakob and Saya be each others redemption? This is my confession: As always, I wish we had more pages w/ these two, but I&#039;m still happy. I also cannot wait to see what Jenika has in-store for us in the next Grizzly installment.

Another yummy Grizzly MC book from Jenika Snow. It&#039;s the next generation of Grizzly&#039;s and this books is about Jakob. Jakob is at a point in his life where he&#039;s had it with everything and he feels that his life has no meaning. Saya is the daughter of a MC prez and has had a rough time. She&#039;s decided to go to school to better her life. When she first sees Jakob she&#039;s drawn to him and his bear. The passion between these two is off the charts hot. Saya has grown up among a MC and understands the life so she&#039;s a perfect match for Jakob. There is nothing like a hot sexy kinky alpha and Jenika Snow writes some of the best. If you love shifters, MC, alphas, kink, and strong heroines the. Devil May Care is the book for you. I highly recommend reading this series in order so you fully get the enjoyment of seeing old characters and the next generation living life to its fullest. Jenika Snow is one of my go to authors and she doesn&#039;t disappoint with Devil May Care. This book is full of yummy hot sexiness.

I loved this book. It&#039;s kind of neat to see the kids of the orginal members of the club, find their mates. Jakob was a favorite of mine and his match with Saya was perfect. I was actually happy to see that while something bad almost happened to her in the past, nothing bad happened to her in the present. This MC series is a favorite of mine because I happen to like shifters and they are all grizzlies!!! Can&#039;t wait for the next book.

As always I love Jenika Snow&#039;s MC books and have read just about every one. Her earlier books are more raw and gritty, filled with violence and sex. I&#039;m finding her newer stories to be more focused around the relationships between the hero and heroine. Nothing wrong with that. They are still good stories, just tamer with a lot less MC drama. Sorry to say the one thing that has been consistent in all her books is the lack of editing, though. This story even had some red lettering in it, which is usually the editor&#039;s changes. Not in any way blaming the author for this.