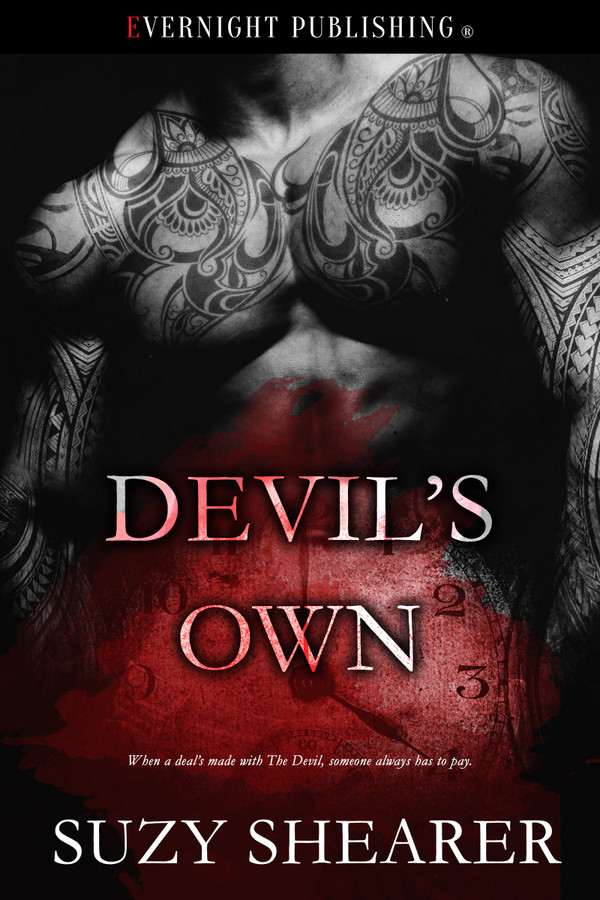 When a deal’s made with The Devil, someone always has to pay.

By 51, Miranda Fleming had become a world famous artist. She lacked nothing, except a relationship. In fact, in her entire dating life not one man had ever asked for a third date. She often joked she was the oldest living virgin.

But that was about to change and not in a way that she could’ve ever imagined—or desired.
He was The Devil. Satan. Lucifer. The Beast. So many names, the list went on and on. A taker of souls, a dealer of desires and greed, the ultimate evil.

And now it was time to collect on the deal made about Miranda years ago. He’d kept her pure since then, just so he could torment and torture her.

That is, until he tired of her.

A smirk and a raised eyebrow were the last things Miranda saw as the doors closed on the elevator. She knew the man could have easily stopped the doors from closing, but instead, he’d chosen to give her a cruel grin. Fortunately, the next lift arrived quickly and Miranda rode to the twenty-fourth floor to her grandfather’s solicitor. After letting the receptionist know she’d arrived, Miranda was asked to take a seat.

She could barely hide her audible groan of dismay when she saw the callous man from the lift leaning against one wall, looking completely relaxed. She glared at him as she sat but had to admit he was strikingly handsome. Very tall. She couldn’t recall ever seeing a man as tall except on basketball teams. Miranda guessed he was over six-foot-ten, maybe closer to seven foot. He wore a black, well-tailored suit with a black silk shirt and red tie, but it couldn’t hide his muscular body. To top off the perfect picture of masculinity, he had black hair, and from the distance, it looked as if his eyes were black also.

Mmm, so much black—but on him, it looks stunning. Yep, and very sexy. Wouldn’t mind if he was the one sharing my sex dreams.

Ten minutes later, her name was announced and she stood, surprised to see him push himself off the wall at the same time as another name was called.

Miranda followed the receptionist to a door and walked in. Her grandfather’s solicitor stood, walked around his desk, and took both her hands in his aged ones.

He dropped her hands. “Mr. Iblīs, glad you could make it.”

Miranda couldn’t believe it when the lift man entered behind her and shook hands with Mr. Williamson. The man nodded at Miranda when the solicitor introduced him to her.

“Please, both of you take a seat.”

Confused as to why this stranger would be at the reading of her grandfather’s will, Miranda sat in the chair alongside the man.

“Right. Now as I imagine you are already aware, Miranda, your grandfather left everything to you except for a few personal items for Mr. Iblīs. As you know, he’d already settled a sum on his housekeeper, Mrs. Jenkins, earlier this year.”

Miranda nodded her understanding as Mr. Williamson perched his glasses on the end of his nose and picked up a number of papers from his desk. He fiddled with them, dropping most back then began to read. It was a standard will, direct and to the point. The house and all her grandfather’s assets were left unconditionally to Miranda with three exceptions. Mr. Williamson read them through then peered over his glasses.

“So, basically, the three items are the watch your grandfather always wore, the solid gold money clip, and the painting of the early morning sunrise. These all belong to Mr. Iblīs, and because of the death of your grandfather, the items are to be returned to him.”

“Your grandfather was very clear on this. There is no mistake.”

Confused, Miranda’s mind raced, searching for an answer. None of the items were valuable, unless you count the gold in the money clip. Maybe the painting was worth more than she thought. This is weird. Gramps was a very wealthy man and could have afforded millions of each item. Miranda realized Mr. Williamson had spoken and she apologized.

“I asked if you would arrange a suitable time for Mr. Iblīs to collect his property.”

“Yes, but the painting. My grandfather gave it to me when I turned fifteen.”

“I understand, Miranda, but the painting always belonged to Mr. Iblīs. He lent it to your grandfather for his lifetime and your grandfather always understood it would be returned upon his death.”

“I see. Yes, of course, I’ll return it with the other items.” Why on earth would Gramps have borrowed them? It makes no sense. That painting should still be mine. It was a birthday gift.

She glanced at the man sitting next to her. He hadn’t spoken but turned to look at her, the cruel smirk twisted on his lips as if he knew exactly what she’d been thinking. She saw his eyes really were black.

She wanted to take a dislike to him, but there was something about him that made her breathe faster, made her blood race. There was no doubt about it—the man was handsome. In fact, Miranda felt he had no right to be this good-looking, no man did. She guessed he was in his late forties, his black hair slightly long and messy, but it only added to his attractiveness, along with that five-o’clock shadow stubble men seemed to have nowadays. She imagined him naked, doing all those things she’d dreamed of. She had to clamp down on the erotic thoughts that suddenly burst into her mind. Oh, hell, where did they come from? But he’d be the perfect lover—strong, forceful, and demanding. Just imagine him wielding the whip … ah.

Read this book in one sitting as I couldn&#039;t put it down. Great story and characters, dirty just the way I like it ! Highly recommended any book by Suzie.

Never read anything before from this author but I love dark romances. This was fabulous! If you love anti-heroes, bad boys, then you&#039;ll love this. The ultimate bad boy - the devil! This book certainly is not for the faint-hearted. There&#039;s torture, rape, forced seduction, the works but I thought it was fabulous. It certainly would not be everyone&#039;s cup of tea but it was dark and intense for me to thoroughly enjoy. I&#039;ll certainly read more from this author.