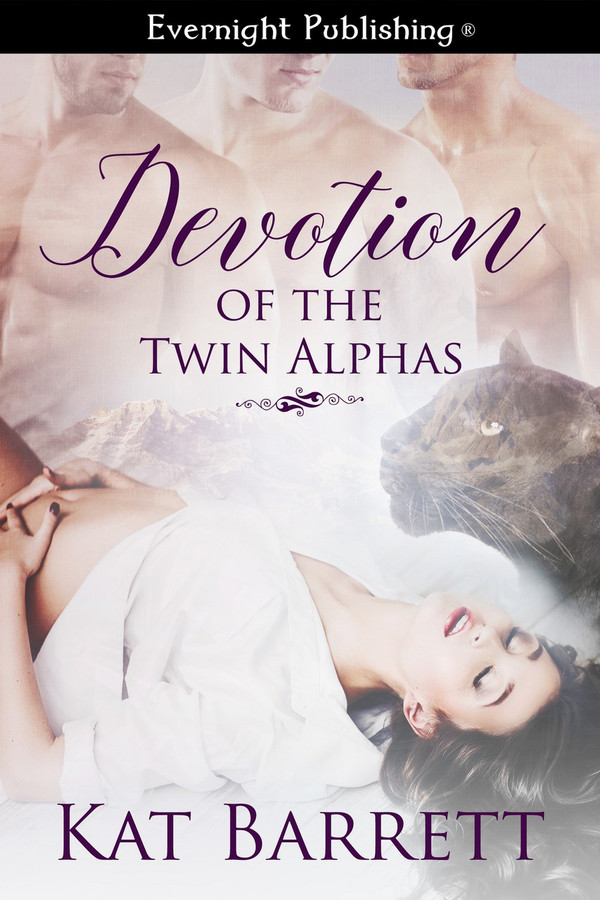 Just after midnight on her twenty-fifth birthday, Royal discovers her entire life has been an arranged lie. She’s not human. She’s something else entirely. To make things worse, she is then kidnapped by the very parents who deserted her as a child and taken to a strange new land. Strange, albeit full of exotic, beautiful men she can’t help but be curious about.

Twin alphas Tavian and Taran have been trained on one very special, intimate mission: they shall hold the honor of becoming Royal’s mates. With no guarantee of her acceptance, the two vow to show her just how wonderful and pleasing their life together could be. Once she arrives, the twins, with help from Macon, a male servant chosen solely to please her, sense her innate attraction to them and do everything they can to help Royal transition.

Unfortunately, things quickly take a dangerous turn. Her birth parents are poisoned and she is called upon to take her place as the ruling Alpha female of the Jaon, a noble kinship of jaguar and lion shifters. It is an honor but also puts her in harm’s way of those who seek to challenge and steal her birthright.

The twins and Macon pledge their loyalty and protection, but when the current alpha male tries to claim Royal for himself, she must fight not only to stay alive, but for the three devoted men she wants. Will Royal survive to embrace this new destiny? Only time will tell.

There was little use in lying to her. She had pegged the truth. He and Tavian had briefly decided on the way to help Royal that if the opportunity and necessity arose, Macon would be the one to fight Ryne. He hadn’t been sure why Tavian had allowed it, but he certainly wasn’t going to say no. For him to take Ryne in a fight meant that his beta status had just been raised to alpha. He hadn’t planned to actually kill Ryne, but the man had given him no choice. It was either kill or be killed.

“Okay, miss smarty pants. What will you do with this information?”

She turned further, curling sideways in his arms. Royal gently stroked his cheek and engaged him in a full, lust filled kiss. He was more than happy to give her what she desired, her tongue twisting like an electric charge around his own. His cock rose hard and fast against the concave of her waist and she leaned back, grinning wickedly.

“I’m going to honor your promise to Tavian. I will give you a secret of mine so we will be even. Do you know what my mother said to me?”

“She told me that my father was a young Beta male who had lost his alpha position because Ryne put a drug in his drink. He was the one meant to be my mother’s mate. She said they had an affair, but she could never quite give herself completely to him because of his status. She now regrets it because it’s too late to set things right. I may be with three men, but it is not a disgrace or a dishonor because they are all noble men who are devoted to me, and I to them. It will also further strengthen the bloodline of Rakey to have three virile men as the father of my children. I think she is right.”

He wasn’t sure if he could actually bear kits or not, but it would be fun to try. Royal turned completely, straddling his legs as she slowly slid down over his cock. Her pussy was stunningly hot and wet and he leaned his head back, groaning with overwhelmed pleasure. He slid his hands over her wet, silky skin and then hesitated, not wanting to chance hurting her.

“I was just worried because you are bruised.”

“I’m fine. Make love to me with no reserves.”

He tightened his hold on her hips, shifting her up and down. Royal offered her nipple to his mouth and he sucked upon it, the flesh sweet and pert. Her moans of enjoyment filled the air, the tight feel of her cunt coercing sensation to flare hotter in his dick. She was amazing, her taut body flexing and rocking to surround him with moving fire. He wanted her as he had never wanted a woman in his life.

There was just something so majestic about her. It was more than her appearance. It was everything about her. Macon had a feeling Royal would be the most powerful leader the tribe had ever known. She would have three men who were so devoted to her they were willing to share her. They would protect her and advise her, each in their own field of expertise.

His cock throbbed even more, her pussy clamping tightly as her nails dug into his shoulders. She cried out, her head thrown back as the muscles in her cunt grabbed and flashed around his flesh. It was intoxicating, the rush of blood filling him as his dick exploded in wave after wave of sensation.

Macon slid his hand up to her face, dragging her back to his mouth. The kiss was softer, less demanding than it had been before, and her body sagged against his.

When it ended, she gave him a sleepy smile. “I think I’m going to like this. I seriously need something to eat to rebuild my strength. I think we should stay inside today and the three of you can show me how much you adore me.”

She was abandoned as a child. Now her parents are back with a story that changes everything. She is not human. Her next birthday will bring a change that she must be prepared for. She returns to the home she was torn from and the mates that were selected to support and protect her. Danger surrounds her in this new world but so does a chance for the love and devotion of the men who would gladly be her mates. Royal was abandoned as a young child. While she wondered why her parents left her, she lived a normal life until those parents suddenly reappear right before her twenty-fifth birthday with an incredible story. They tell her she is not human and is a shifter destined to rule. They also reveal they are not her real parents and her biological parents are very ill. This new world is very beautiful but also frightening. She was sent away to protect her from those who want to be the alpha. The female is the true ruler in this new world. Two brothers, Tavian and Taran, have been selected to be her mates. There is also a servant named Macon who will also serve her needs as desired. Royal has a lot to adjust too but is very smart and open to the future she is facing. I liked that she had confidence in herself but was willing to let others help her with the task. Tavian and Taran are brothers who have been selected by her mother and trained to be Royal&#039;s mates. They have been trained to not only protect her from any danger but to please her sexually. They very much want to be by her side but know it is her choice. The brothers are devoted to meeting her needs and believe it is an honor to be selected for this role. Tavian and Taran know there is real danger surrounding her and will do anything to keep her safe and happy. Some of the story is narrated by them which I liked as it gives me more of an opportunity to connect to the characters. I would have liked to know more about their personalities and their past. I am a big fan of paranormal romances and menage and love when those elements are combined. The author creates an interesting dynamic by having this group lead by the female alpha. I really liked Royal&#039;s mother who was protective of her daughter and kept her secrets to keep her safe. However, there is a very disturbing element to the story. The former male alpha can choose to fight to become the mate of the new alpha even if they are father and daughter. It didn&#039;t seem to fit with the other aspects of leadership. This is a MFM menage but group sex is not a significant part of the story. It seemed to me that it was more that she has multiple male partners. Sometimes in menage romances, you don&#039;t get the opportunity to really differentiate among the male partners expect in terms of their sexual desires. Each brother is given an opportunity to spend time alone with her at first which I think was a good idea on the part of the author. It helps the reader learn more about the brothers as individuals. I would have liked even more opportunities for the characters to get to know each other and build a relationship but there is a tight deadline due to the danger that surrounds them. Some may consider a part of the storylime to be cheating but I would disagree as it is clear that the alpha has the option to have another sexual partner if she chooses. It is a very action oriented story. Everything is accelerated due to it being so close to her birthday and now the possible deaths of her parents that would leave them without leadership. It seems like the parents would have planned for her to be &quot;trained&quot; earlier even with the danger. They cut it very close. It pushes Royal to select her mates and not really have a lot of time to consider any other options. Royal seems to adjust quickly to the physical aspects of being a shifter and has to defend her role. This is a good read for those who enjoy paranormal romances. You get a good mix of romance and action and some menage as well. The story is very action oriented and there is little time to prepare her for her role and make her choices with danger approaching from within the group. I would have liked for there to be more time to develop a relationship among the characters. While the author gives them a little time together, it is hard to believe they have a strong bond in the limited time they have together. The author does deliver a lot of heat in the sex scenes. It is a quick read that that would be even better had the storyline allowed more time for the development of the characters. - See more at: http://erotic.theromancereviews.com/viewbooksreview.php?bookid=23469#sthash.m6BQIo71.dpuf

I enjoy paranormal romances because you can completely step away from reality and magically appear in fantasy land. Devotion of the Twin Alphas is just that…fantasy land. Royal enters a whole new world on her 25th birthday, and her present is not one, not two, but three men who are completely devoted to her and her pleasure. The story is fairly believable (remember, we know we’re in fantasy land) with the exception of some of the supporting characters. I did get a little confused about the role of Trisha, and I had lingering doubts about Royal’s disloyal brother and the twins’ sister, etc. It would have been nice to know what happened to them. There’s a twist near the end that is surprising, and I’m not sure that it was originally part of the plan, but it made for an interesting ending. The book is relatively short at around 100 pages, but it has a happy ending with no cliffhangers. Overall, an entertaining read that turned the heat up more than once.