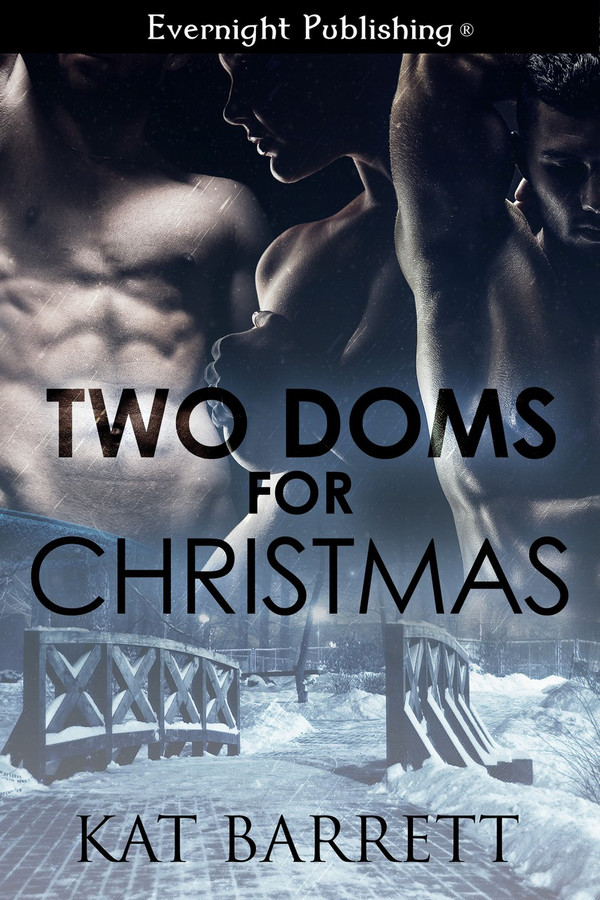 Haley Joy has never recovered from her tragic divorce and the loss of her daughter. She lives a lonely, reclusive life with her dogs Ginger and Sammie. A chance meeting at a bar introduces her to Austin Mckenzie. He’s years younger than her, but they share a similar past and a love for dogs.

Austin also has a secret, he’s a Dom who’s currently looking for a woman to rebuild his life with. He and his best friend Med have shared women before and they hope to do the same again.

Their first date is magic, but then tragedy befalls Haley when a man breaks into her house. The break-in may be the beginning of the end for their budding relationship. It’s Med who sees the truth of their feelings and he plots out a plan to get them back together. Will he succeed so they can be with Haley for Christmas?

The more he got to know Haley, the more he wanted Med to meet her. She was assertive in some ways and docile in others. If he pushed her, she backed off. The woman was certainly submissive and that could prove to be a very good point. As he backed out of the driveway, he had a sudden urge to know more about her sexual preferences. “Now that we are in a neutral situation, can I ask how you enjoyed the kiss?”

She frowned, just as he had expected. His timing for the question was horrible, but this time he had done it on purpose. She wasn’t in a situation to occupy herself, as she had done adding the final touches to the meal. She couldn’t walk away, unless she wanted to get out with mountains of snow on her side of the truck.

“I enjoyed it. It was slightly demanding, but very nice.”

That was a good answer and had breached the subject perfectly. He wanted to ease into it with her. “Did you enjoy me holding you hair or was it too rough?”

She looked at him and shrugged, her eyes turning away. “I guess I didn’t mind.”

“Do you ever fantasize about being tied up or having a man tell you what he wants done in detail?”

This time she didn’t look at him. He could see her analyzing the question, and then she shifted her hips as if slightly uncomfortable. “I suppose. Why are you asking?”

“Because I would love nothing better than to give you the experience. How adventurous are you, Haley Joy?” It was blunt and to the point, but could be taken in many ways. It also had many replies, but a limited amount that would thrill him.

“I suppose that depends on your idea of adventure.”

“I was specifically asking about sexually. Is it strictly missionary style with no room for expansion? Have you tried other positions, or maybe games?”

“I have tried other positions. Back when we first got married, Jack and I played games. That changed over the years, but…”

“So what was your favorite game?”

“He liked it when I dressed up as a doll or maybe a French maid. He bought me quite a few costumes. Each costume had its own game to go with it.”

Now she was being vague. Had she not enjoyed it, or was she too shy to discuss it? “That sounds extremely interesting. What was your favorite one?”

In his peripheral vision, he could see her face darkening with color. The woman was blushing. No shit. He stopped for the light and spun to face her. “Oh, you have to tell me. I know just from your reaction that this is going to be good. What did you dress up as and what did he do?”

She scrunched her lips into a very childish expression of embarrassment and looked away from him.

“Yeah, because you asked. I didn’t realize I was going to have to go into detail.”

Throwing his head back dramatically, he groaned and then faced the light. He wanted to see if his drama and then silence would prompt her to speak. Was he going to have to pry it out of her? He wanted to know, needed to know what she had found so intimating.

Was it simply the act, the dressing up, or had more gone on? Maybe it was just talking about it. Some women were bolder in bed than they were speaking about it afterwards. He had to get her to tell him. If he had to push her a bit to reply, he would. But it would be so much better if she simply answered him.

The light turned and he went through it. They would be back at her house in a few minutes and then she would be distracted with the dogs and getting them dinner. He wanted her to talk in an atmosphere where she couldn’t avoid him. “Please…” He drew the word out to make it sound as if he was begging. He would never beg.

She took a deep breath as if bracing herself to speak. “He dressed me up like a doll, or more aptly a puppet. I put heavy pink circles of blush on my cheeks and wore this frilly skirt with crotchless panties and a little button down shirt. He made this stupid X thing out of wood and hung it on the ceiling by a heavy metal clip and then tied my ankles and wrists to it before stringing another line directly through the clip and tying it around my waist. He could tug on the ropes to make my arms move how he wanted. He could also control my up and down movement with the one around my waist. Then he lay on the bed and made me fuck him while he controlled my movements with the ropes.”

“Why do you look so forlorn while you are describing it? Didn’t you enjoy it?”

“In a way I did, but I ended up with rope burn and it was really painful. Somehow that stayed in my mind more than the actual sex.”

That made sense. Pain could inflict many reactions from extreme orgasm to sobbing escapism. To leave angry, burned marks behind was a stupid mistake that could leave lasting damage on the mind. “That’s an amateur mistake that shouldn’t happen. The right rope has to be tied correctly to restrain, but also protect the body part from injury. We prefer cloth or leather.” He let the sentence hang as he pulled onto her street. The road was surprisingly well paved with plenty of sand to give good traction.

Haley was staring at him and he figured he had given her just enough to make her curious without revealing too much. He wanted to have sex with her first before they took the conversation any further.

First, a big shout out to cover artist, Jay Aheer. She comes up with some absolutely amazing covers! &quot;Two Doms at Christmas&quot; is a holiday read from the immensely talented Kat Barrett. I’ve been reading her books for quite a long while, and I’ve always enjoyed them. This book is no different. Haley Joy is a writer who manages to get caught saying some pretty kinky things into her phone.To make things worse, she’s caught by Austin McKenzie. He sees she has no wedding ring on and decides to strike up a conversation with her. After they both figure out that they have similar things in common, they decide to spend more time together. She eventually finds out that not only is Austin a Dom, but he shares with his best friend Med. But when an attacker breaks into his home and hurts Haley’s dog, the dog later has a problem they never saw coming. An overreaction and misunderstandings could be just the thing to break them up. For good. This was a wonderful book, with lots of lovely D/s sex. The Doms have different kinks, including pony play and paddling, which Haley accommodates equally. I will say I was really disappointed in Austin’s reaction to the episode with the dog. I wasn’t thrilled with how he behaved towards Haley, otherwise, I just loved it!