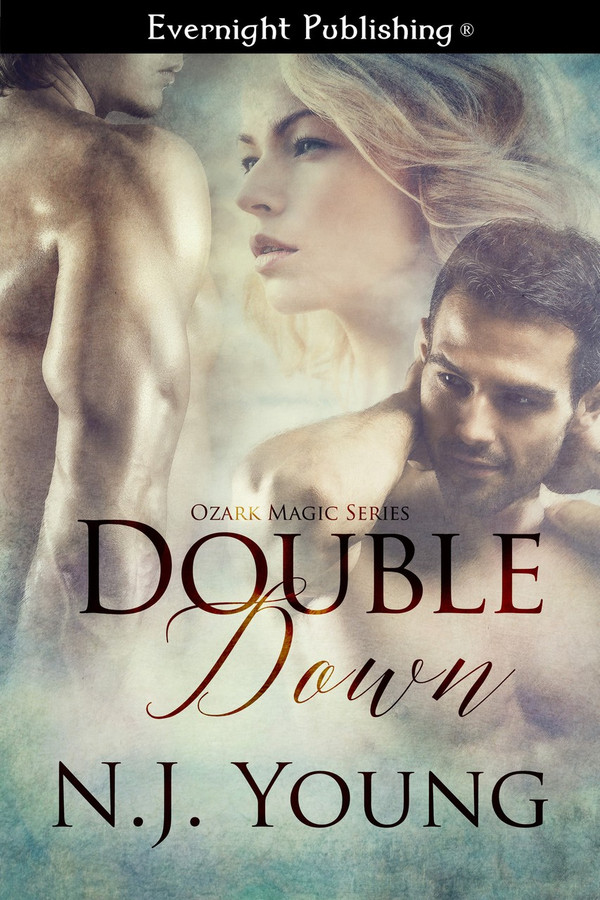 Izzy Craig might live in a town called Magic, but her life is anything but. After nursing her beloved grandfather, he has passed away, leaving her to manage a busy lake resort and an unrequited crush on the town’s sheriff, Graham Nolan. Things start to look up when Graham’s estranged brother Chris comes to town. If she can’t have one handsome Nolan man, maybe his twin will do.

Graham’s feelings for Izzy have always been complicated . . . and intense. When he realizes that his brother has encroached on his territory, he’s not sure if he can deal. They’ve tried sharing a woman before, and that ended in heartache for everyone. But when Izzy’s sketchy uncle enters the picture, Graham’s cop senses go on high alert. He may very well have to trust his brother, Izzy, and himself, if he wants to keep the woman he loves safe.

Her soft lips pressed against his mouth, causing Graham’s eyes to widen in surprise. He’d sensed her unease, so her sudden aggressiveness took him aback for a moment. She wanted them? Was that what she was saying with this kiss?

Stepping forward, Izzy pressed her body against his and he groaned at the feel of her firm breasts pressed against his chest. When her tongue hesitantly probed through his parted lips, he would have lost control if it weren’t for Chris standing behind her dramatically clearing his throat.

Grasping her shoulders, it took every ounce of strength in Graham to push Izzy away and plant her back on her feet. Her lips were slightly swollen, and her blue eyes had darkened. Before he could catch his breath to speak, a stunned look crossed her pretty face.

“I – I’m sorry. You said this wasn’t the right time. Obviously you don’t want to – I – I shouldn’t have. . .” She trailed off, trying to step away, but both of them reached for her at the same time. Dammit, he hadn’t meant to upset her.

Looking to his brother for help, Graham was relieved when Chris leaned into Izzy without hesitation, easing her worry.

“You have to tell us, baby,” Chris murmured against her ear. “Trust me, we want nothing more than to kiss your pretty lips until your head swims, but you have to tell us what you want first.”

“I don’t want to guess wrong,” Graham agreed, reaching for her hand and entwining his fingers with hers. “It would be easy for us to just take you, toss you on the bed, make you come over and over.” He stepped closer to her as her eyes started to glaze at that statement. “And maybe that’s what you want. Us taking you without you having to actually make the decision.” He brushed her swollen lips with the pad of his finger. “But it doesn’t work that way, sweetheart. You have to tell us what you want.”

“But – but – I thought you liked to dominate.” Damn, that low, breathy voice did things to him.

He had to bite back a groan. The thought of dominating Izzy, tying her up, spanking that pretty round ass caused him to harden to the point of pain. “Baby, I need to know that you want us – together – as much as we want you. We need your consent, Iz. And once you do consent, you should know that we won’t go easy on you.”

Her jaw dropped open a bit as her eyes dilated, and Graham grinned as she tried to figure out what he meant. Behind her, Chris gave him a sly smile.

“I – I —” she stammered, and then bit her lip and took a shaky breath.

“Deep breath, sweetheart,” Chris crooned, his lips finding her ear again. Graham shot him a warning look. If he didn’t quit kissing her, she wasn’t going to be able to form a thought, much less words.

“I – I want you.” Her breathy voice was barely audible, and he stepped close enough to press himself against her, sandwiching her in between himself and Chris.

Taking another long shaky breath, she tried again. “I want both of you – to – to make love to me.” The way her milky skin flushed led Graham to believe that she’d never actually said that to a man before, never asked for what she wanted.

Her words empowered him. She wanted them. She was theirs. He leaned forward to take her lips, cupping her face in his large hands so he could tilt her head how he wanted. His tongue traced the line of her lips until they parted, allowing him access. He swallowed her light whimper as his tongue delved deeper. And she kissed him back. Oh how she kissed him back. When her hands clutched at his arms, he eased back, gently nipping her bottom lip.

“Chris,” Graham spoke to his brother without looking away from Izzy. “Undress her. I want her naked.”

Her breath caught in her throat, and she jerked her head back to look at Chris who smiled wickedly. “With pleasure.”

As Graham backed up to allow his brother room, Chris walked around to stand in front of Izzy. He jokingly rolled his eyes at Graham. “He can be a little bossy,” he said to her with a wink.

Graham watched as his brother ran his hands lightly down her arms, before lifting her arms over her head. He quickly stripped off her black blouse before tugging off the khaki pants she wore.

When Chris stepped back, he darted a glance at his twin, and Graham could see that his eyes were as molten as he felt inside.

Izzy stood before both of them in only her black bra and panties, looking from one man to the other as their steel gazes swept up and down her body, ravenously consuming every inch of her. When a shiver went through her, Graham reached out to envelop her in his arms. “Are we making you nervous, sweetheart?”

She shook her head, a little smile playing at her mouth.

Chris reached out, needing to touch her, and Graham passed her off to his brother. “Are you sure? I know we can be a little overwhelming.”

“What, baby? What’s wrong?” Graham asked. When her gaze slid away, he lifted her chin up. “Look at me, Iz. What’s wrong? You need to be honest with us or I will smack that pretty ass right now.”

The brief flaring of her eyes told Graham she would enjoy a spanking, his hand pounding her ass. Now, there was some fun they could have later.

Izzy Craig’s life is anything but magical, her grandfather passed away leaving her to manage a busy lake resort and an unrequited crush on the town’s sheriff but things start are starting to look up when Chris comes to town in this riveting romantic suspense. Graham’s not sure if he can deal with his twin brother encroaching on his territory but when Izzy’s sketchy uncle enters the picture, he will have to trust his brother, Izzy and himself if he wants to keep the woman he loves safe and the reader can’t help but get pulled into this turbulent romantic triangle as the intense emotional distress flows from the pages and grips the heart while the intense chemistry between Izzy and each of the two men sizzles from every page. The sex scenes are scorching hot but the relationship is poised to fall off a cliff at any moment throughout the story which keeps anticipation building throughout as these strong compelling characters struggle to find their way through their emotional issues in this steady to fast paced and smooth flowing plot that thrills readers with lots of suspense, excitement, turmoil and passion. Adrenaline pumping excitement builds as Izzy finds herself under attack and everyone scrambles to find a motive and the culprit behind the attacks which of course adds to the pressures and emotional turmoil this threesome is facing. The past interferes in the relationship and some unexpected twists keeps everyone on their toes both in the relationship and the investigation. The scenes are well written and provides great details that make it easy for the reader to picture every scene as it happens while the intriguing events draw the reader in and keeps them glued to the pages. Double Down held me spellbound while Graham, Izzy and Chris captured my heart a little more with every turn of the page. The story had a great mix of suspense and personal conflict along with the erotic side of the romance and there were quite a few characters that has caught my attention so I can’t wait to read the next book.

Izzy is in love with town sheriff Graham but he’s always keeping his distance. So one night, he starts flirting with her and she takes him up on his offer to get a room...only it’s not Graham removing her clothes. That would be his twin brother, Chris. And as that heats up, danger is lurking around the corner... Oh my God, this book has so much potential. There are excellent characters and a great plot plus fantastic sex. The big problem is too many characters pov’s. It is hard keeping each character and their history straight. One scene has three or four jumps, I kept getting whiplash! However, I absolutely love the twist with the identical twins, Graham and Chris. The suspense aspect of the story is really well done. There is even some humor thrown in there that made me laugh. I thoroughly enjoyed this story. I’m looking forward to reading more from NJ Young.

WOW! What a book! Once I started reading, I could not stop. From a debut author, this is some of the best writing I&#039;ve read in a very long time. The characters were believable, the pace was fast, and the ending... not a chance, but it was unexpected. And, holy sex scenes! Can I say that here? Unlike other books, the sex scenes in Double Down were not over before they got started. The scenes are vivid, detailed moment-to-moment accounts that come to life (so don&#039;t read while at work or on public transportation).This is not porn, this is prose with a temperature gauge set to hot! Author N.J. Young has managed to produce a compelling story that builds to something more than just sex. Highly recommended!

Excellent first book in a new series by an excellent up and coming author! I loved everything about this book except that it had to end. It was very well written. I loved the plot. I fell in love with the characters. This is not your everyday girl meets boy romance. It was hot, hot, hot! Fair warning you may not want to read this one at work! I can&#039;t wait to read more about the people of Magic in the next book of the series. This was a stand alone book. No cliff hangers thank you very much. Totally worth the money. Do yourself a favor and give Ms. Young a shot. You won&#039;t be sorry!