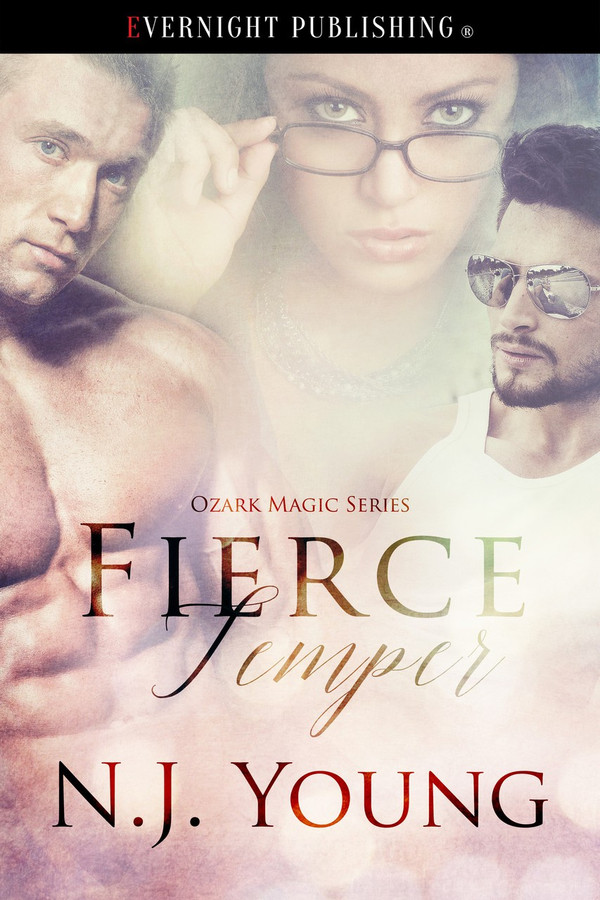 Tessa Lawson has a secret…actually, she has a few. Not only did she used to be known as adult film star Temper Jazz, but she is also on the run after witnessing a murder and stealing $250K from a drug lord. She moved to Magic to hide, but will she be able to hide her heart?

Milo Livingston has his own demons. His guilt over a horrible accident that injured a friend has left him thinking he doesn’t deserve happiness. He surely doesn’t think that Tessa could ever love him. When Milo’s friend, DEA Agent Archer Collins comes to town, the trio’s world is thrown into upheaval. Archer is intent on bringing down the drug cartel responsible for his sister’s death. He never expected to fall in love with Tessa, the key witness he’s been searching for.

After an attempt is made on Tessa’s life, Milo and Archer join forces to protect the woman they care about. Will both men be able to overcome their own demons and trust Tessa with their hearts? And will their love be enough to protect her from the dangerous people who want her dead?

Damn, this boy can kiss. A fog of desire filled Tessa’s brain as Archer’s tongue explored her mouth. It was different from how he’d kissed her before. It was raw, honest, as if he was offering himself up to her.

A happy sigh escaped her as Archer pulled away. She started to turn to Milo to kiss him in turn, but Archer scooped her up in his arms and walked toward the stairs.

“What are you doing?” she asked as Milo followed them.

“Pet, we have taken you on pretty much every surface in this house, but for some reason, we rarely end up in the bedroom,” Milo answered. “I don’t want you to be uncomfortable right now. You’re hurt.”

“I’m not hurt.” Her lower lip jutted out in a dramatic pout. He was right how they had christened every room, though. The California King bed that currently dominated the master bedroom still proved to be a little small when they really started getting creative. It was good for sleeping, though. She’d never slept better in her life than she did when she was cuddled in between the two of them.

“I don’t mind being in other rooms in the house. The rug in the study is nice and fluffy. It’s much easier on my knees than the rug in the great room,” she mused.

A chuckle rumbled in Archer’s chest as he reached the top of the stairs. The way he could carry her all over without even breathing hard was downright impressive.

“You’ve had a rough day, baby.” His kiss landed on the top of her head. “We won’t make you get on your knees.”

“What? You don’t understand. I have to be on my knees for what I have planned.”

They reached the bedroom, and Archer sat her on the edge of the bed, stepping back to stand in front of her. Milo stood next to him, and both men crossed their arms over their chests, looking like gorgeous gods. The only thing that would make them even sexier is if they would take their damn clothes off. And if they would get rid of those disapproving frowns. What was that about?

“What exactly do you mean what you have planned?” The dark tone of Milo’s voice sent a thrill through her. All it took was him using his Dom voice to make her melt.

“Is that how this works, baby?” Archer stared down at her, his hooded eyes darkening to that rich caramel color.

Well, hell. She hadn’t really been thinking about rules when she’d made her plan. “Well, I … um, no … Masters.” They both stepped closer, and she felt her breath quicken. Her face was even with the large bulge in Milo’s jeans, and she had to bite her lip as her mouth started to water. Archer’s cock also looked to be noticeably straining against his jeans.

Milo’s large hand was surprisingly gentle when he reached out to stroke her cheek with the backs of his knuckles. She reached out automatically, and Archer took her hand. It seemed as though she didn’t feel complete unless she was touching both of them.

“You tend to get your way outside of the bedroom.” Milo threaded his fingers through her hair. “But in the bedroom, we make the rules.”

Tessa raised her eyes to meet his. “In the bedroom, on the kitchen counter, on the rug in front of the fireplace. Humph. That hardly seems fair.” The words were out of her mouth before she’d really even thought about it. She immediately regretted it when Milo’s thick fingers clenched in her hair. The quick bite of pain made her gasp, even as she felt the heat grow between her legs.

“I think that’s enough backtalk, pet. Over my knee.”

Fierce Temper is book two in the Ozark Magic series by N.J. Young. This story can easily be read as a stand alone but it will most definitely leave you wanting to read the first book in the series. Fierce Temper is a sexy, intriguing, menage love story between two dominant males and one submissive female. As the story begins Tessa has run away from some terrible men and settled down in the town of Magic, where Milo also happens to live. She owns and operates the media center library. Archer comes to town, not only to see his good friend Milo, but also looking for Tessa to warn her that the men she fled will find her. When the hunters do arrive in town it&#039;s up to Milo and Archer to keep Tessa safe. In so doing the three of them enjoy giving into, and exploring, the passion they have together. I must say N.J. Young writes the local and it&#039;s characters in a way that really brings them to life. With eroticism that is off the page hot! I found myself desperately wanting to take a weekend getaway to Magic. An advanced reader copy of Fierce Temper was provided to Kimmers’ Erotic Book Banter, by N.J. Young, in exchange for our fair and honest opinion.

Given ARC in return for an unpaid, honest review. I seriously have to thank N.J. Young. This is my type of book. The reason I started blogging in the first place, on top of reviewing. The whole BDSM, girl meet kinky Dom or Doms, I&#039;m not picky that way. And throw in some meaty suspense and drama to keep me revved up on top of all that delicious kink? Yup, my Raison D&#039;être, my happy place. I think you get it. Fierce Temper is the second book in the Ozark Magic series, and in this book, we get the story of Temperance, or as readers may know her from book one, Tessa. Tessa was Izzy&#039;s friend who was shot in book one when Izzy was taken. (I still have to read that whole book, and believe you me, I&#039;m going right back to do it!) Anywho... About a year ago, Tessa was Temper Jazz, an adult film star forced into the business thanks to her mother stealing her identity and racking up some serious debit. She leaves the building after a nasty scene, and finds herself having to return to get her car keys. She unfortunately witnesses something she shouldn&#039;t, then has to run, taking something that doesn&#039;t belong to her. A year later sees her happily ensconced in the town of Magic, her media library doing well, as well as the erotic book club with her friends she has going. The local bartender, Milo has a serious crush on her, but she keeps her distance. When Archer, a man from her porn days shows up, she runs, figuring he&#039;s there to kill her. After a nasty accident, she finds out Archer isn&#039;t who she thought he was, and that he&#039;s really friends with Milo. She then has her past crush and her current crush together and the sparks ignite. But they all find out that the drug cartel is serious about wanting her dead. The game is afoot! Join in for some seriously hot sex, crazy suspense, and some inventive name calling that I have actually myself used. (though, I wrote some down, because seriously, some of them were badas*) I positively loved this book, love this series, and can&#039;t wait to see whose book comes next. Though I have a pretty good idea it will be Andi, Theo, and Flynn. At least, I hope so.

This book is the 2nd in the Ozark Magic Series, set in the small and cozy town of Magic, which is located in the Missouri Ozarks. In the first book, &quot;Double Down&quot; Young introduces the characters for Fierce Temper. Although, you may have a feeling while reading &quot;Double Down&quot; about which characters have chemistry, you do not have to read &quot;Double Down&quot; to enjoy &quot;Fierce Temper&quot;. &quot;Fierce Temper&quot; contains, love, romance, mystery and suspense. It is in the erotic romance category, thereby containing some steamy scenes which were very well written. In fact, the whole book flows nicely and is well written. The storyline: Tessa has been hiding out from her past in the town of Magic for some time, when that past catches up with her and brings two men, Milo and Archer to her side. The book contains a cool twist which I won&#039;t reveal here. Enjoy! You will love it.