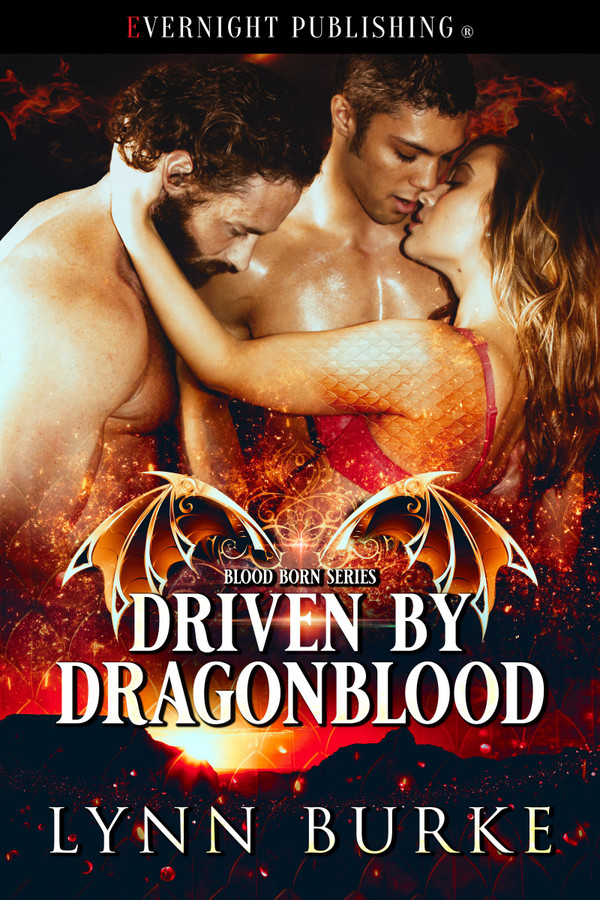 More dragonblood than human, Primrose Cadet yearns to find her fated mates and ease the loneliness of her secluded life. But with her beta behind psychiatric bars and their alpha denying his beastly nature—and hers—she’ll have to fight for them, even if it means exposing her heritage.

A manipulative voice in his head promising he can fly landed Jaxon Denham in the psych ward. Now eighteen and legally allowed to finally leave his parents’ enforced prison, he searches out the golden goddess of his dreams, the one that the voice within claims will give them the release they crave.

Doctor Patrick Macaire has fought his inner darkness for thirty-four years, living a life of self-control and discipline to prove his sanity. When a barely legal boy and a seductive siren threaten the foundation of his calm existence, he’s driven to battle the voice inside and remain untouched.

But fate is clever, and Patrick’s relentless mates won’t allow him peace, catching him up in unhuman-like passion that threatens his self-identity. Will he accept he’s an alpha dragonblood, born to dominate his mates, or will his human side keep the three from fulfilling their destiny?

The second night I’d stood cloaked outside Lockwood’s eastern wing, the need to be impulsive, something I’d never dealt with before, fought my better judgment. Regardless of my beta’s mental state, I had wanted to sneak into his room and allow him to have his way with me, claim me like my inner dragon longed for.

Luckily, my ancestors had kept informative records in the cavern’s library of my sheltered upbringing, so I understood all the possible sexual positions—and means of giving pain for pleasure—as most alpha blood born were known for. Unfortunately, I had no personal knowledge of such things, and my dragon was determined to undermine my will to wait for his freedom.

My fingers ached from grasping the chain-link fence to keep my human form in place. The energy linking me to the window strengthened and pulled taut as a shadow moved into view. Even with my dragon sight, I couldn’t make out the color of his hair or eyes, but as he turned his head side to side as though seeking out where the energy attaching us came from, I took note of a strong nose and full lips, a square jaw I wanted to lick and nip with my teeth as he thrust into me.

Arousal, hot and wet, rose between my thighs, same as the previous night, and I bit my lips, my dragon’s needy growl rumbling in my chest as my beta locked his gaze on where I stood, cloaked by a dragonblood gift and darkness.

My human form wanted, too, and I swallowed as my dragon attempted to take over in a burst of golden light I quickly squashed. “Soon,” I promised with a whisper.

Through the tall, barred windows, I realized my beta’s hand moved over his body, the heat in the energy linking us rising. Did he touch himself? He propped his forehead on the window, shoulder hunched as though in pain, and again, I fought the need to shift, tear through the fence and walls to free my beta mate.

His form stiffened, and head tipped back, and the most luscious race of tingles swept through me, settling in my core.

Lower lip between my teeth, I released one hand from its hold and slid my fingertips down over the front of my leggings where I throbbed. I gasped as the feather touch grazed the hardened nub at the top of my slit, and I rubbed back up over it, my hips bucking on their own as though he thrust into me, burying against my womb.

Heat exploded like a blinding light through the energy between us, capturing my human form and my inner dragon in a euphoric race to the stars. I cried out, unable to keep my lips sealed as wave after wave rippled through my body, pulsing my pussy where his hard length ought to be.

My dragon whimpered with the need for more, for our beta’s physical touch, but I tore myself away from the fence and focused on the motel’s room where I would plan my silent, cloaked assault on the mental hospital where one of my mates remained locked inside.

I would free him come morning—or die trying to.

This is book 3 of the series, Blood Born by Lynn Burke. This is not your typical dragon shifter story!! Ms Burke is so very good at wielding the story all around and including all around you too!! Her characters are so well done,you feel like you’ve known them a long time. Primrose has dragon blood in her veins. Up to now she has lead a very secluded life. She has used her time to read all about not only her dragon but of knowledge about her dragon shifting family of the past. There is a change in her living arrangements and she also realizes that she is so very lonesome so she decides it’s time for her to go and find her fated mates, yes mates,plural. She finds things to be much harder to manage out in the big world but luck is on her side and she finds her mates. Jaxon , who she her beta, is in a hospital for the mentally challenged. The voice in his head is always getting him in trouble,telling him he can fly. He tries his best to not listen to his dragons voice in his head. She also finds Patrick, her alpha, but he does not listen to his dragon voice in his head either. Patrick goes so far as becoming a doctor of psychology as to learn how to quiet and control his voice in his head. Muddying the waters further,Jaxon was a patient of Dr. Patrick’s and it would not be good,not at all if that got out. It could ruin his reputation he so carefully had constructed. Primrose has her work cut out for her. The question is can she convince them of their fate not only as her mates to her but to each other as well. It is a great read, pure and simple. Though I believe this can be a stand alone it had inhanced the overall story to have read book 1 and 2. I adore Ms. Lynn’s dragons and after reading this or all three books I believe you will too!! It is so worth your hard earned money and your precious time!!! Enjoy!!

Drawn by Dragonblood by Lynn Burke