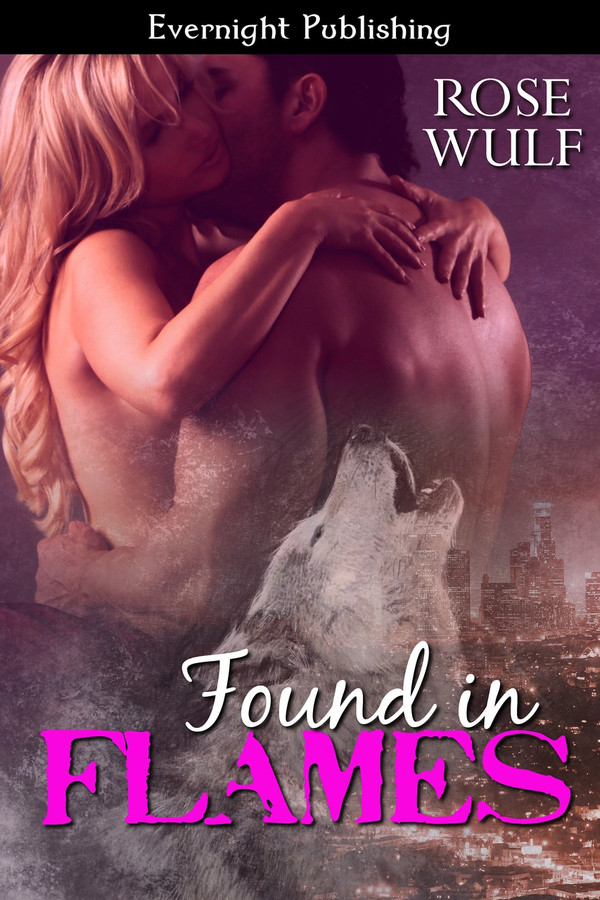 All his life Luka Craige has been haunted by the one that killed his family. Finally, having chased him across the country to the edge of vampire territory, Luka has his chance at vengeance—but not before his Beta is killed and Luka finds himself protecting a woman he doesn’t know. A woman who arouses him like never before. Could he possibly exact his revenge and find his mate?

A burning body was the last thing Joella Harp expected to find when she rounded the corner. Let alone a body with a man standing over it. After that her droll life becomes a whirlwind of werewolves, wild sex, and deadly fire. Someone wants her dead, she can barely think past her mouthwatering rescuer, and in no time she realizes this adventure could be more than a fantastical memory...if she’s brave enough.

The words did nothing to make Joella feel better. She knew in her gut that any help the operator could send would arrive too late.

The man turned to face her properly and his lips started moving. Either he wasn’t giving his words voice or her ears had stopped working, because Joella had no idea what he was saying. Whatever it was, though, she was sure it was bad for her. His arm lifted again and she saw that same orange-red flicker of light—coming from his palm. It was much brighter up close. And much warmer. Like fire….

Suddenly something strong and heavy crashed into her, locking around her waist and throwing her bodily to the side. Her phone went flying somewhere in the direction of the dangerous man, and she was already rolling, slamming hard onto a firm surface that was decidedly not asphalt. Heat immediately exploded above and behind her in a bright, but brief, flash of light and she instinctively turned her face down—effectively burrowing into whoever or whatever had just tackled her.

The heat vanished almost as quickly, as if it had been sucked from the very air, and Joella found she could breathe a little easier. Unfortunately, that also enabled her to think a little clearer, too. Slowly, cautiously, she lifted her head and found herself tucked beneath a stranger’s jaw. A very muscular stranger’s jaw, if the broad shoulders she could see and the hard chest she was pressed against were any indication. She couldn’t remember the last time she’d been this close to a man….

The harsh, masculine growl of anger jerked her back to reality and Joella had the strongest urge to smack her own forehead. Really, Ella? As if he could hear her thoughts, the mystery man promptly rolled her off him and pushed to his feet without a word. Not sure of what else she should do, Joella adjusted herself and reached to gather her purse, and the wallet that had fallen out, when she registered what her companion was doing.

He was kneeling beside the charred body of the man she’d heard scream.

Wait, where’d the other guy go? Her head snapped up, first toward the large nameless man who seemed to have punched the ground near the charred body, and then around until she was looking out the alley. The other man, the one who’d attacked her, was nowhere to be seen. But … how —?

“Let’s go,” her rescuer said as his strong hand clamped around her elbow and hauled her effortlessly to her feet. Which was just impossible, because Joella was the first to admit that she was overweight. No one could lift her 230 pounds off the ground with one hand.

Then again…. The other guy, who might have vanished into thin air, had also seemingly shot fire from just one hand. Maybe she didn’t know as much as she thought she knew. Except she was pretty sure she really was being half-dragged toward the blackened, still smoking body, and she wasn’t okay with that.

“Hey,” she finally said, looking down to find he hadn’t released her elbow. “What are you doing? Let me go!”

“We can’t stay here.” He didn’t slow down. She was parallel with the body now and she crinkled her nose in an effort to escape the stench. If she’d had the time she might even have thrown up. If nothing else, she would surely be emptying her stomach later, once she had time to process everything. Whatever ‘everything’ turned out to be….

What if this guy’s a killer, too?

She forced her eyes away from the corpse, toward her rescuer-turned-kidnapper and demanded, “Excuse me?” Only now were her ears registering the screaming sirens that neared with each passing moment. But that was a good thing! Unless he really was dangerous. In which case, she didn’t want to go anywhere with him.

But he ignored her, coming to a stop a couple of feet away from the fence at the back of the alley and looked up. Like he was thinking about climbing it, even though it had curled barbed wire across the top. Joella opened her mouth to ask again what he was thinking, but before she could do more than take the necessary breath, she was hanging over one of his broad, muscular shoulders and they were airborne.

Luka was determined to find the witch that ruined his life. Joella witnessed something that blew her mind and when she gets whisked away, will she look upon Luka as her savior or his captive? Luka Craige is a wolf who is helping to save his pack and is hell bent for revenge. Bound by territory, he was determined to end things with the killer once and for all. With Joella Harp in his way, it may slow him down but it definitely won’t stop him from doing what he must do to make things right. Joella was in the wrong place at the wrong time, trying to help but finding herself in the thick of what seems to be a long time feud. Set in Las Vegas, the City of Sin, I think it’s a perfect setting for these two lost souls who eventually meet each other in such an unpredictable way. Luka has a strong charm and irresistible body while Joella resonates strength though her fiery personality. What I like about the story is that it starts with the beginning of each of the characters’ lives so the reader gets a taste of them before the initial meeting. The way they met was great and unpredictable. I like Luka’s humour when he’s bouncing around the city with Joella. It makes you wonder if they would ever get along but circumstances happen that show the best part of themselves and the heat between them starts to climax. Their relationship is heartfelt but very sexy once they get into each other’s arms and the sparks begin to fly