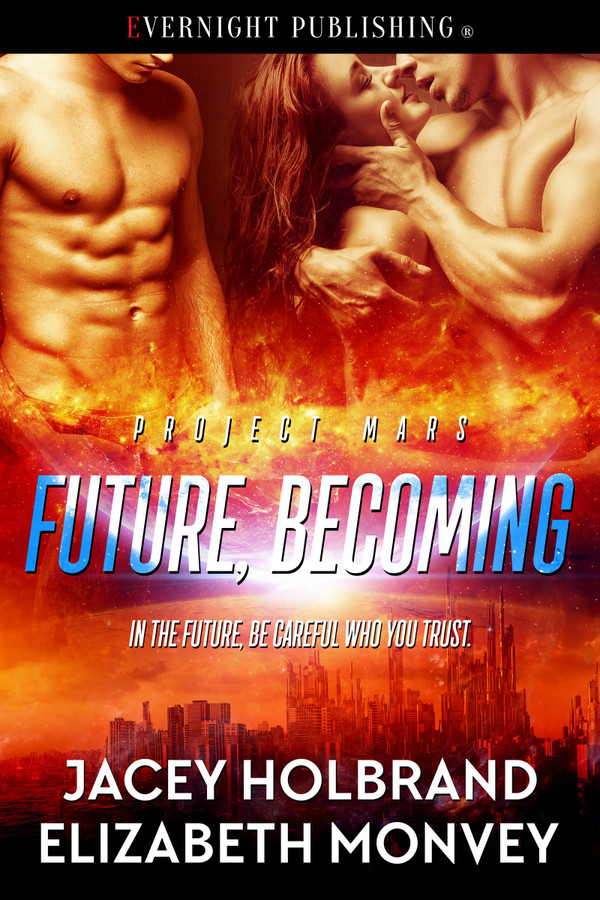 In the future, be careful who you trust…

When Victor Peight learns his twin sister is being held against her will in a Sector “farm,” he vows to move heaven and hell to find her. During the daring rescue, he meets Meagan Hughes and Quinn Doyle, and they quickly form a deep friendship.

As he leads the small troop of survivors through the Colorado wilderness, they try to stay one step ahead of the evil members from Sector. If they’re caught, they will all face harsh punishments. With their lives on the line, their only hope is reaching the resistance in Las Vegas.

Banded together on a common quest, Meagan, Quinn, and Victor’s friendship turns into something more, and their bond is tested when not only Meagan finds herself pregnant, but Quinn does as well.

Vic hunched down in the tree line, using the tall grass to hide in as he watched the ranch Ira had instructed them to visit. Log-cabin-type home. Nice, covered wraparound porch with a couple of rockers. A large fenced-off area behind showed several horses grazing, tails flipping around as they enjoyed the warm sunshine.

Grinding his teeth together, he clutched at the ground, cursing the circumstances that had him squatting in the dirt instead of sipping a cool drink on his own porch. He’d always envisioned having the type of home Cole had, but with the resistance and Sector at odds, Vic doubted his dream of owning a homestead would ever come true. Needing to concentrate on making sure no Sector troops were hanging around, he took a deep breath and shelved the envy coursing through him.

Some dryer stalks rustled behind him, and all his senses came alive. Ready to spring into action and fight if need be, he calmed instantly when Quinn knelt beside him, distracting him from his observation by lightly brushing against him. Glancing at the man out of the corner of his eye, Vic savored the tingling sensation running up his arm.

“Are we going to go in?” Quinn asked.

Vic turned his head to address the question. No space seemed to separate them. So very close. His heart skipped a beat at Quinn’s nearness. Too close? his mind wondered. No, both his heart and head answered as an overwhelming urge to kiss the man gripped him.

Would Quinn accept my advance or punch me in the face?

Instead of acting on his impulse, he answered. “Me,” he said in a husky tone. “Not we.”

Quinn glanced at his lips, licked his own, then looked back up. “Vic.”

His name came out breathy, like a caress. Every instinct Vic had wanted Quinn to give him a signal, to lean closer. As he breathed in the other man’s scent, reminding him of the mountain stream and pine trees near the farm, desire hit him hard, but a sliver of sanity prevailed.

Then Quinn moved his face forward … in his direction.

“Why not?” Quinn asked in a silky, yet challenging tone.

“We shouldn’t.” Despite his words, he shifted toward Quinn.

Vic bobbed his head once, silently agreeing with his statement. “What about Meagan?”

“What about us right now? I know you feel the pull. Our chemistry.”

Vic wanted to ignore Quinn’s question and deny his claim, because it was neither the time nor the place, but he couldn’t. A definite attraction existed between them. He sighed. “Oh, Quinn.”

He couldn’t ignore the plea or his own desire. Cupping Quinn’s face, he brushed his thumb over his lips, giving him enough time to pull away if he wanted. Quinn didn’t move. Their mouths met, featherlike at first, until Vic didn’t have the strength to fight the sexual desire blazing between them. He wanted to extinguish the yearning, tame the flames of attraction so he could concentrate on getting them all safely back to Las Vegas. But a small voice taunted him.

Okay, he thought, just one to slake his thirst for an intimacy he hadn’t experienced in a while. Wrapping his hand around the back of Quinn’s neck, he deepened the kiss. Molding their lips together perfectly. A fire ignited in his blood, burning through him. As their tongues swirled together, the caressing shock waves tore through his soul, altering all he thought he knew about simple lust.

One’s not enough. How can I possibly let him go now?

The thought made him gasp for air. Vic broke the kiss and stared deep into Quinn’s eyes, amazed to see his own arousal mirrored in the sky-blue depths.