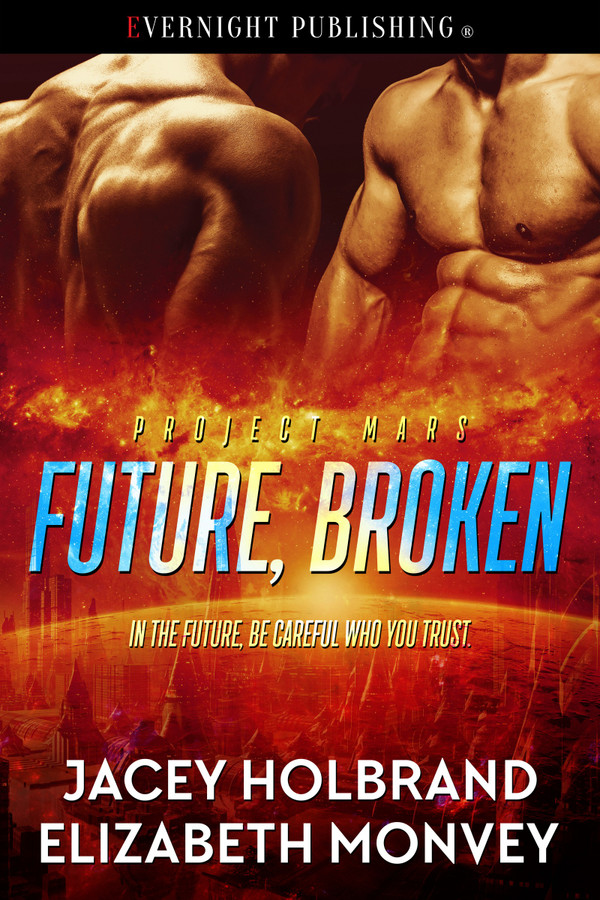 Nathaniel Stockton and Grover Silas Ranger are faced with the ultimate test to their relationship when the Project Mars Lottery comes to town. Nate wins a chance to have his dreams come true: to live and work on the red planet with his love. Yet his husband, Ranger, doesn't see the point of going from one bad place to another. But an evil organization called Sector has a completely different idea for the couple.

Kidnapped, experimented on, impregnated, and sent to Mars, Nate realizes too late he trusted the wrong people.

Ranger fights to find a way to Nate. Will he make it to his love before their dreams and lives are irrevocably broken by distance, a pregnancy, and the corrupt agency?

“Huh. There’s nothing in here describing in detail what the studies involve.”

“So? Whatever they do, don’t you think it’ll be worth it? We either make money to go to Mars, or we go to Mars on their dime.”

Whatever they do? A chill ran through Nate. Maybe this is too good to be true. “I don’t know. I was hoping for a bit more info before I made a decision. They’ve included a lot of legal stuff… An NDA, a waiver, an NCC but no particulars. What if they give us a drug that causes irreparable harm to us? Who knows what kind of side effects we’ll experience?”

“Is there a number in there? Or a link to an FAQ to find some answers to your questions?”

Before he could say, “fishy,” an intense rapping sounded on their front door.

Nate shrugged when Ranger glanced at him with questions in his gaze. Ranger went to find out who was there.

“No. That’s me,” Nate said coming up behind his husband.

Across the hall, a door opened. One of the brutes shifted to check it out, and Nate caught a glimpse of one of his neighbors. A scrawny man, who was a sliver in the doorway and couldn’t block the sight of the cubicles filling the living area. From what Nate and his roommates knew of their neighbors, at least ten people lived in the apartment across the way, dividing up the space with the compartments and sharing the kitchen and bathroom as common areas. Cubicle living was a step up from the cage housing Nate had heard of, but it was still sad the only way to afford a roof over a person’s head was to shove together in already cramped quarters.

The neighbor gasped at the sight of the burly guys and slammed his door.

Ranger put his arm out and blocked the doorway. “He’s not going anywhere. Not without explanation and not without me.”

“Move to the side, sir. We have orders to bring Mister Stockton with us.” The huge bodyguard-type man stepped forward.

“Orders?” The chill Nate had felt earlier returned. “By who?”

“By Sector.” Doctor Horrigan came into view. His uber-white, toothy grin appeared sinister. “Doctor Trask had us on standby. You’ve received the package of information about the study?”

“If you could call it that,” Nate supplied. “More forms and legalities than anything about the study.” Something’s not right. Nate’s unease grew. His skin reacted as if thousands of tiny, nipping bugs crawled all over him. Then what the doctor had said clicked. “Trask said you guys weren’t affiliated with Sector.”

“I believe Doctor Trask mentioned we are not associated with the lottery.” Doctor Horrigan winked and shifted his mouth to a half smile. “As for the forms, they explained the compensation, though, correct?”

“Nate, who’s this guy?” Ranger looked over his shoulder at him.

“Doctor Horrigan. The dude who delivered the bad news to me at the lottery exams.”

“And the man who will make your dreams come true,” the doctor added, sounding like one of the shiftless salesmen down on the street corners selling their fake cure-alls. “Now, if you’ll come with us, we can start you two on your new lives.”

Ranger dropped his arm, moved, and filled the doorway with his body. “We haven’t made a decision yet about joining the study. We haven’t signed anything. You can’t take us anywhere.”

The burly men closed in on the doctor as if they expected a fight to break out in any moment.

The doctor held up a hand. His grin disappeared. “Sure. Okay,” he said in a snarky tone. “But, really, what is there to think about? All that money?” His voice sounded edgy, almost on the verge of frantic anger. “It’s more than the two of you will ever make. It’s a no-brainer. That’s why we arrive at potentials’ homes right after they receive the download. This way there’s no delay in doing what needs to be done and starting on the new path.” He narrowed his gaze at Nate. “I thought you wanted to go to Mars.”

Lord, help me, of course I do.

Have read many scifi novels but nothing like this from the beginning to the end you could not set the book down. For once I really did not mind reading about a man getting pregnant due to the world we live in and how fast thing are changing and so many medical marvels are happening. So in the future could science developers design a way to for men to become pregnant. From what I read it sound like what we call global warming and what could happen to the earth and we may have to one day find another place to live and what if the issues make were normal child birth is impossible what then. You will enjoy reading a story of four men two who are married and two who are lovers and what they go thru to survive and thrive on a dying planet and how the two are married get involved in a weird science project thinking they would get to Mars to live as a couple but they find they are lied to and they are separated and each one of them must find a way to survive and get to Mars so they can hopefully find the other. I guess you could say that this is a really a true love story.

Nate discovers he’s trusted the wrong people and it’s going to cost him, dearly. His only choice is to survive long enough for Ranger to come to the rescue. This is a pretty straight forward story. Nate trusts the wrong people. He’s experimented on and becomes pregnant. Yes, that’s right, it’s an mpreg book. If you follow my reviews you know I’m really not a fan of mpreg. However, this is on The TBR Pile’s must read list so I gave it a try. Nate, now knocked up, is sent to mars. Meanwhile the love of his life Ranger is trying desperately to find him. Other than the mpreg this is a good story. Romance and danger in a scifi setting really works well! Ranger and Nate are already a couple so there’s no romantic build up but they have really hot sex in several scenes. Then he … well he poops out a baby. I’m not sure how else to say that. The ending is a happy one for Nate and Ranger. This also leads to a light cliffhanger that suggests more books in this series. Overall, Future Broken is a good read. I really enjoyed the romance and the world building.

This is the first book I’ve read by either of these authors and I can’t wait for future books either separately or together. The characters were well developed and the storyline intriguing. Nate trust the wrong people and it is going to cost him. They ran all kinds of tests and experiments on him and one experiment he becomes pregnant. Once Nate is pregnant he gets shipped off to Mars, will the love of his life Ranger find and rescue him and time? Ranger desperately wants to find his husband but all kind of roadblocks are thrown up when he finds out he was shipped off to Mars. Will they get their HEA after what was done to Nate? I can’t wait for the continuation of the series.