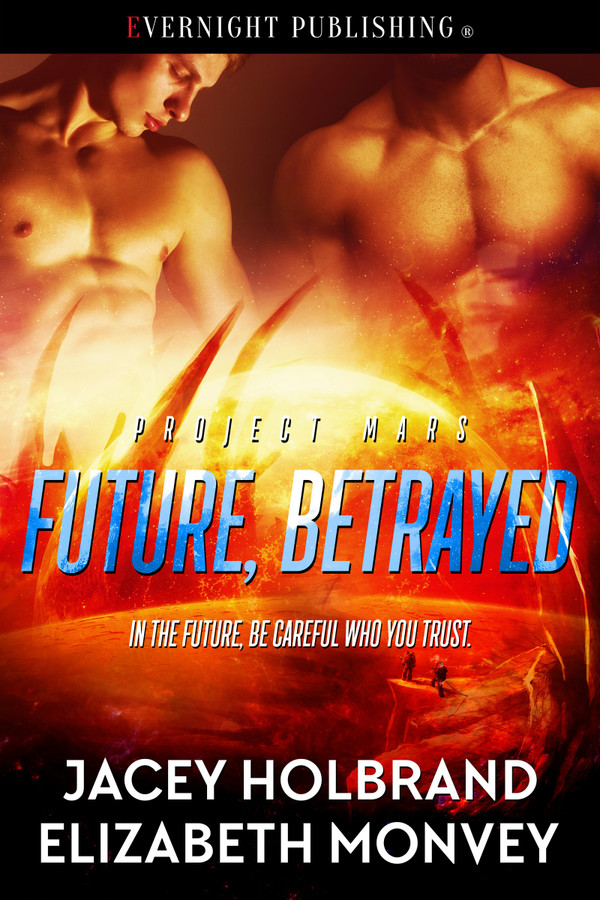 In the future, be careful who you trust…

Ben Stockton lives on a dying Earth. A poisoned atmosphere and fertility issues are only two of the reasons people flock to the Project Mars Lottery, hoping to win a chance to go to the Red Planet. When Ben’s husband, Dain, is targeted as a potential DNA donor, the once exciting prospect of starting over turns into a nightmare.

Forced to work for the governmental scientific agency, Sector, Dain is sent to Mars on a secret mission, while Ben has to remain behind. Separated from each other, they try to cling to the memories of their love as well as the hope that one day they’ll be reunited.

But Sector has different plans for the couple. Unbeknownst to Ben, Sector has used him as a test subject in a desperate bid to cure the sterility problems facing the human race. Impregnated and left alone, Ben stumbles upon the underground resistance. It will take all his strength to find the love of his life before Dain is lost to him forever.

Hours had passed since he’d signed that fucking contract, and doubts swirled around in his brain, assaulting him with questions if there weren’t something else he could’ve, should’ve, done. The logical side assured him there’d been no other choice. Sector held all the medical technology to save Ben’s life, so he supposed it didn’t much matter now. All he could do was go forward with Ben’s treatments until the PWP had been eradicated from his lungs, and then once he was cured, figure out how the hell to get from under Sector’s thumb.

Time trickled by slowly, and it was hard to keep his impatience in check. Finally, after what felt like an eternity, the door slid open, and Ben stepped inside. Dain jumped to his feet and pulled him close for a tight hug.

“What happened?” Ben asked, the question slightly muffled since his face was pressed into Dain’s shoulder. “I was told I have PWP and then was taken in for treatment. They zapped the chip in my wrist. Did you do something?”

“Not here,” Dain muttered. He pulled back and stared at Ben. “How are you feeling?”

“I’m feeling fine,” Ben replied, frowning. “But you’re freaking me the hell out.”

Dain took hold of his hand, linking their fingers. “Come on. We have a lot to talk about.”

It didn’t take them long to leave Sector, although Dain felt them being watched as they donned their breathers before making their way out of the glass building, quickly getting on a train that would take them back to their home. Through the entire trip, he refused to let go of Ben’s hand, knowing their world was about to change.

When they got home, he was relieved that Nate and Ranger weren’t around. He and Ben had things to talk over and decide before family came into the picture. Once inside, Dain grabbed two beers and handed one to Ben.

“So why would Sector give me such an expensive treatment?” Ben asked, taking the beer and sitting down on the couch. “They don’t help people like me, so I’m thinking you must have passed their tests.”

“I didn’t take their tests,” Dain replied grimly. “I didn’t have to. Like I thought, they engineered finding the right DNA, and I happened to be the unlucky schmuck Cara Mia found.”

“What … do you have to jack into a cup or something?”

“That’s exactly what I asked.” Dain shook his head. “But no. It’s a little more complicated than that.”

“You don’t have to screw women or anything, do you? Because hell no!”

“No, nothing like that,” he said, sitting next to him. “Ben, listen, Doctor Trask said they would cure you of PWP if I agreed to go to Mars. So, I had to sign the contract. I had to make sure you were going to be okay.”

“Wait, wait. What does that mean? What contract?”

Dain took a deep breath. “There’s a lot of unrest on Mars. More than even I thought. There’s a resistance that’s taken hold there, and Trask wants me to find the leader and kill him.”

“And what am I supposed to do? Let you die? Don’t ask me to do that. I will do the shittiest, most godawful thing in the world to make sure you are okay.”

“What if I don’t want you to do that for me? Your soul is not worth mine.”

“Damn you,” Ben muttered softly. “The fucking nanotech is inside me. I was told they would die off once their job was finished. For Sector to invest that much in a nobody, they must really trust you.”

“I’m not sure if that’s the case or the fact I left Sector with secrets they don’t want anyone to know.”

“I don’t think that’s in their plans,” Dain replied. “I get you healthy, and they get me.”

“The only thing you have to do is get completely well. That’s paramount.”

“That might take a couple of weeks,” Ben reminded him. “I’m supposed to go back to get my clean bill of health.”

“Good,” Dain said. “Which is why we keep up the pretense of me going to Mars for a great job or something, and you stay here.”

Ben grabbed his hand. “I’m not leaving you.”

“Of course not,” Dain assured, squeezing back. “We have to play this smart. The most important thing is your health, so as soon as the nanotech do their job, I’ll figure out some way to get back to Earth. I don’t care about going back on my agreement with them once you’re cured.”

“I don’t either,” Dain said. “That’s why, while you’re here waiting for a clean bill of health, you can fly under the radar and find others who don’t trust Sector. There’s a resistance on Mars and a resistance on Earth. The more we know, the more we can protect ourselves.”

First it felt like the author through the book together not thinking it out as the first book. It left me with more questions with answers and why was the author in a rush go put it out. The first book to you on a journey from the start to the end. This book started off good but it plainly died and you never got to know the two main characters or the characters that involved with them or if they had some adventure or if it was all just flat.

Future Betrayed is a similar story to the first in the Project Mars series. Sector forces Dain to work on Mars while his partner Ben remains on a dying earth. But that doesn’t last. Sector has discovered a way to impregnate men and this couple must face their darkest hour to reunite. This is a bit too similar to the first story but I enjoyed it. The author does a fantastic job writing likeable, realistic characters. Both Dain and Ben really make a great couple. I can feel the bond between them and very quickly I was routing for them to have their happy ending. The story does feel rushed. Several plot points are solved too quickly. Then we come to the pregnancy which is not something I enjoy or normally read about. The scifi aspect of this series has been interesting so far. I hope the author continues the series but perhaps more diverse plots for future stories. I really like the idea of an evil corporation that’s trying awful ways to help the human population and a resistance trying to stop them. Future Betrayed is an interesting addition to this scifi series.

Well we are back on Mars and the corruption continues. This book has a unique plot and storyline but not well developed characters. I found it hard to connect with and care about Dain and Ben. Dain is sent to Mars to help “cure” the sterility problem Earth is facing while Ben is left behind. The jig is up when Dain realizes it’s not for the betterment of humanity that he is chosen. Will Dain and Ben be reunited? Will their love see them through the bleak times?