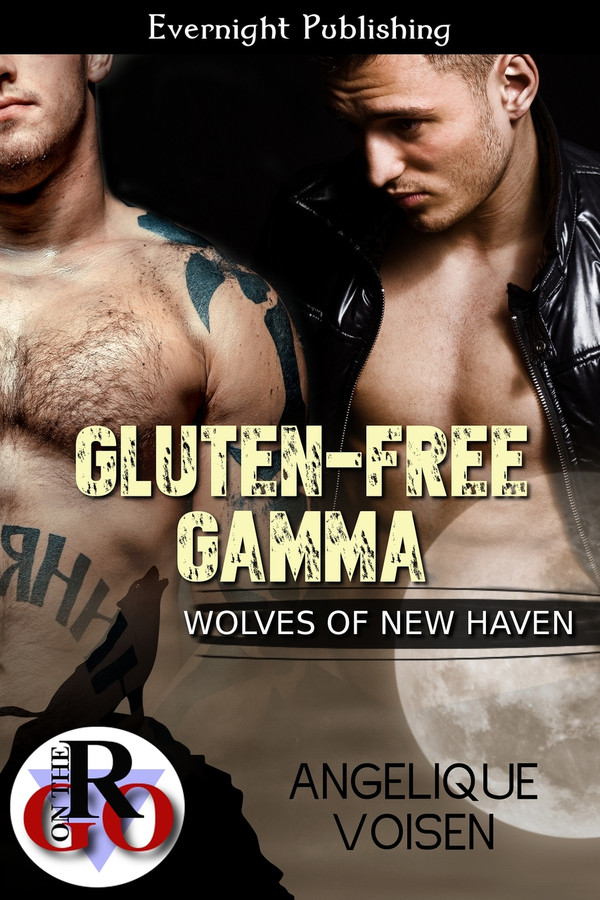 Alvin Heinz is a gluten-challenged Gamma werewolf who can pick any mate in the New Haven pack, but the only mate he wants is the only wolf he cannot have.

Terrence Neo is one of the pack’s fiercest enforcers. Chained to his past and shattered by the rejection of his former mate, he’s sworn to lead a solitary existence. The rest of the wolves respect his decision, but not Al.

When Terrence’s old mate returns to New Haven seeking to win him back, Al refuses to let the Beta go, but is Terrence willing to fight for their future, or will he allow himself to be lured back into the chains of his past?

“Fuck, Al. That was amazing.” Terrence stared down at him, amber nearly swallowing all of his irises.

That bestial look didn’t frighten Al. If possible, he was hornier than ever.

“Now its time I take care of you.”

Without warning, Terrence jerked Al to his feet. Gravity was swept under him. Yelping, Al suddenly found himself being carried in Terrence’s arms.

“Shit, man, how are you able to carry me?” Al heard himself asking.

“If you make one more lame-assed remark about your weight, I’m going to gag you,” Terrence said dryly, dumping him unceremoniously on the edge of a very comfy bed.

“Gag me?” Al asked in a faint voice. The idea of his voice being stolen and his mouth reduced to animal sounds while Terrence fucked him senseless had its appeal.

Seeing his expression, Terrence smirked. “So, my baker likes a little kink as well?”

A large hand closed over his sensitive cock, making him whimper. “Don’t lie to me, Al.” Terrence pumped his cock, making him groan, aware of how his body was reacting so strongly to the man he’d wanted for a long time.

A hint of precum leaked out of his cockhead. Terrence gathered the moisture with his fingers and, without warning, licked them off. “Tasty.” Terrence watched his reaction all that while.

Shit. Al nearly came on the spot again, but Terrence closed his fingers around his length again.

“Not yet, my little baker. You’ll come only after I tell you to. Wait here while I fetch a few things.”

Terrence left him, miserable and hornier than ever, in his bed. Moments later, he returned with lube, leather cuffs, and ball gag in hand. Al swallowed but didn’t protest when those strong arms placed both Al’s arms above his head and locked the cuffs. Next came the ball gag, rendering him mute.

All six feet plus of sexy muscles leaned over him, Terrence’s tongue licking his upper lip, down the curve of the rubber ball, and finally lingering on his bottom lip. “Remember, Al. Don’t come yet. I haven’t thoroughly enjoyed you,” Terrence chided, running his wide hand across the length of his chest.

Al groaned out his protest. The contact of Terrence’s warm palm against his skin was enough to make Al whimper with need. His nipples immediately hardened at Terrence’s touch. Terrence paid them his outmost attention too, flicking his tongue over the sensitive buds, teasing Al to his limits.

Faint pain surged through him when Terrence’s teeth closed over one bud, sending his body arching. Before pleasure could follow, Terrence set his teeth on the other. Twin sensations flooded his body by the time Terrence kissed his way downward. He left a trail of lazy wet circles down his chest, abdomen, and stomach.

Al answered with a series of moans.

Wolves of New Haven Bk 3. This bk the third of the series is a light quick easy and enjoyable read.This Book is about Alvin and Terrence. At the end of the book (which really I didn&#039;t want it to finish)I just wanted the next book, which I was very lucky as I had kept my eye on the books and waited to 5 books of the series was out before starting.3 books down 2 to go loving this series.

The fun and interesting world of diabetic, vegan werewolves, some with heart problems even, continues in &#039;Gluten-Free Gamma&#039;, book three in Angelique Voisen&#039;s series &#039;Wolves of New Haven&#039;. If you enjoy fast reads with a different world build, and sweet characters, then this is the series for you. Al is a short, round gamma, who loves nothing more than baking, and Terrence. Unfortunately, Al has celiac disease, so he can&#039;t eat any gluten, and Terrence is a solitary, lone wolf, who Al is certain has no idea he even exists. Al is proven wrong when Terrence takes him home, but warns him he doesn&#039;t take mates, and never will, although he&#039;ll certainly have sex with Al. Terrence had his heart and his trust severely broken years before, leaving him with the knowledge that he&#039;s incapable of being who, and what, Al needs. It doesn&#039;t matter how much Terrence&#039;s wolf tries to convince him they&#039;re mates, Terrence is wary of that commitment. An exciting story, with Al getting to be the hero at the end! I really liked Al, and Terrence is hotter than hot. An enjoyable read.