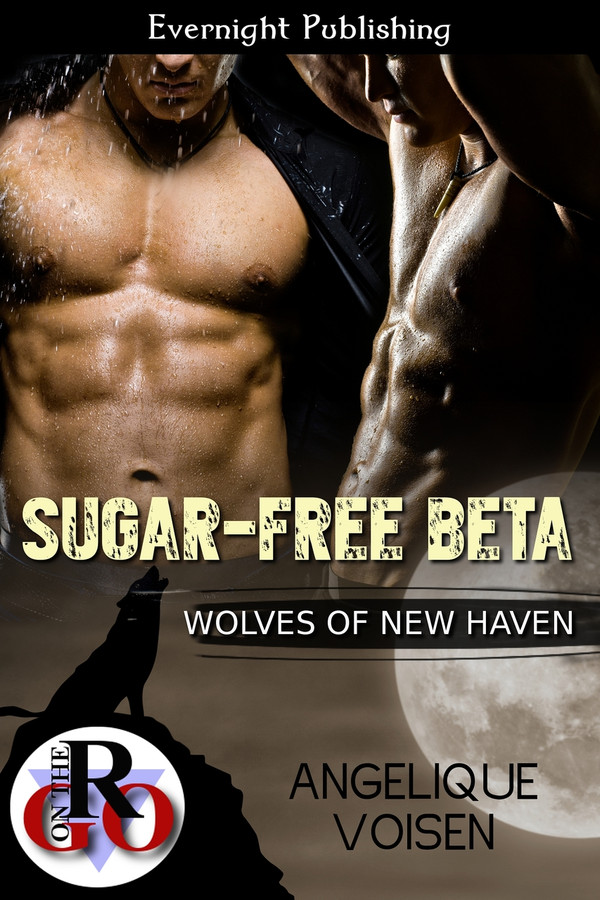 Derrick Starr is a sad excuse for a dominant werewolf. Unlike most werewolves, he’s sworn off meat and has an abnormal preference for sweets. He’s also in a bad state—his lover left him and he’s just learned that he has type 2 diabetes. An unexpected act of kindness triggers his meeting with Jack, a submissive wolf on the run from his abusive Alpha.

When Derrick finds out that Jack is his fated mate, will he be able to do what it takes to protect and claim what’s rightfully his?

“Just shut up and let me examine the wound,” Derrick demanded, sitting by the bed. It only got on his nerves the way Jack looked smugly at him when he cleaned away the dried blood. The wound wasn’t just healing. It was fully and completely healed. Only a shiny pink scar remained.

“I’ve heard of that, but I’ve never actually seen it,” Derrick murmured.

“So can we continue, or do you have another excuse?” Jack demanded.

Derrick had a mind to say something witty, but the Gamma slid one hand at the back of Derrick’s neck and leaned forward to kiss him again. His other hand rested on Derrick’s chest. Warmth exploded inside Derrick’s mouth, making him pull Jack towards him. The Gamma didn’t protest. He only leaned closer, his skin rubbing against him.

The need to touch his mate enveloped him. Their bodies needed to touch and kiss, to caress and torment, and to know every single inch of each other. It eluded Derrick suddenly, why he’d been such a fool. How did he live this long, without knowing the touch of his fated mate?

Derrick could feel the Gamma’s wolf, contained inside his lovely lean body. Jack’s wolf happily rubbed against his own wolf, and the great red only rumbled its growing approval. The Gamma’s pert hands wandered, tweaking one of his nipples until it was hard. Derrick moaned, but it was silenced by Jack’s persistent mouth. Jack’s hand wandered with deliberate slowness down his chest and his belly, until it curved around his growing hardness.

Jack didn’t answer him. The Gamma only pressed his lips against his, his hand busy at work. Jack stroked, fondled, and caressed his cock until it was nearly hard and ready.

This book is the first one of The Wolves of New Haven serie. The story is about Derrick who has diabete, and Jack a gamma-wolf who was abused. There is everything in this book: werewolves who aren&#039;t supermen, fights, blood, sex, life mates... The only negative point is it&#039;s too short!

Derrick Starr has always seen himself as a weaker wolf being too short and kind of overweight. He now finds out he has type 2 diabetes and he feels even worse. Then he meets his mate in Jack. The story really gets moving. They have a bit of a rocky start and it’s stressful. But the two men come together and form a bond. They bond serves them well with all the outside distractions. Those distractions did add to the storyline. Overall the story is short and good. This is the first in the Wolves of New Haven series and I’m looking forward to more stories in this series.

Wolves of New Haven Bk 1. This bk the first of the series is a light quick easy and enjoyable read.This Book is about Derrick and Jack. At the end of the book (which really I didn&#039;t want it to finish)I just wanted the next book, which I was very lucky as I had kept my eye on the books and waited to 5 books of the series was out before starting.

Derrick Starr is a sad excuse for a dominant werewolf. Unlike most werewolves, he’s sworn off meat and has an abnormal preference for sweets. He’s also in a bad state—his lover left him and he’s just learned that he has type 2 diabetes. An unexpected act of kindness triggers his meeting with Jack, a submissive wolf on the run from his abusive Alpha. When Derrick finds out that Jack is his fated mate, will he be able to do what it takes to protect and claim what’s rightfully his? I really enjoy shifter stories and &#039;Sugar-free Beta&#039; is certainly a different kind. The author has veered from the stereotypical norms and instead has created a shifter world where a werewolf can be overweight, out of shape, a vegetarian, and a diabetic. Huh. Definitely different. Derrick is a sweet and shy beta wolf, second only to an alpha in dominance and power. He lives the life of a lone wolf as he is exiled from his family pack. Derrick&#039;s boyfriend, Jared, has just left him and other than missing the sex, Derrick can&#039;t really seem to get up the energy to be too upset about it. He knows Jared, as a lesser wolf, took advantage of Derrick but he doesn&#039;t like to throw his strength around. Derrick is no coward, but he didn&#039;t feel Jared was worth fighting for. When Derrick runs into Jack, the really adorable barista from the coffee shop, being attacked in the park by an alpha wolf, well, that&#039;s something worth fighting for. Good thing he is, since Jack is Derrick&#039;s fated mate, and the crazy alpha attacking him is who Jack has been running away from for months. This was a cute story, although too short. *grins* With that said, however, in my opinion the author did a fairly decent job fleshing out the characters and the plot in such a limited number of pages. Overall, I enjoyed it.