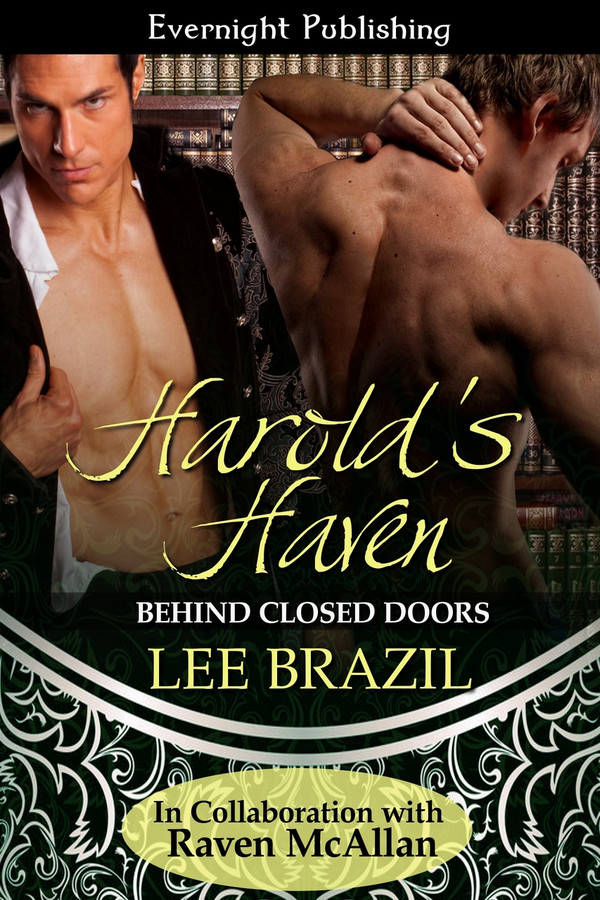 It takes an irresistible bribe to pry Harold Gretton away from his experiments to act as a bodyguard for an escaped prisoner. Bored with his confinement, American businessman Martin Tillman is delighted to find that Harold is a like-minded fellow. The sparks that fly between them seem to go beyond mere passion to Martin, but Harold is disinclined to put his trust in emotion.

Can Martin convince his scientific lover that what lies between them is more than experimentation?

~ In Collaboration with Raven McAllan~

Inside the hackney carriage and not quite certain how he'd managed to land there, Harold shrugged and focused on his would be rescuer's speech. The man was from America, one of the former colonies in the north. His speech was well educated and clearly city as opposed to country. Harold didn't get the opportunity to try his skills with Americans often, given that their countries had been at war for the better part of his lifetime. Some things were universal among the well-to-do though, and this man had all the rounded consonants and clear elucidation of the upper crust.

Having paused to speak to the driver, his would be rescuer stepped in behind him, efficiently lowering the window shows to shroud them in darkness and keep prying eyes out. Harold was conscious of a twinge of disappointment at the darkness. His eyes would adjust, it was true, but he enjoyed the nuances of expression and the knowledge to be gained from close observation. To his surprise, rather than seating himself opposite Harold, Martin elected to sit next to him on the faded velvet cushion.

That gave him a better view than he would have had, and Harold relaxed a bit.

He stared at the thin rose tinted lips, waiting for the next sound to emerge. The carriage jerked into motion, sending Harold back against the squabs. He winced as a few of his bruises protested the abrupt contact. Did he still have arnica? Perhaps after Hatchard's he'd need to visit the apothecary. What did rose tinted lips taste like? Where the fuck, he stumbled over the word in his thoughts, had that come from?

Startled, Harold raised his eyes from the man's mouth and flushed when he caught Martin's gaze. Embarrassment and a stranger fluttery something else filled him as he caught the amusement and an odd heat in Martin's eyes. "I’m so sorry. I didn't mean to stare. I was just waiting for you to continue speaking."

"Do you have hearing problems?" The sympathy in the man's voice embarrassed him even more. Martin slid a little closer on the squabs, and one big hand landed on the dirt-streaked thigh of Harold's trousers.

It felt like he'd been seared by a bolt of lightning. He couldn't help the way he jerked away from that touch. "No!" Seeing Martin's startled expression, he tried to regain control of himself. "I mean, I don't have any hearing problems. I study speech. I've narrowed you down to the Northern cities of North America, one of the English Colonies not the French, and if you'll just keep speaking in a normal clear voice I think I can identify the city of your origin." He stumbled to a stop as the hand that had touched his thigh lifted. His breath caught in his throat and he watched, mouth agape and eyes widening as the hand approached his face. He couldn’t seem to break away from that sherry brown gaze, the warmth and humor in those eyes causing more confusion in his body…and mind.

"Ah. I didn't mean to offend. It's just that I had a clerk in the Boston office who was hard of hearing, but if he watched a person's mouth he could understand what they were saying." Martin leaned even closer, and Harold could swear that heat rose off him in tangible waves.

"Don't." Was that his voice, so breathy and deep?

The strange flutter in his belly increased, his spine stiffened and he shrank back against the cushions. Martin's brows drew together slightly, then he smiled softly. "I'm not going to do anything." He brushed the lock of hair on Harold's forehead back behind his ear then withdrew. Martin leaned back against the cushions in his corner of the carriage and Harold squirmed a bit more under that curious, thoughtful gaze.

"Oh, that. Um. Thanks. It's forever coming loose."

"You're afraid of me?" Martin asked.

"Afraid? Of you? No, I'm fairly sure I can take you in a fight." A thin dark brow rose dubiously. "No, really. You fight too clean. That fellow would have had you in a few more minutes."

"And you could have done better I suppose?"

"Of a certainty. Gentlemen never fight to win, they fight according to the rules. When some bastard's pulled you into an alley and is trying to make off with your purse, even though you've told him you don't have one because your idiot brother has dragged you out of the house to a meeting even though you're busy working, well then you have to be as big a bastard as he is and kick him square in the ballocks."

"It's not a question of honor when life and death are involved, you see." But from the non-plussed expression on the man's face, he clearly didn't see. "Now see here, you should understand this. You Americans, you didn't even fight the war according to the rules. Why are you so all amuck over me kicking some miscreant where it hurts?"

Instead of an answer he found himself dragged across the carriage and hauled into the taller man's lap. It crossed his mind that perhaps he'd have been better off trusting the thugs, but he didn't have time to analyze the situation before a pair of hard lips closed on his own.

Heat exploded from the writhing in his belly, and he gasped. He'd been kissed before, more than once. Ladies had been attempting to lure him into marriage or their beds since he'd turned sixteen, though he'd always assumed their interest had more to do with the family name and fortune than any attraction to his youth.

Several had stolen kisses at picnics and balls over the years, yet none of their soft sweet nibblings had felt like this. This kiss bruised his lips with passion, forced a response he'd never experienced before.

Although historical romance is not my favorite genre, this series has a lot of laughs and fun characters. I can&#039;t wait to see which of these siblings finds his match next!