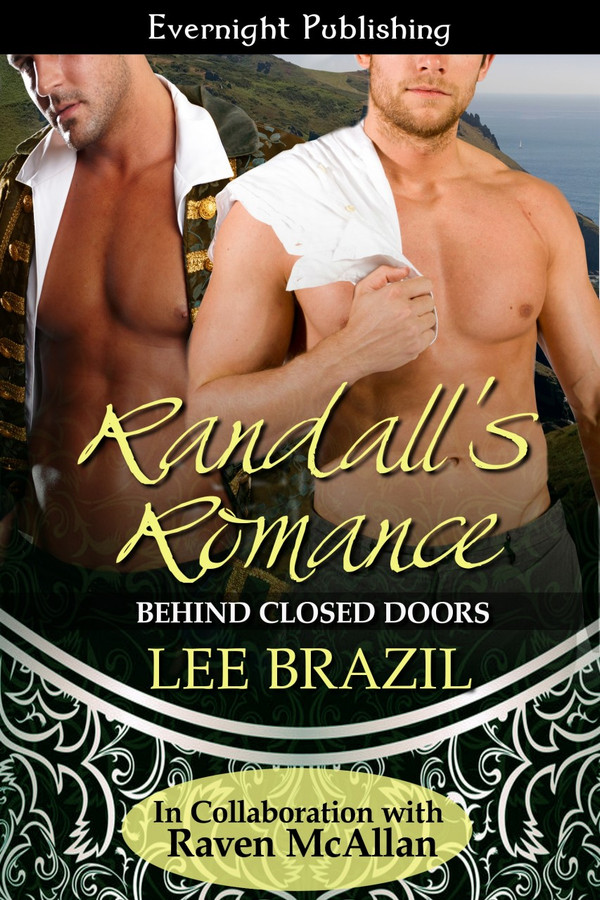 When Randall Gretton's father leaves his family behind to seek out his lost love, Randall finds an unexpected sympathy in his father's actions. The dashing soldier takes completely to heart his father's advice to his children, "If you are fortunate enough to find love, then seize it."

Is a chance encounter at a masquerade Randall's chance at lifetime love?

~ In Collaboration with Raven McAllan~

He closed the door behind himself and turned the key in the lock. The book room was lit by a single porcelain candelabrum on the mantel piece. In the flickering candlelight he located Terence at the fireplace, swirling a snifter of brandy in his hand. Terence turned his head, tensing at the sound of the key turning in the lock.

"Never fear. It's just me. I'd about given up hope of finding you; there are so very many highwaymen present tonight. Next time you must choose a more singular disguise." Checking the room carefully for any other entrance, Randall realized Terence had chosen the perfect place for their encounter.

The highwayman glanced back at him, dark eyes glittering through the slits of his long mask. "I'd hate to draw attention." Hi voice was muffled by the mask, but Randall caught the faint foreign accent he aped and rolled his eyes.

Randall felt his blood heat as that hooded gaze traveled down his form. His cock stirred and this time he made no move to hide his interest. "Truth, Terence, attention is to be avoided, but there is something to be said for ease of recognition in these circumstances."

He crossed the Aubusson carpet to stand in front of his lover, drew the man to him. Terence came willingly enough into his embrace, but when Randall tried to raise the man's domino to reveal his features, Terence caught his hand in a gloved grip. "No. Just in case, we must be discreet."

"I did lock the door, you know." Randall buried his face in the fabric and tightened his arms, crushing Terence along his length. The man's costume was a miracle of tailoring, for he seemed to have even added padding to his narrow shoulders and lifts to his boots.

"Yes, but that might not be the only key."

Truly, Terence was more concerned than usual about being recognized! He'd even foregone his normal heavy drenching of spicy oriental scent in favor of a delicate sandalwood cologne that teased at Randall's senses quite delightfully. Reluctantly Randall released his crushing grip on the domino and let his hands slide down Terence's back to cup his taut buttocks through the thin pantaloons. "Very well, then. Come away with me for the night so we can be private."

"I cannot." Hard hands closed on his own buttocks, squeezed them meaningfully. Randall shivered. His cock thickened, his blood stirred. Terence pulled him closer still, so that their groins rested against one another. A few thin layers of fabric separated them, but the heat was as unmistakable as the thick ridge his prick rubbed against.

"But I leave tomorrow, I told you as much." Randall protested, grinding into the sweet pressure on his prick. "Never mind. If this is all the moment we have, then I want more than this." He wedged his hands in between their bodies, enjoyed Terence's gasp when he squeezed the man's prick through his pantaloons, and began working their garments open.

"You're very bold tonight." The breathless statement was followed by a swift, muttered curse as Randall caught their pricks in his hand and stroked them together.

"I?" Randall leaned into Terence and bit the man's ear lobe sharply. "I suggested we meet in the usual place, secure and behind closed doors. You were the one who had a hankering for challenging the ton. Is it turning you on, making you hot to think that just a few feet away the others are dancing and drinking and making merry?"

"Damn you, harder!" Terence's hand closed over his and Randall shuddered as the grip tightened, the rhythm roughened. He stared down between them, to where their hands slid up and down, squeezing drops of clear liquid from each prick that mingled and streamed down to slick the path of their movements. Terence's hand on his cock was more erotic than ever, and maybe it was the thought of being caught out, of the scandal that lurked, but his body was tensing, and beads of perspiration formed. He threw back his head, slipped his free hand down the back of Terence's pantaloons and into his small clothes. Terence trembled against him, Randall soothed him with a whispered word, cupped his buttock, and let his fingers trail along the crease of the man's arse.

"I am aware," he chuckled dryly, catching his breath. His fingers brushed over the puckered hole, Terence shuddered, his cock stiffening still further, the skin stretched so tight and fine Randal could swear he felt the man's heart beat in the blood that swelled his organ.

"Damnation...so very good." Terence was bucking into his grip, losing his rhythm. Randal rubbed the hole, pressed the very tip of his finger inside, and let the exultation flood him as Terence's seed spilled along his cock, in jet after jet.

"That's right." He murmured. "Give me your pleasure." He milked the softening cock of every last drop of seed, then wiped them both off with his handkerchief.

His cock throbbed with want, and he smiled at the man he'd come to realize was most decidedly not Terence. "At this point, Terence would drop to his knees and suck me. Are you of a like mind?"

"So you've realized I'm not your friend, have you?" The strange highwayman tucked himself away and refastened his pantaloons. "What happens now?"

"Now, I'm still in need of release, and you are a likeminded fellow it seems. If you cannot bring yourself to suck me, then your hand will do as well."

The black domino muted the man's laughter, but he obligingly dropped to his knees on the plush carpet and with a little deft maneuvering of his mask and Randall's cock, had him encased in wet heat and strong suction within moments.

Randall sighed and let his hands rest on the velvet of the mask, ordinarily he'd have twined his fingers in his lover's hair, to give his hands something to do. Idle hands are the devil's work his mother used to say, but then again...so was this sodomy. "You're very good at this," he sighed, sinking deeply into the wet mouth, enjoying the light scrape of teeth. His blood surged, an agile tongue toyed with the tip of his cock on each retreat, swirling and sucking, drawing rushes f pleasure from him as his body tensed, thighs stiffening. Heat pooled and exploded, and with it his seed pulsed into the receptive mouth.

As soon as his senses returned he withdrew politely. The stranger rose to his feet as Randall tucked himself away again. "I don't suppose you'd like to tell me your name, highwayman?"

"You don't suppose correctly. Unless, of course, you'd like to tell me yours, Robin of the Hood? No? I thought not." The man swept a deep bow and waved to the door. "After you, my lord thief."

Randall’s Romance by Lee Brazil is a thoroughly enjoyable, steamy, action packed regency romp. When Randall Gretton’s father Gerald decides to leave the family business the last piece of advice he gives Randall is to seize love if he is lucky enough to find it, not let it slip through his fingers. When Randall has an illicit dalliance at a masquerade ball with a stranger little does he know it’s with Jason Dancourt, his distant cousin, the illegitimate son of his uncle. Only Randall’s brother Peregrine and their father know of Jason’s existence. The enigmatic and mysterious Jason is an intelligence agent working for the Crown, believed by all who knew him to be dead, killed along with his men in France. He now leads a shadowy quest hunting for the traitor who betrayed his men. Randall, working for his brother, gets drawn into the hunt for the same traitor. During the hunt Jason and Randall’s path’s converge and even though neither man trusts each other the attraction is instant, the chemistry between them as electric as the first time they met. As the two men join forces to flush out the traitor Randall finds out who Jason is, what he’s capable of, and soon he has to decide if love is worth the sacrifice he may have to make. I’d find it very hard to pick a favorite character but if I did dark and dangerous Jason would be my choice, he’s very black and white, justice should be simple, and swift. Randall on the other hand wants to follow the letter of the law. Both men want the same thing, the traitor apprehended and the threat eliminated, but the different views they have on how that should be accomplished ramps up the tension between them nicely, which is a counterpart to the lustful attraction they both feel. The story revolves completely around the two men, with most of the secondary characters reduced to nothing more than small supporting roles. I love historical novels, especially regency novels, and Randall’s Romance is one of the better books I’ve read, a cut above the rest. Full of intrigue, spies, kidnapping, action and adventure, the pace never lets up. It reminded me so much of Moonfleet. Unfortunately the blurb for this book is seriously lacking and doesn’t do the story any justice at all. I had a lovely surprise with this book and thoroughly enjoyed it. I’d highly recommend it to anyone who loves steamy hot regency romances, with a side of adventure.