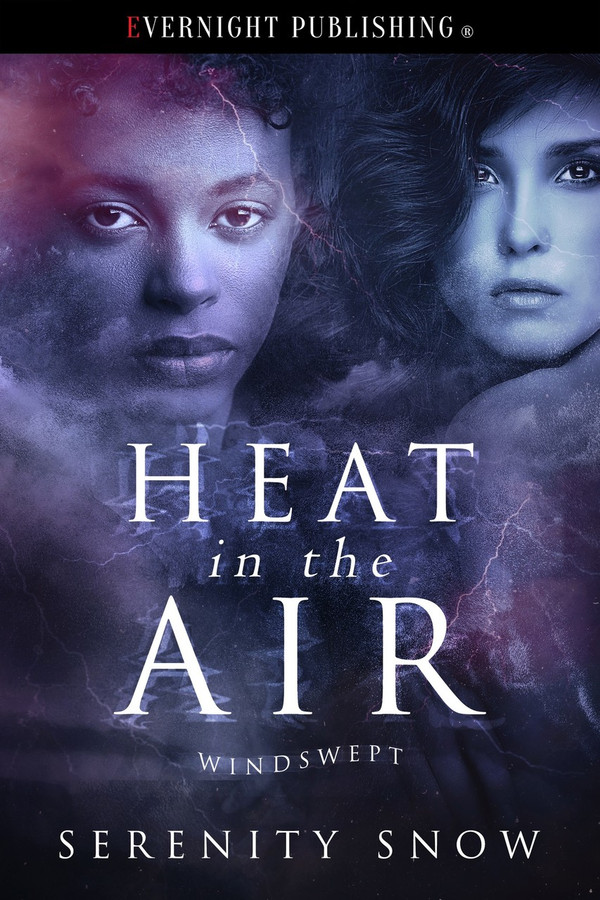 Air is weightless, but the depth of Camille’s growing feelings for Tylor is a heavy burden until a chance meeting in a bar culminates in an irrevocable explosion of passion.

Tylor, a wind nymph and Camille’s boss, was hesitant about beginning an affair when both their jobs could be forfeit, but her hunger for the only one to stir arousal in her this strong in a century is too strong to fight. Now that they’ve begun, there’s no turning back. Their jobs aren’t the only losses they might face as an old enemy sets his sights on Camille.

With so much at stake will the heat in the air burn them alive or will they outwit the deadly danger bent on destruction?

“Hello, Camille.” Tylor turned back to the mirror, and Camille got the feeling Tylor was only pretending not to watch her.

“Hi, Tylor,” she said quietly, her heart raced, and she had to struggle to control her breathing. “I saw you out there, but I didn’t—I mean you didn’t seem to want to be disturbed.”

She frowned and turned to lean against the vanity. “Really? At what point did you get the impression I wouldn’t welcome an interruption from you?”

“I just meant—” Camille’s cheeks heated a little. “I’m gonna go—” She pointed to the stall and turned to go. Tylor’s hand closed around Camille’s upper arm, halting her progress.

Her short sleeves left her skin bare and fire sparked in her blood from the soft touch. Her mouth went dry, and her breath caught.

Tylor’s gaze slowly cruised down Camille, taking in the skirt that covered her thighs leaving her legs displayed in hosiery. Camille felt as if she was being slowly undressed and her nipples tightened in reaction.

“Are those stockings or panty hose?” Tylor’s expression was tight, her eyes dark with interest.

Camille’s clit swelled and her pussy moistened. The implication of the question didn’t escape her. She’d thought Tylor was pretty much oblivious to her as anything other than a fellow educator, but that look in her eyes now had anticipation building in her belly.

“Sexy choice for a night out with a friend,” Tylor murmured as she closed the distance between them. “Or maybe she’s a little more than a friend.”

Camille laughed, backing toward the stalls. She knew how tricky this could get if she said the wrong thing. However, she wanted Tylor, and this might be her only chance to find out if Tylor was interested in her, too.

“Jealous?” she taunted boldly, tilting her chin up as her back met a door.

Tylor’s lips curved. “Should I be?” she asked as she glided her hand slowly down Camille’s arm. “You’re always eating me up with your eyes, so I don’t think that woman you’re with stands much of a chance.”

Her tone was so silky and her eyes, her eyes were storm gray with a ray of heat. “I like your suits,” Camille replied flippantly and shrugged. “The bowtie was cute today.”

Tylor laughed this time. “Were you imagining me tying you up with it before I fucked you on your desk?”

Tylor withdrew her hand and braced it on the stall above and next to Camille’s head. Then she leaned toward her and rested her other hand on Camille’s thigh.

“Do you want that, Camille? Do you want me to make you crazy with pleasure before I fuck you?”

“Are you willing to risk your job for it?” Tylor asked, leaning in close enough that their noses almost touched and her warm breath fanned Camille’s face.

She shivered. This was the moment.

Not even a spell could have given her so perfect a chance, and she was glad she hadn’t cast one as she’d often thought of doing since she’d met Tylor. Love spells were tricky and sometimes went terribly wrong.

“Are you?” The words were a whispered challenge and her stomach fluttered in fear and hope.

“If you’re interested, it’d be worth it,” Tylor murmured.

She was looking for more, but a fling was only a place to begin.

Tylor gave her a slow smile and glided her hand up beneath the skirt of Camille’s dress to toy with the lacy top of her stocking. “We’ll have to be discreet,” Tylor said softly and then claimed Camille’s lips.

The kiss was undemanding, soft, lips brushing against each other, but she wanted more, needed it. So, Camille parted her lips and Tylor’s tongue darted inside. Their tongues came together and ignited heat that went off like a bomb blast inside Camille.

Hunger a raging desire, Camille slid her hands up Tylor’s sides drawing a soft moan from her before she curved one around Tylor’s neck. Camille ground against her and Tylor’s hand moved, pushing open a stall door which played a creaky melody.

Another great book. You&#039;ll find more of the same awesomeness I pointed out in my review of the first book in the series with new characters being introduced,new plot twists, and more world building. I love the worlds that she creates and the characters are so cool I just can&#039;t stop reading her books.