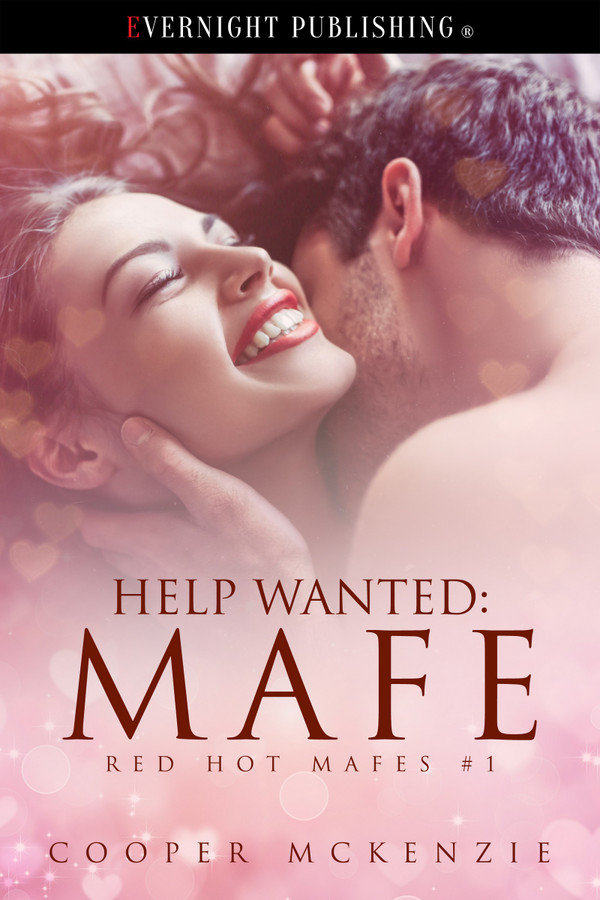 Harper Ellis finds it harder and harder to juggle the responsibilities of her growing design business, her five-year-old daughter, Miranda, and everything involved in keeping their household running. During a girls’ night in with her best friend, Harper lists all the qualities she wants in a man-wife. Little does she expect for Brenna to post the ad.

The “Help Wanted: Mafe” advertisement intrigued him and before he knows it, Air Force veteran Foster Michaels finds himself hired for the job of man-wife by dress designer, Harper Ellis, and her five-year-old daughter, Miranda.

Will Foster be able to take over enough of the household to help Harper meet her deadlines? Will Miranda act out and chase Foster off as she has with previous help? Can Foster come up with a meal comprised entirely of orange foods as requested by the Fairy Princess Miranda?

Foster then turned his attention to the brunette. He took his time looking the woman up and down as she followed her friend to the table. She was taller than her friend, but still much shorter than his own six and a half feet tall. He thought she might be round and curvy, but it was hard to tell. Her top hung on her, disguising rather than emphasizing her curves.

He liked that she was dressed casually in leggings and knee-high boots to go with the oversized shirt. Her dark-brown hair was caught up in a messy bun high on the back of her head. He allowed himself a moment to wish her hair was loose so he could see how long it was. He loved to play with long hair on a woman.

His cock twitched as he scanned down and then back up her body to focus on her face. Her features were fine, her nose slim, her chin pointy, making him think of the elves on the Hobbit movies. When she turned her head, he was almost disappointed to see that the top of her ear wasn’t pointy, but was small and round. The lobe boasted two earrings, a small silver hoop earring and a small silver ball. He wondered for a few seconds what other secrets her clothes hid.

A tramp stamp on her lower back? Or maybe a clit piercing? Something about the woman said that there was a lot more to her than it appeared.

Grabbing his phone off the bar, Foster left his glass of water behind and stalked toward the high-top table. “Good evening, ladies,” he said in his most casual, non-threatening manner.

Brenna smiled at him as she climbed onto a stool, while the other woman whirled to look up at him. In seconds, her expression raced from fear through shock to shy interest before she blinked and blanked her expression.

“Oh, my,” she breathed as she took a step back, bumping into her chair and having to dance a little jig to maintain her balance.

He grabbed her arm to keep her from tripping over the chair as it fell to the ground. “Foster Michaels, mafe applicant,” he said with a grin. He waited until she was steady on her feet before releasing her arm. He picked up the fallen chair before offering his right hand.

She shook his hand with a firm business-like handshake, which impressed him. The tingling warmth that flowed between their palms had his cock twitching with interest.

“Are you all right?” he asked when she simply stared up at him.

“You’ll have to excuse, Harper. She’s out of practice when it comes to talking to men,” Brenna said from her seat. “Girlfriend, let go of the man and sit down.”

Harper blinked then glanced down at their hands, which were still moving up and down in a long, drawn-out handshake. Then she looked at her friend and squeaked. She immediately released his hand, pulling her right hand around behind her back.

While tempted to assure her that he would be happy to hold her hand any time for as long as she wanted, Foster remained silent. He then shifted around the table to an empty chair so the ladies wouldn’t see that his cock pushed at the front of his pants. His body already hoped he and Harper might get better acquainted ASAP. As in, your-place-or-mine better acquainted. His body didn’t care that they were still strangers, it knew what he needed.

Once they were seated, the bartender appeared to stand in the space between Foster and Harper. “What can I get you tonight, ladies?” the bartender asked, as if their appearing at the bar on a Tuesday evening was a common occurrence.

After they placed their orders, Harper’s for a hard apple cider, and Brenna’s for a glass of the house white wine, Foster added his order for a beer. He then turned his head and quietly told the bartender he’d be taking care of the tab at the end of the night.

Turning back, he looked into Harper’s deep brown eyes found himself swimming in warm chocolate. He blinked as he cleared his throat and reminded his body that he was here about a job, not a hook-up no matter how attracted to Harper he found himself.

“So, Harper, what is a mafe?” he asked, relaxing into his chair once the bartender moved away from the table.

What woman wouldn&#039;t want a Mafe in her life, married or not. It never seems like there is enough time in a day for a working mom (or any mom really) to do all the things that need to be done, especially for a single mom of a precocious 5 year old. A sexy ex military guy like Foster can by my Mafe anyday!

Harper is struggling to balance her life. Between her energetic, smart five year old daughter, running her own rapidly growing business and keeping her house from looking like it was falling apart she has no time left over for luxuries like sleep. When her best friend starts talking about a mafe – a man-wife – Harper thinks it’s an excellent idea, but she has no idea her friend had actually taken the suggestion and run an add for Harper requesting just this. When Foster Michaels answers the advertisement at first it seems a little too crazy, but Harper is desperate for the help. Previous to this story I’d not heard of a mafe and was pleased that the author clearly (and early on in the story) explained exactly what it was, a man-wife, responsible and keen to stay at home and cook, clean and help with the children. I liked the idea and found as a plot device it was really strong. I also immediately adored Foster’s character. Financially comfortable and at a loose end after quitting his job as a paramedic and the crazy shift hours just no longer worked for him – or his PTSD after serving in the Air Force – Foster is looking for a challenge and something to keep boredom at bay. While the whole concept of a mafe is outside the box for him, he knows it will certainly keep him busy and retain his attention. It took me a while to get on board with Foster and Harper’s professional and romantic relationship. I’m not certain whether I just didn’t feel enough chemistry between them, or whether the whole insta-lust coupled with a professional relationship all in the space of a few hours of meeting each other just didn’t work for me. Particularly when they back-tracked the relationship after that first day, but then were intimate again mere hours after deciding to remain platonic. The entire aspect of their relationship (working vs romantic) just felt jumbled, confusing and uncertain to me – the back and forth of sexual to platonic felt weird and uncomfortable to me because Harper kept saying one thing, but then initiating something completely different. I think I just never really felt I understood what she really felt or wanted for herself and in particular from Foster. Despite the fact this story is meant to be a sexy romance I feel it would have been far stronger had the chemistry and attraction been built up from the start and Harper and Foster had given the whole situation more time to evolve more naturally and realistically. I think this would have also sold me a lot more on the chemistry and attraction between the two characters – which I really didn’t feel until almost half way into the story. The real strength in the story I felt was the characters themselves. Harper in particular was extremely relatable to my mind. Strong, capable, modern and trying to do it all I feel she will really resonate with most readers. Foster, too, is a wonderful character and I adored him right from the outset. Watching him tackle head-on Miranda (Harper’s daughter) in an only-eat-orange-things mood and be a complete success was a highlight and Foster only improved from there. I adored his interactions with Miranda and loved how seamlessly he fit into their home and family. With a deliciously happy ending and two strong, modern and competent characters there’s a lot to really enjoy in this story. I’m completely sold on the idea of mafe’s and am totally on board with trying more stories like this in the future.

A delight. I read it in one sitting. It’s got everything you need. Boy, girl, fairy princess, a little drama, laugh out loud parts, and a happy ending.