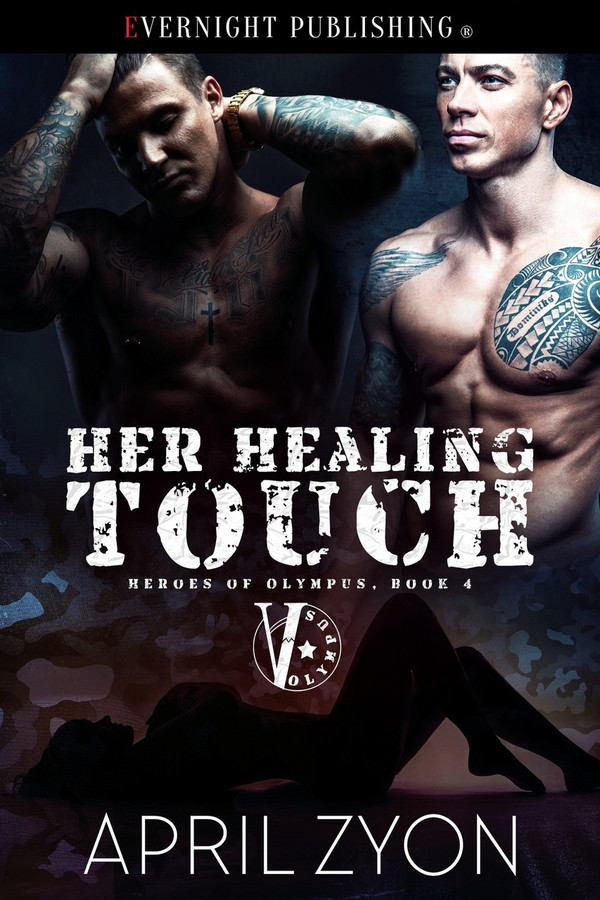 Dr. Hailey Davenport thinks that she’s nothing to anyone but her patients. Little does she know that her ex-boyfriend has used her for collateral for a massive debt that he’s racked up with the Russian Mafia.

When the gods realize the danger Hailey is in, they put the doctor under the protection of the Scions, twelve remarkable young men—but only two of them draw her in, Owen Lueger with his green-grey eyes, and Nolan Vedius-Calidus with his sexy as sin voice.

Owen and Nolan have watched three sets of their friends meet and fall in love within a second of meeting their fated woman, but they hadn’t believed that it would be true for them—until they meet Dr. Hailey Davenport.

It is a good thing for them that their sweet doctor is open for all of the things that they want to do to her and then some. Still, it will take all of their team, and a little divine assistance, to finally end the danger that is coming for Hailey, but end it they will. It is the only way that they can finally have their happily ever after.

Hailey rocked back and forth on her feet. She really was tired, but she had been tired before. “So, is it just you guys?” she asked with a frown. “Are you going to take turns on who gets the night and who gets the day and so on?” She heard the door slide open, but couldn’t see it with all the men that were in front of her.

“Nope, there are more of us,” Gareth told her from somewhere up front. The elevator began to empty out. Gareth waited for her and waved her into the foyer of the suite. “They’re waiting inside for us. I’ll introduce you before you pick the room you want to use—there are six up here—and then your dinner should be here.”

She walked into the suite with Gareth and straight to the windows. “Wow, this is a gorgeous view.”

They were at the top of the hotel and looked out over the city. It was stunning really. She turned around, and when she did lost all thought and all capability of speech. The two men that seemed to appear from thin air captured her attention and sucked the brain out of her head and air from her lungs, or at least that was how it felt in those moments.

“And there it is,” someone said from one side.

“Hailey Davenport, this is the rest of the team. Lincoln and Wyatt on the right, and the two you’re drooling over are Owen and Nolan. Guys, this is Hailey.” She heard a couple of hellos, but they couldn’t really compete with the white noise filling her head as she stared at the two men.

She just stood there and looked at the men. She didn’t hear anything but her heart rapidly beating. “Um.” She swallowed, hard. She struggled to find words, but for some reason, she couldn’t find words to bring forth. She thought she was brighter than she was acting right now, but she obviously was wrong because words wouldn’t come to her. The men were massive. They were night and day when it came to their hair color, one with midnight black hair and the other a bright blond. One had green eyes and the other blue, but they both caught her attention as soon as she had turned around.

“Hi?” It didn’t come out as a statement, more of a question because her brain simply wasn’t firing enough to make her come up with anything other than the two-letter word.

“For a woman that wouldn’t shut up on the ride over, that’s the best she can do?”

She struggled to find the right wording. What could she say that wouldn’t make her sound like a complete idiot around men who suddenly got her motor running on full steam? But she needed to keep her wits about her, to stay focused on everything happening.

“It’s the whole recognition thing, totally fries the brain. They’re not all that much better off.”

“Leave them be. It’ll start to clear in a few. Will someone get the damn elevator already? That’s her food, and she’ll be really pissed if they take it back to the kitchen while she was all dazed and confused.”

She shook her head and looked away from the two men because if she didn’t, she would lose herself again. “Yes, food. I’m hungry.” She noticed that she had moved from in front of the windows and instead was right there within touching distance of the two men that had struck her dumb. “I’m sorry, what are your names again?”

“Owen,” the blond told her.

“Nolan,” the other man said with a crooked grin.

“Food’s here,” Gareth called to her. “I’d come get it before they finish eating all the fries off your plate, and move on to something of more substance.”

“They touch my fries, and I will break their fingers,” she muttered without taking her eyes off Nolan. “Right, food. Sorry, but I need to eat. I—holy mother, you are both so good looking, I swear this is a dream. I’m sleeping, or dead, or maybe it’s from being so damn hungry, I just don’t know. I thought that these others were hot, but hell, you guys are even hotter. Wow.” She wanted to reach out and touch them to ensure that they were real, and she wasn’t dreaming. “I thought Tom was the best-looking man I ever met in my life, but he’s got nothing on you guys. At all. Holy crap on a cracker.” She covered her mouth when an unexpected laugh burst free at her wayward thoughts.

“Crap on a cracker?” Owen asked, hiding his smirk.

“I try not to curse around the kids, so I switch it up, well, unless you wake me up, or I’m really ticked off,” she explained, still snickering at the giant men in front of her, who she now thought must have been carved out of clay or something. But everyone around her looked puzzled as to why she as acting like a crazy impression of the Joker from Batman.

“Any idea what she’s going on about?” Nolan asked softly.

At his side, Owen shook his head with a bemused look. “Nope, not even the foggiest. But I think we can forgive her. She’s a little flustered, and a lot distracted right now. She really should eat something, too.”

“Right, yes, food. And I’m not confused.” She shook her head and got her mind back where it should be. “I was saying that you are all seriously hot. I thought that these guys were seriously hot, but they are nowhere near as hot as you two. Seriously, it’s ridiculous how cute you are. I bet your wives are thanking God every day for you.”

“We’re not married,” Nolan said with a grin. “Of course, neither are they, yet. Some of them are taken, though,” he added.

“If she’s not planning to eat the burger I’m calling dibs on it,” Dieter said. “I’m fucking starving.”

In book 4 of this series, we get Owen, Nolan and Hailey. I loved it from start to finish. April Zyon just does instant love so well and the characters are easy to fall in love with. I will be eagerly waiting for the next book and I just know it&#039;s going to be even better than this one because each book gets better and better.

Okay, this is book 4 and if you haven&#039;t read the first 3, why? I loved this book! Ate it up in 3 hours and now I want to read it again! Ms Zyon, you&#039;ve done it again. I admit, book 2 was my favorite before this one because the heroine in it kicked butt (her name was Kasper) but I think I fell even more for this book. Why? Ms Zyon added one of my favorites from Greek myth (please have a spin off!) Of Thanatos! He was in for a short time but he was quirky and not what I expected, much like several of this series characters. Plus the sex is hot, and the heroes, hello I will order 2 please! While I love the human aspect of this series, what makes it amazing are the Gods. (Please make a spin off series for the Gods. I would lo be to see Ares get his and see how he would react to a mortal wife.)

I voluntarily reviewed an ARC of this book. I love this series by Ms. Zyon. The men are strong and make the women intended for them feel safe almost immediately. And Owen and Nolan are the men who make Hailey not only dumbstruck but also feel safe. Her world has changed because of one date but she can&#039;t complain too much because it brought her Nolan and Owen. Nolan and Owen knew their was a descendant for them but were a bit unprepared for how that first meeting would go. I thoroughly enjoyed their initial meeting. I loved that Ms. Zyon made it memorable for the men and Hailey. I love that Hailey fit so well with her men. The insta-love between the character is something Ms. Zyon does really well and I loved that. This story is well written and enjoyable. I love the hints of turmoil Ms. Zyon places in each story and I can&#039;t wait to see how she will save the world, one menage at a time.