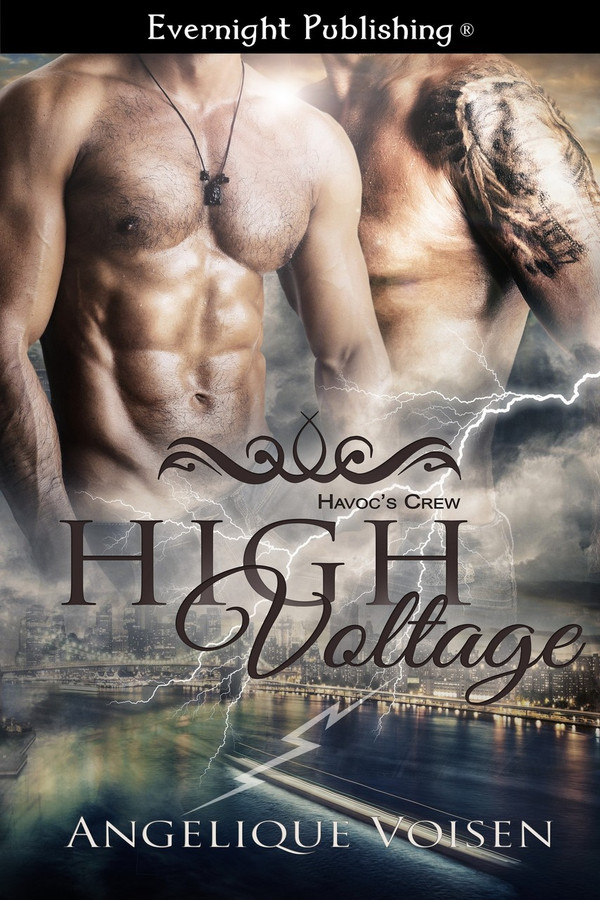 There’s a new player in Lyon City powerful enough to shut down the city’s electric lines and the job is right up Volt’s alley.

Volt isn’t always the easiest man or wizard to deal with. The only person sane enough to put up with his bullshit is his apprentice, tabby shifter Heath Bones, but even Heath’s patience is running out.

He wants Volt badly, but the elemental only cares about his work and his brothers at Havoc’s Crew. Quitting his job and leaving Volt is the best decision he’s ever made, right until he’s taken hostage by a major league demon.

Vanquishing demons, rescuing damsels and ravishing them after is all part and parcel of being a member of Havoc’s Crew, but Heath isn’t just any damsel. The more Volt tries to sizzle his desire for his apprentice into nothing, the more it threatens to explode into high voltage.

“This is a good dream,” Heath murmured, reaching out for one of his pillows to hug. “It even feels real.”

Volt was amused to see Heath rub at his eyes furiously. Heath’s eyes snapped wide open, taking in the interior of his room and finally resting on him.

He could see the panic in Heath’s eyes. Heath gripped at the sheets hard and his eyes were screwed tight in concentration. Volt had a feeling he was trying to shift, trying to run away.

He stood from his seat and sat by the bed, making sure Heath wasn’t going to escape any time soon. They needed to talk, and after talking Volt intended to have Heath. Felor’s return was as good as any wake-up call.

He’d stayed put all these years, convinced Heath didn’t deserve a murderer like him. Before, it never bothered Volt that Kevin’s death had taken away his heart. He’d felt it was fate’s way of adjusting the scales. Volt killed Kevin, so it was only right he could never love anyone again, but seeing Heath in danger made him realize he’d not only been a bastard. He was also a damn coward. Heath deserved an explanation. Volt needed him to understand why he was like this.

Volt placed a hand on Heath’s bare shoulder. “The doctor said you should take it easy. Take some time to let the poison seep out of your bloodstream.”

“Shit, this isn’t really a dream?”

“Shall I prove it to you?” Against his better judgment, Volt leaned closer and licked at a sweet little spot between Heath’s shoulder and collarbone. Perhaps it was the years of keeping away that made him act like this, but Volt could no distance himself. Heath was an adult now. He’d just turned twenty-one a few months back, and more importantly, he knew Heath wanted him.

“Weren’t you the one calling my name in your sleep?” Volt watched Heath’s face heat up. He could see denial was on the tip of Heath’s lips, but it died the instant he closed his mouth over Heath’s tender flesh. He sucked at the slightly salty skin, enjoying the taste of his apprentice. Heath let out a sigh, but Volt found a hand pressed firmly against his chest seconds later.

“Don’t. I don’t know what game you’re playing, but stop,” Heath whispered. He let out a startled sound when Volt’s arm curved around his waist and pressed closer to him.

“I’m tired of games, Heath. Tired of pretending I don’t want you, but I don’t take unwilling lovers,” Volt said against his ear.

He flicked at Heath’s earlobe with his tongue, feeling Heath’s harsh breathing against him. “Tell me you don’t want me, and I’ll stop.”

“I don’t want you,” Heath muttered.

“You’re lying. I can always tell when you’re lying.” Volt bit down on Heath’s earlobe, wrangling a needy sound out of him. “I can feel your eager cock pressed against me, Heath. I can feel your quivering little body sighing against mine.”

His own cock perked up in his trousers, and heat began to fill his belly, eager to spread to the rest of him. Heath clutched at him tighter, not pushing him. It was a good sign. Heath’s minimal resistance made his claiming all the sweeter. Volt knew deep down, Heath would never openly admit he’d already given his sweet self to his master.

“Tell me, Heath. Why are you fighting me so hard?” Volt asked, nipping his way down Heath’s neck, liking every shiver and sound coming from him.

Volt stopped to look him in the eye. “I’m never going to hurt you, Heath. Never. Get that into your fucking head.”

High Voltage is the second book in the Havoc’s Crew series by author Angelique Voisen. I will say this book is a letdown compared to the first book. Maybe I was expecting more, but this seemed to lack the fire and soul the first book had. However I know that sounds like I hated it, I didn’t, I just felt let down is all. Volt is a great character. He conjured a demon when he was a kid. He couldn’t control said demon and it cost him his best friend’s life. This scarred Volt. He is scared to find love again because the demon is still on the loose. Havoc took him in changed his life, but he cannot let go of that fear. Heath now Heath I adored. He is funny, kind, and just who Volt needs. The light to his darkness. He is getting tired of Volt not letting him in. He actually tries to leave his teacher. But can Volt let him go is the question. This has some great characters. Lots of friendships and world building in this book. I would suggest reading these books in order they do build on each other. If you love this series I think you would love this book too. For me the first book had better writing and more connection but this book does a great job of moving us along and building friendships.