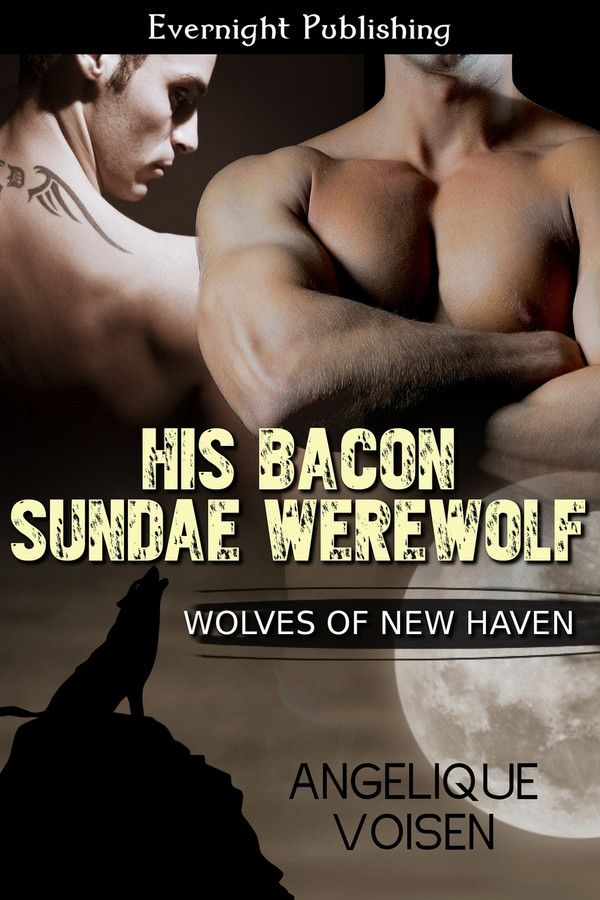 After his mate died from cancer, Pat Bolton closed his heart to love. Despite the support of his pack, Pat wants to follow his mate into death…until he meets Jules Gutierrez. Enigmatic, gorgeous and funny, Jules embodies everything Pat wants in a new mate. Unfortunately, Pat suspects Jules isn’t straight or a werewolf.

Behind his easygoing mask, Jules is a lone werewolf driven by revenge. Hot on the trail of a killer who brutally murdered his mate years ago, Jules has no time for distractions.

Werewolves mate for life. When their mates die, they soon follow, so Jules doesn’t understand why both he and his beast are inexplicably drawn to Pat. Grief brought them together, but with a dangerous killer on the loose, will they be able to reconcile their differences and let go of old ghosts in order to move forward?

“Jules,” Pat murmured, suddenly unhappy to be caught gorging on a couple of bacon sundaes.

The grin sat well on his face despite the stubble there. It also sat well with the small and sexy scar near his left jawline. Pat had spent a good number of hours imagining how he’d use his tongue to trace that little scar. Imagining what Jules’s skin would taste like.

Sometimes, when he was alone in his bed, he’d imagine it was Jules’s body pressed against him, Jules’s stubble tickling against his skin as the other man teased and tormented him with his talented mouth and tongue. It was Jules he thought about, not his dead mate. Guilt would then worm its way into Pat’s heart and unexpected grief would fill him. Then the uncontrollable sobbing would start. After that, the miserable shakes. As if Desmond was punishing him for thinking about other men.

Desmond’s dead. Pat hastily shoved the grief that threatened to bury him back into the past. He cleared his throat.

“You’re not hard to forget,” Pat said drily, and noticed with interest that Jules was also holding a cup. A bacon sundae.

Noticing where his eyes went, Jules laughed. “Guilty as charged, man. These things are damnably addictive aren’t they?”

“Yeah they are. You missed the meeting, too?” Pat asked.

“Sometimes it’s fine playing hooky once in a while, yeah?” Jules winked at him like they were conspirators. “I mean, don’t get me wrong. They never fail to inspire, but sometimes the same old thing gets stale. Although for you, you’ve only attended like what, two meetings?”

“Three actually. I didn’t miss the meeting on purpose,” Pat immediately said defensively. How did Jules know he only attended a few meetings? “Today was…special. Besides, you can afford to skip a meeting or two. The way your body’s shaping up, you can afford it, but it still doesn’t give you the right to judge others.”

“Whoa. I have to stop you there, Pat. I wasn’t making judgements. I’m sorry if you misunderstood that.” At his silence, Jules continued. “You think I’m shaping up nicely, then?”

Jules glanced down at his body. He shrugged and Pat wasn’t surprised by his nonchalance. Jules looked like the kind of man who never took anything too seriously.

“Dream on.” Even though Pat said those words, he still felt his cheeks turn pink.

He was in fact, eyeing Jules’s body beneath his faded leather jacket. It wasn’t there yet, but Pat could imagine what it would look like with firm and well-toned muscles. What would it feel like to run his hands over his chest and the taut muscles of his stomach and abdomen? Would Jules’s eyes darken with desire? Would his pulse speed up at the mere contact of Pat’s touch?

Wolves of New Haven Bk 4. This bk the fourth of the series is a light quick easy and enjoyable read.This Book is about Pat and Jules. At the end of the book (which really I didn&#039;t want it to finish)I just wanted the next book, which I was very lucky as I had kept my eye on the books and waited to 5 books of the series was out before starting.4 books down 1 to go loving this series. But I would assume there will be many more books to this series other than the 5 currently released.

&#039;His Bacon Sundae Werewolf&#039; is book four in Angelique Voisen&#039;s series, &#039;Wolves of New Haven&#039;. I like this series, although I wish the stories were longer. Each of these fated mates are sweet, and finding their happy ever afters is such fun to watch. In this installment, both of the men&#039;s mates have died, and they&#039;re really struggling to go on. Pat&#039;s mate died of cancer three years before, and Pat&#039;s been unable to go on. He&#039;s substituted eating and swallowing his emotions, ballooning way up in weight. Jules lost his mate to a killer, and Jules has tracked him to New Haven. Jules and Pat meet at a Weight Loser meeting, where they&#039;re both trying to get back into better shape. There&#039;s something about the other that has each of them wondering, and it doesn&#039;t take long before they realize they&#039;ve been blessed with a mate again. Unfortunately, the killer Jules is tracking has taken an interest in Pat. This was a really good addition to the series. Pat and Jules with their bacon sundaes were really adorable. These two guys deserved every moment of their newfound love and joy, after everything they&#039;d suffered. Another easy and enjoyable read.

Each book in Wolves of New Haven collection features a different romantic couple. To enjoy the overall story arc and crossover characters, I would recommend reading the series in sequential order. I think what gives me a kick is the titles of these books. I love the fact that you can tell that there is some humor in them just from the title alone. Although I am not too sure about bacon sundaes, it is a cool idea considering how many guys would probably eat it. This story shows what it feels like to have lost your mate and how to get the strength to keep on going. Pat had lost his mate a few years ago to cancer and Jules had lost his to a killer of werewolves. They both dealt with pain a bit differently although they were both slowly giving up. Pat had gained weight and had slipped into depression, where as Jules decided to go after the killer. Jules had in fact been led to New Haven where he runs into Pat at a local gym. He was turned the hell on, but his mouth over ruled his brain. He wasn’t sure how to make things right. Then the shock of the fact that they were mates brings in a bit of sunshine to their lives. Now all they have to do is to get rid of the killer and buy some more bacon sundaes. This story was a blast to read. I had not laughed in so long at certain parts of this story. It was so much fun to lose myself into it. Usually you can tell when an author puts her heart into a story and this was one of them. Although I do wish that, they were a bit longer. I wanted to hear more about them but it was a great story for me. I would recommend reading this if you love two sexy men, wolf shifters, excitement, surprise, danger, and hot, tempting sex. I loved it and cannot wait to get my hands on the next story.