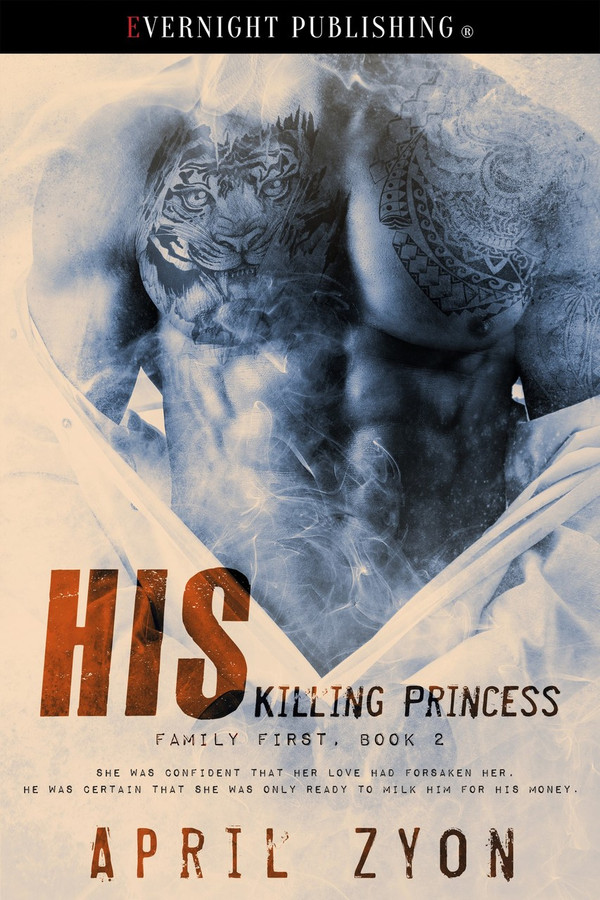 Antonio Bruno always knew that secrets and death were a part of the life he chose, so he never intended to fall in love with Emily Reynolds, a woman who embodies innocence. He attempts to shield her from his life as second in command of the Italian Mob, but sometimes the best-laid plans can come apart at the seams.

Emily is no stranger to secrets herself.  One thing she’s always been truthful about is how much she loves Tony. When a home invasion steals her from his life, one twisted lie turns into another, pitting these two lovers against one another.

Despite the odds, there’s a chance Tony and Emily can fight to save their relationship. That's if they aren’t killed in the process of finding the traitor in the midst of the Italian Mafia. Can these star-crossed lovers weed through all of the deception? And how far are they willing to go to be together?

She sighed and closed her eyes. God, she had so much to tell him. She just prayed the man would understand. Then again, he was a killer as well, with a code as strong as her own. She lay in their bed and waited for him. As soon as he entered the room, all thoughts of telling him anything flew out the door and instead she knew he needed to simply forget. They had been together for five months, in that time they hadn’t used protection from the first moment they got together which brought her to the thoughts she was having about their futures now.

That was the thing about them sharing professions. She could read his body language better than he likely knew she could. Emily rose to her feet and walked to Tony. As she moved toward him, she stripped out of her negligée and stood before him in all her naked glory. She knew what he saw. Emily wasn’t shy about her body any longer. She now embraced her womanly attributes, and that was all thanks to Antonio.

She had scars, ones that couldn’t be hidden but had been explained away easily enough with the smallest of lies, ones she had hated to tell him and couldn’t wait to tell him the truth on. As he had told her before, her breasts were the size of ripe grapefruits, her skin a pale milk color, and her hair as red as fire. Or so he liked to tell her.

She moved to Tony silently and began to strip him of his clothes, loving the way her pale skin looked against his very dark skin. Sliding Tony’s shirt from his body, she scraped her nails over his beautifully toned six pack abs and looked up into his troubled eyes. “Hard day?” she asked while working on his pants.

She felt emboldened by this man. It was hard to imagine that before him she had been a virgin. She had killed a hundred horrible men but never had taken a lover. Tony had been intense, wonderful, and she had known from the moment she met him that he was the one for her.

“You have no idea, sweetheart.” Tony took her hand in his and shook his head. “You know that is not how I play.” He growled lightly at her and then leaned down, taking one of her nipples into his mouth and suckling hard. “I do love being greeted at the door by you naked, however. From here out I think you should greet me like this when I come home, but only when I text you and tell you I’m coming home alone. I would hate to kill a friend who saw my woman naked.”

She shivered. Had any other man demanded anything of her like that she would kill them and leave their bodies for the cops to find. Period. She wasn’t one to be commanded, but with Tony, it turned her on. She seemed to need it. “Yes, Sir.” She bowed her head in supplication. She knew she would do anything he asked her to do. She would because she knew he would always ensure she had pleasure, no matter what. Tony would do anything for Emily just as she would for him.

“Only for you, Emmy girl, only for you,” Tony said only a second before he picked her up and carried her to their bedroom.

Emily held back her laughter when he tossed her on the bed, because she saw the look of sheer bleak need on his face. She reached back, grabbed the headboard, and watched him strip. He all but radiated the need to control, the need to dominate in a way that eclipsed anything they had ever shared before, and it almost scared her, almost.

We’re back in the dangerous shadows of the mafia in His Killing Princess. Antonio and Emily are star crossed lovers who have gone from enemies to lovers but can they survive when a traitor is discovered? First of all, I love the cover. Gorgeous! Second, this book is even better than the first in the series. Antonio and Emily have great chemistry. The sexual tension in the air is enough to make my hair stand on end. Love it! The story itself is really great too. There’s suspense mixed with sex and a lot of lies. There is so much happening in this book and it balances perfectly with our main characters. If you love romantic suspense, this book is perfect for you. ​ His Killing Princess is a wild ride with engaging characters that you have to read!

This is the second book in the Family First series by April Zyon, a favorite of mine. This one is a little bit of a darker read, but it’s still a great book and full of page turning satisfaction that we’ve all come to know and love from Ms Zyon. Emily has a great many talents and killing is one of them. She’s with an organization that takes out the bad guys. The rapists, the child molestors, the killers. She’s alson in love with Tony. But Tony has no idea who she is. Tony is a killer too, and one day, someone decides to take Emily away from him. Will he get her back? Will her 5 hulking ‘brothers’ let him? You’ll have to grab yourself a copy to find out! This book was so, so, good! Emily was a tough, sassy girl who could stand on her own, but she reveled under the love of a good man. And Tony? Tony is a wonderful dichotomy who loves hard and fights just as hard. April knocks this one right out of the park!

Right from the get go, the story takes off as Emily is introduced. What a great character, and a being a strong woman in a profession where men usually rule. She is a force to be reckoned with and it takes a strong man to win her trust and love, this is where Tony comes in. Their chemistry is off the charts, their love is what dreams are made of, Tony dominates her in bed and she wouldn’t have it any other way. But they each have their secrets, just as they are about to reveal them, they are forcefully separated. I won’t go into too much detail but goodness gracious what these two go through is not for the faint of heart. I felt for each of them and could not wait to see how the author was going to bring them back together. I highly recommend this story, it’s full of love, some explosive love scenes, tender moments, and you can truly see what makes a family (and not necessarily the traditional type of family).

I loved book one in this series and didn’t think that it was possible to take this series to a new level.But how wrong was I! His Killing Princess had me gripped from the very first page! I found myself entrenched in the storyline, anxiously awaiting what was coming next. I loved Tony and Emily’s stories and if you are looking for something with action, suspense and romance, then is one book you should definitely read.

His Killing Princess (Family First Book 2) by April Zyon Another fantastic book from April. She captured my attention for the very first page. You can’t ask for anything more than what this book gives you, murder, secrets, lies, kidnapping, love, lust, domination, family and heartbreak. What else do you need? Generally, in romance books you have 2 strong characters but in this book the characters are evenly matched in my opinion from their careers to personal preferences. True soul mates. Meet Emily Mazimillian barely five foot tall delicate women….hahaha not hardly. She is stronger than you can possibly imagine. Her small stature and delicate features is the perfect disguise for her profession. She only hopes that her secrets don’t scare him away. Antonia Bruno (Tony), right hand man to the Italian mob boss. His life is full of dangers that he tries to keep from Emily, the love of his life. He is afraid if she knew what he was they would not be together. Well let me tell you that is not the case. First off the chemistry between these two is explosive but mutually beneficial. Without giving to much away the need for Tony he needs to dominate Emily in the sex life. Emily willingly submits, but only to him. There is a lot of action in this book and carries throughout the entire thing. I must say I didn’t like the turn the book took but was happy that is all worked out in the end. It has been a while that I wanted to strangle the characters in a book and want to bitch slap them into seeing what they are missing. I wish I could go into more details because there is so much that happens in here but I can’t give away the secrets in a review where would the fun be for you to read. If you are still doubting the need to read this book I promise you will not be disappointed. What you will read in the first few chapters in this book will draw you in and have you surprised by Emily. Highly recommend this book.

Loved it! This book was amazing, I didn&#039;t think she could top the first book but I was wrong. And the Horsemen, holy hotness tell me they are getting their own spin off because I want to order off that menu please! In all seriousness though, this book was great. I laughed and cried. My heart broken for Emily and I wanted to beat Tony for being such a d-bag. I think that&#039;s about my only complaint, she let&#039;s him off the hook far too easily. Other than that this book was really good. Not what I expected but really good.

His Mafia Princess by April Zyon