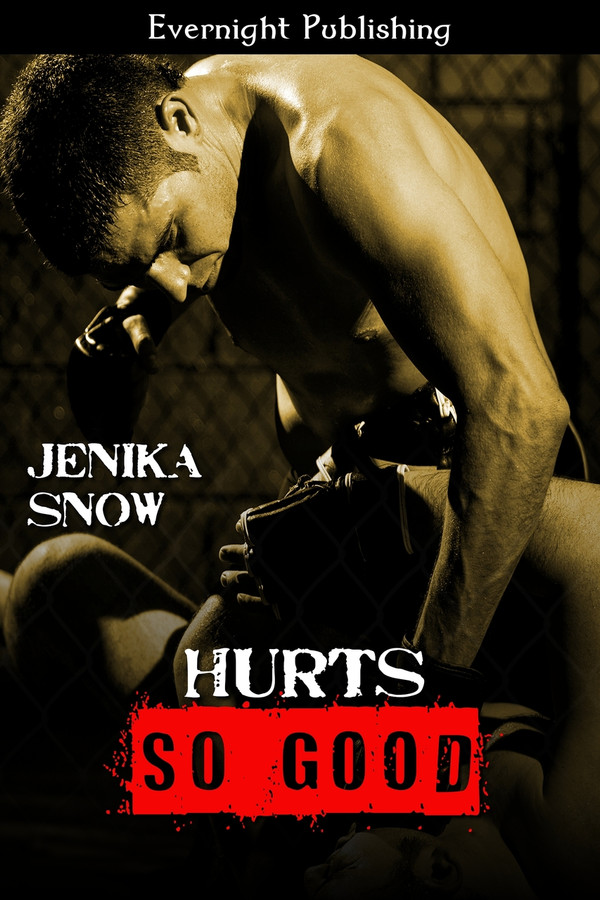 The Fighters of Absinthe, 3

After Mack Draycovich's parents died, he pushed away everyone, including Jane, the girl he loved. He turned to alcohol, drugs, and back alley fighting to ease the pain he felt inside. It wasn't until a retired MMA fighter took him in and helped him channel all of his aggression into something productive that things began to change. Ten years later and Mack has his life back, but he has never forgotten about Jane or what she means to him.

Jane Reynolds left the man she loved when he turned his back on her for the chemical kind of comfort. Years have passed and she is back in the town of Absinthe. But when she sees Mack fighting brutally in an abandoned warehouse and her love for him rises violently to the surface.

But Jane has someone in her life. Can Mack show her he is worthy of her love before she commits herself to another?

He braced his elbows on his thighs and tapped his foot as impatience, adrenalin, and endorphins slammed into him, moved through his bloodstream, and revved him up even further. He cracked his knuckles, rolled his head on his neck, and straightened in the chair. The sound of his phone vibrating in his bag was getting on his fucking nerves. He knew it was Taylor, but he didn’t have time to hear him bitch about how he had left without him. He should have turned the damn thing off, but talking on his phone was really the last thing on his mind. The air in the basement of this abandoned warehouse was dank and cold, but even in only a pair of track shorts Mack was hot. His blood was pumping something fierce through his veins.

“Mack, are you even listening to me?” He looked over at Tanner, who was all but in his face. “You need to hear about the guy you’re up against.”

“I don’t need to hear anything. This will be a quick fight.”

Tanner exhaled loudly and threw his hands up in the air. “Dammit. I hate when you fight in such a fucked up mood. Knocking these assholes out so fast makes people scared to bet against you, and that blows in the end when money is being passed around and the underdog wins at the last second.” Tanner was still running at the mouth, but Mack had since tuned him out. Yeah, he knew that knocking guys out with one hit didn’t help things when it came to cashing in. Bidders tended to get skittish in betting against Mack if they knew what he could do, but there was always the opposite effect to that, too. But did Mack give a fuck? No. He needed this. He needed to hurt someone as much as he was hurting right now, and feeling his fist slam into another asshole’s face and body would sure as hell make him feel better. One of the reasons Mack had decided to fight in the underground circuit was because of the lack of rules. There was no tape or gloves protecting knuckles, no head gear or safety equipment. Hell, the only thing they wore was track shorts. This was raw, unhinged, and bloody as fuck. Bones broke, people could die, did die in fact, and there was no one to stop them. It was dangerous as fuck, but everyone going into the cage knew that before they agreed to participate. The money was good for the winners, and was incentive for a lot of guys that didn’t know what they were doing. Underground fighting was also one hell of a thrill, and it allowed Mack to let off the anger and ugliness that festered inside of him on a daily basis.

“Dude, at least put on a show, make them think this is one of the times you just want to get your ass handed to you.” Tanner was a friend, but he also was in this game for the money. Mack didn’t bother telling him that this was his fight, and he would handle it the way he wanted to, because the look he gave the other man had him raising his hands in defeat, letting out a string of curse words, and turning toward the door. He opened it, spoke to someone right on the other side, and then closed it again. “It’s a full house out there tonight, and the money’s rolling in.” Mack was all about getting paid for these fights, but tonight he couldn’t care less. He wanted to knock someone’s head off, didn’t care if they got severely hurt in the process, and was more than ready to have the opponents lining up. He could go all night, and that was his intention until he was too exhausted and he crashed for the next twelve hours. He just kept seeing that image of Jane kissing that fuckwad, over and over again, until his knuckles ached from clenching his hands so hard, and he was ready to get in the cage. He stood, flexed his arms, and bounced on the balls of his feet.

“Let’s just get this shit rolling.” Mack ground his teeth and glared at Tanner when it looked like he might say something. “You worry about the fucking money and who is going in the cage with me, and I’ll worry about the fucking rest. Sound good?” He said the last part in a hard tone, and it was a rhetorical question because he sure as fuck didn’t expect an answer.

“What the fuck ever, man.” Tanner started cursing under his breath again, but turned and started talking to one of the big fuckers he normally brought with him as security.

Mack headed toward the scarred door, pulled it open, and took a moment to stare at the crowd. Tanner hadn’t been kidding when he said it was a full house. The bodies were shoulder-to-shoulder, and the scent of sweat and booze filled the air. Some people saw him standing there and started going crazy in their excitement. Tonight they were about to see a lot of blood cover the mat.

Jenika Snow&#039;s world of The Absinthe Fighters is filled with men with pasts that haunt them and a burning need to fight in the underground fight clubs. They train for hours never expecting that they will find a women that will complete them and bring them peace. Such is the basis of Hurt&#039;s So Good. Mack Draycovich and Jane Reynolds fell into love in high school. Each knowing it was a love that would never fade. With the future bright they give into their desires and are later torn apart by the death of Mack&#039;s parents. It is over ten years before they meet again, only to find that their love and desires are as strong as ever. Yet old wounds are still bleeding and trust destroyed is hard to rebuild. Ms. Snow is a wonderful writer with a mind that that develops strong characters, both men and women. They are made more human with the pains they have endured and their willingness to persevere in spite of them. She gives a background on which there romances are built and become believable. Her love scenes are bold and scorching, but not written just to appeal to the readers need for sex. They may not always be tender, but they are true. With Hurt&#039;s So Bad, Jenika Snow has out done herself. There is something special about this story. I believe it is the history the two shared and the survival of a true love over time and distance. Even though this is the third in a series of books, it can be read as a standalone. I on the other hand suggest reading the series from the beginning, just so you can better understand all the character interactions fully. Not to mention the other books are great reads as well. I cannot wait to see where Ms. Snow will go next in this series. If you are looking for a new author or have not read her books lately, check them out and find out why her stories remain so popular no matter what series you are reading. Each series is different, but all are done with a style and talent that you will appreciate.

Mack&#039;s had a tragic past and Mack pushed Jane away. They reconnect after 10 years and there is still such a chemistry between these two. It was a fast moving book and I enjoyed it.