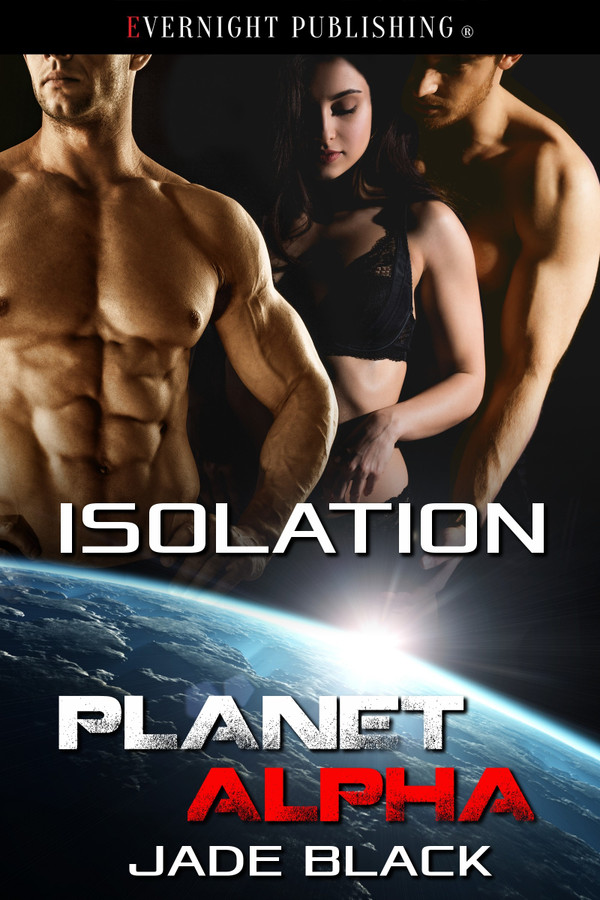 Leah has one goal in life: to find a new planet for the humans ineligible to be Alphan mates. When the trading ship she purchased a berth on docks with a scout ship, her lack of ability to tell the difference between Alphans and Xyrans gets her into trouble.

Unwilling to leave the human with the vulnerable trade ship, Nalan immediately offers her a new place with them, knowing this chance to bond with a human woman might be their only one.

As captain of the Zyzan, Gelar’s primary concern is making sure Xyran pirates can’t flank Alphan space, along with enjoying the year alone with his mate Nalan. To find a human this far out should have been impossible, and yet her ability to survive on the poisonous ship just to make a living intrigues them both. Humans aren’t allowed to leave Earth without an Alphan mate. Will her dreams doom the three of them?

The three of them crowded into the room and the door shut behind them, though Leah made sure to be the closest one to it. She wasn’t going down without a fight, but if this was how she was going to be introduced to being a sex slave, it was an unusual one.

“You are aware that Gelar and I are bondmates,” Nalan said, turning to her. “We have not hidden this from you.”

She shrugged. “I’m not homophobic, if that’s what you were driving at.”

“I want you to teach him,” Nalan said, pointing at Gelar. The other Alphan colored slightly, but he kept his gaze level with hers despite the height difference.

“How to suck cock properly.”

This is a noticeably short story featuring Leah who is a young woman who has been in space looking for a place for humanity to live. Earth has become almost unlivable. There is a lot of poison in the air which is causing people to die daily from respiratory issues and cancer. The weather was also getting much worse with tornadoes becoming deadlier, a drought could last for years, and there were food shortages. She had lost her parents during a hurricane and wasn’t sure what she was going to do until she met the Vagnashians. She has been on their ship for two years trading what supplies she had such as rugs, blankets, pottery, and silk sheets. She needs an environmental suit if she wants to go outside. Vagnashians enjoy an environment heavy with sulfur, and no matter how much she tries, she always has a small amount around her. She considers this an improvement on what could have happened as she had read that the Alpha and Xyran male species seemed to pass women around. Her life completely changes when meets Nalan and his bond mate Gelar, both of whom are Alphas They came to trade crystals the other species use for their communication devices. They were both taken aback by her presence, as it was dangerous for a human female to be alone on the fringes of space. I love how Nalan got to her to decide to go on their ship. As it turns out, what Leah read about the Alphan society was completely wrong. They do not keep slaves. They told her that they prefer their mates to come to them willingly, both men are taken with her and have a great imagination of what they would like to do with her. It was fun watching them learn just how sexual a human can be and how open minded. She would have not been able to choose between the two and that is why their relationship works. There were a few things that I would have liked to see change. I wish the story had been longer so the reader could get to know more about the Alphan society and their fight with the Xyran. It would also have been nice to find out exactly how the warriors bonded and what exactly is causing the female birth rate to be low. It is hinted at but not clearly explained. I also would have liked to get more of Leah’s background and watch her more slowly fall in love. If you’re looking for a menage story, then this might be the one for you.